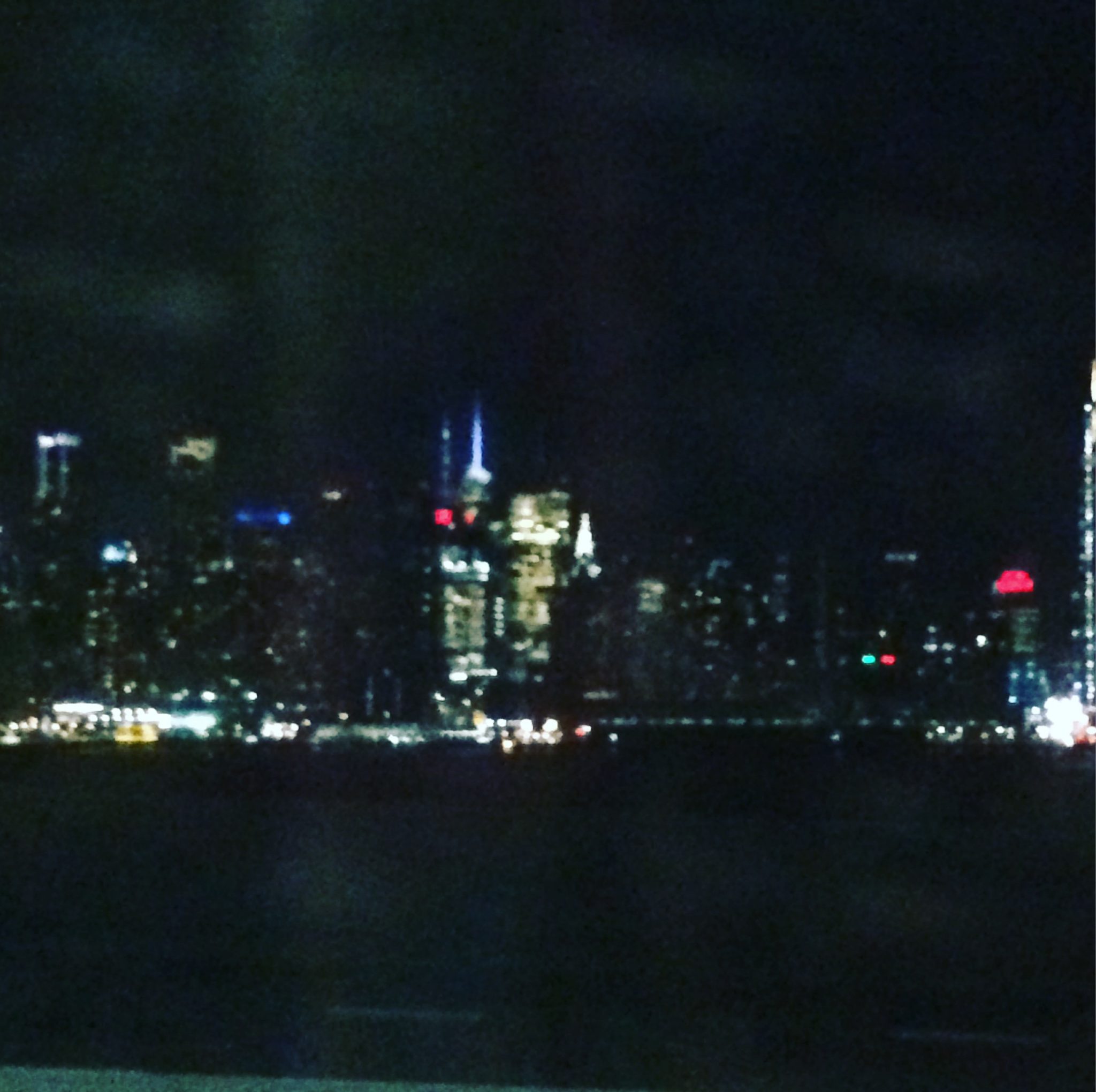 Guys, let me tell you about the New Jersey Turnpike.

See, you never really know how much you love something until you lose it. This was how I realized I was stanning Sasha Velour in season 9: when it looked like she might be in danger of having to lip sync for her life, I felt my heart dissolve like an Alka-Seltzer tablet in water and I realized, OH NO, I love her!

And it’s the same thing when your Greyhound bus is driving down the New Jersey Turnpike.

As soon as I come outta the Lincoln Tunnel and I’m looking at the skyline from the Wrong Side of the Hudson, I panic. Every time. It’s like there’s an astral version of me that runs up to the front of the bus, shakes the driver by the shoulders, and pleads, “TURN IT AROUND! I’VE MADE A TERRIBLE MISTAKE!”

A mistake that is only rectified on the return journey, at the point on the New Jersey Turnpike when the tip of the Empire State Building first becomes visible.

You all know, by now, that this has been a hard year for me. I can still see it in the way people look at me: as if I’m a fragile doll, a Yankee Blanche DuBois, who might fall apart at the mention of The Wrong Word. Well. You know. I’m soooo emotional. It’s true.

But I don’t think it’s necessarily the worst thing — having all these feelings. Take, for instance, my trip down the New Jersey Turnpike four days ago, returning from Christmas with my parents:

As the tops of those tall buildings pulled into view, my playlist started inexplicably belting out John Denver’s “Annie’s Song,” and if you don’t know it, you should look it up, and play it for your lavahhhh. It’s the one with the dripping guitar and soaring strings, and it goes a little something like

And I’ll be ding-dong-danged if, hurtling past sparkling neon and chrome diners, my senses weren’t absolutely full to the brim? I’m telling you, I am so in love with New York. If it made any sense, I would sing to her:

On September 8th, 2017, I celebrated my NINE YEAR ANNIVERSARY with New York City. What brought me here was a stomach flu.

In seventh grade, back in Binghamton, New York, I got sick. My dad took care of me. He did this by plonking me on the sofa in front of Turner Classic Movies, because THIS WAS IMPORTANT: West Side Story was on the TV!

I had NO IDEA what that meant. Dazed from vomiting and weak from stomach cramps, I melted into the couch in the den and took it ALL IN: the twirly skirts, the ballads on fire escapes, and by the time the credits rolled, I knew I had to ?be a part of it ?: and I was in loooooooove.

Let the record show that I am, at present, wearing a souvenir T-shirt emblazoned with the logo “I Heart N Y” purchased unironically for myself in a gift shop unironically IN times square.

I am – how do you say? – NOT very choosy when it comes to slinging that word around – LOVE. I’d as soon give my heart away as I would give a MetroCard swipe. Hey, I just met you and this is crazy, but HAVE MY WHOLE ENTIRE HEART PLEASE!

And I’m proud to say that I am very close to Borough Bingo! That is to say, I’ve lived in three of the five boroughs. Queens was first. In Forest HIlls – sorry, FAAAAAHREST Hills. Have You been? Yeah, didn’t think so. But I had my eye on Manhattan, and Washington Heights was next. Overlooking the GW bridge. And then Harlem. Then I gave my heart to a Brooklyn boy and across the East River I went! Hello, Greenpoint, Hello G Train, hello Bee-Kay-EL-Why-En.

All this hopping around has only deepened my love for NYC. When you love someone, you know everything about them and love them, regardless. Unconditionally.

In my current abode along the East Williamsburg/Bushwick border, I am surrounded by cold industrial harshness and vibrant street art, hipster’s and Boar’s Head Meats warehouse.

There is no part of New York that I’ve seen that I haven’t ADORED. Yes, even the trash-lined streets! And the plastic bags in the trees! And the blood-curdling smells! And your crumbling infrastructure! YES! And the near constant symphony of car alarms and SIRENS!! Yes! —

But when you’re in love, how do you know they love you back? It’s one thing to, as I so often do under less-than-perfect circumstances, give your heart away, it’s quite another thing to get that love in return. As good as I am at giving, I’m not so great at gettin’. And here’s where I know that New York loves – “hearts” – me back.

In all the NINE years I’ve ever taken the subway, I’ve never once thrown up on the train. That, in itself, is saying A LOT. But I have seen puke on the subway – and let me take you back to VALENTINE’s DAY, 2009, on the F train, all dressed up and riding from FAAAHREST HILLS into Manhattan to meet my then-boyfriend [name redacted].

Now, the F train from FAAAHREST hills to Manhattan is like REINCARNATION. After being buried underground for what feels like an Eternity in Limbo you RE-EMERGE into the Upper East Side! HALLELUJAH!

And as I’m eagerly awaiting my first Valentine’s Day in New York City, I notice the toddler opposite me squirming in his orange plastic seat. His mom is angry, she wants him to sit still, she gives him a smack on the back, and PLEAARRRRRRGH  it’s like she jolted loose this torrent of white chunks that this kid was tryin’ to hold in

It’s just  –  there is SO MUCH PUKE, you guys, I’m not even grossed out, I just kind of respect this Kid now? It’s like, impressive that this Pint-sized tot could contain SEVERAL pints of what looks like extra chunky cottage cheese?

His mom is NoT amused, yelling at him to stop, but The Puke! It keeps on coming! It’s dribbling down the uneven floor of the car, it’s splashing up onto her pants-leg – HAPPY VALENTINE’S DAY! But who DIDN’T get splashed with puke? Me. In my fancy date-night outfit. I alone emerged from Puke-pocalypse Twenty-oh-Nine completely un-puked-upon. New York HAS to have my back.

And I’ve made some bad decisions in my time here. By all rights, something Way Worse oughto have happened to me. Like right before Hurricane Sandy in 2012, when I met a guy on the street at Broadway and 145th. A white guy with dreadlocks in Harlem. Ughhhh. But he’s cute, he asks me where the laundromat is, and as I happen to be walking there, I say, “Come with me!” He’s Dutch, he drums in a jazz band, he needs help folding the bill in half to make the change machine accept it. He leaves, time passes, the laundromat phone rings. The lady who works the desk looks at me, covers the receiver with her hands, and thrusts it in my direction. “It’s that boy, He wants to talk to you.” He called the laundromat hoping I’d still be there because he forgot to ask my number and

Reader, I fucked him. I fucked the white guy with dreadlocks who picked me up by calling the laundromat and what’s worse is NOT the fact that the sex was AWFUL, but that the condom broke.

THE. CONDOM. BROKE. No sooner could I ask what happened than he’s out the door and I’m googling where to buy Plan B on a Sunday Morning in Harlem. Across the street from a church, as it turns out! So while gospel music spills out onto the street, I’m running to pick up the pills within the 72-hour efficacy window and on hold with Planned Parenthood to get tested for STDs. What is my LIFE???? It’s been nine years in NYC of making similarly terrible mistakes and I’m still HIV-negative and generally healthy all around, thanks to the fabulous network of doctors, hospitals, therapists and bodegas that deliver Pepto Bismol your actual door. New York, you saved my life more than once.

Love makes you do the wacky, and what I did – to celebrate five years in New York – was walk into one of those scuzzy tattoo parlors on St. Mark’s Place -now this was Saint Mark’s Place, mind you, BEFORE it was all Ramen restaurants and 7-11 and tourists – and get this little apple on my wrist here, this symbol of love for my Big Apple, and GUESS WHAT? It didn’t even get infected! You can’t tell me THAT isn’t a sign that New York’s watching out for me!

Look, I don’t have to be possessive. I’m okay with New York seeing other people – eight and a half million, if you must – because I know what I have is something special.

Nine years. That’s the longest relationship in my life. And even though I guess I’ve cheated on New York here and there with boyfriends and silly infatuations and Dutch drummers who picked me up in the laundromat …

every time it ends, there’s always a New York miracle that reminds me who my true love is. Invariably, I’ll catch myself looking up at the skylines or into windows or across the river from the IKEA ferry and realizing that The One that stops my heart in its tracks was there all along.

New York, I see you. You make me feel safe. You’ve got my back. You never let me feel alone.

I never get sick of you, never stop being amazed by you. My breath catches when I think of our future together, exploring you and discovering you and being surprised by you. You make me feel like I belong right where I want to be. I have a feeling this one might last.

I Heart You, New York. I Unconditionally Heart You. 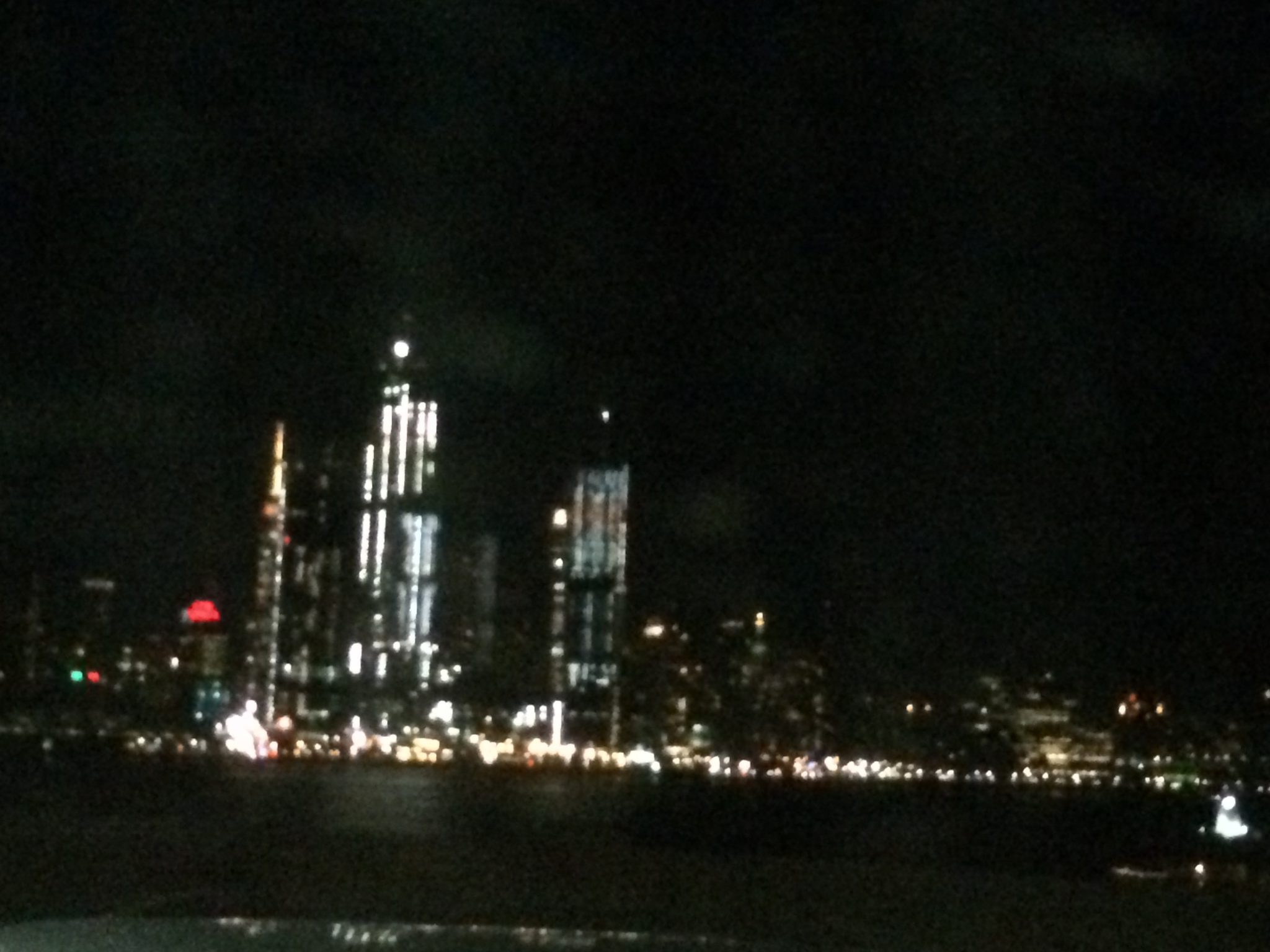