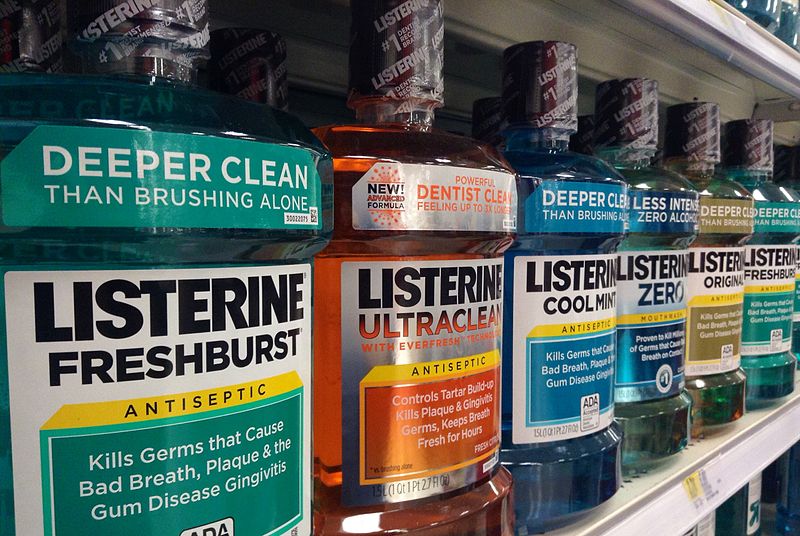 I, my friends, am a born follower.

Okay, okay, that was a bit of an extreme example, but I think it follows that, if you’ve ever gotten swept along by a clique of friends and wound up doing things you never thought you’d do, you’re probably a born follower, too. This isn’t to say that I can’t take charge when I need to! I’m adept at managing tasks, delegation, and orchestrating large-scale operations (see: Burning Man). But I’m also, how you say, a pushover. If someone else has a stronger opinion on something than I do? Well, okay, alright.

I figured this out when I was buying mouthwash.

Two flavors. I don’t have a strong opinion either way. For years, I’ve bought Purple Flavor, because that was the kind my boyfriend preferred, and as we were BOTH using it and I had no strong preference, Purple it was!

But picking out my own mouthwash, for only me, I was stuck. Honestly! I couldn’t remember which one out of the two was my favored flavor. Green — or blue? Blue — or green? The names didn’t matter. I mean, do they even matter? It was a choice between Green “Fresh Mint” and Blue “Minty Fresh,” how in the hell is a consumer supposed to make a decision based on that?

So I’m stuck in the mouthwash aisle of the drug store trying to figure out which one to buy, and I honestly cannot choose for myself. I’M A SHEEPLE!!!

If they had Purple Flavor, I might have just bought that. Safety in what you know, right? But all they had was Green or Blue, and I had No Strong Opinion Either Way.

Defensively, I tried to conjure up a mental list of things that I do have strong opinions about. Meat is icky! I haven’t eaten meat since the last millennium, by choice. And if a Beatles cover comes on, I change the station. I love the Beatles, and I will not listen to an *inferior artist* attempt their work. I LOVE MODERN ART. I could stare at a Jackson Pollock until I get dizzy. And I have!

SEEEEE???? I have opinions! I have thoughts of my own! I’m not a SHEEPLE!

I just… have no opinions on mouthwash flavors. At all. None.

This wasn’t helping very much.

Maybe if I could have asked somebody else. You may say I am too easily swayed by others’ opinions, well, aren’t we all, to a degree? Haven’t we read online reviews of products to help us decide what to buy? Used Yelp’s star rating to pick between two sushi restaurants? Even if we haven’t literally held up dresses on the hanger in front of ourselves and asked “which one, the Green or the Blue?” chances are we’ve wanted to know what other people think.

I am reminded of the time I brought popcorn from Garrett’s to a party because it was on the list of Oprah’s Favorite Things.

I’ll give it to Oprah, that was damn good popcorn.

Choosing between caramel-coated and cheese-covered popcorns was different, however, than choosing between two things I really don’t have strong opinions about. But isn’t it good, sometimes, to not have strong opinions about everything? I consider it a strength that I can say, “Go ahead, YOU pick the music!” on car trips. As long as it’s not Beatles covers (ugh never), I’m perfectly happy to listen to something new. When it comes to trying new things, I’m mostly open, because I haven’t formed a strong opinion on them without experiencing them first. When I say, “What would you like to do?” it’s not because I can’t think of anything to do — I can — I’m being kind. I’m handing the keys over to you, letting you decide. That is a gift. I’m not indecisive, I just don’t have a strong opinion.

But tell that to the girl standing in front of the mouthwash, breaking into a light sweat under her coat. Green, or blue? Blue, or green? I’ve already forgotten which one I ended up choosing, just like I may have forgotten which one I preferred long before someone else’s preferences became more important to me than my own. Maybe I’ll try them both, and decide. Maybe it will never matter to me. Maybe I’ll like them both equally. If being too easygoing is a weakness, then go ahead. Call it a weakness. I’ll go along with you.

I am a follower, after all.

image of mouthwash via Wikimedia Commons