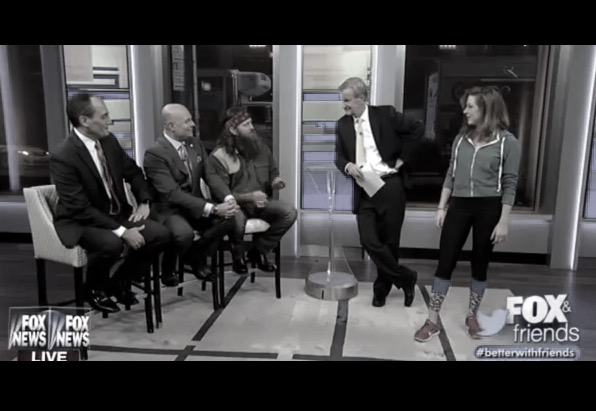 Loathe as I am to even grant this video more views than it already has, I watched it yesterday through my fingers, with all the lights on, covering my mouth in advance of the vomit I felt rising in my throat.  It’s less than six minutes long, but it’s the scariest horror movie you’re going to see this Halloween season, I guarantee it:

FOX NEWS BREAKING STORY!  Husbands, Fathers, Misogynists of every age and size!  YOUR WOMEN could be walking around out there wearing LEGGINGS, causing MEN to OBJECTIFY them as SEXUAL OBJECTS!  To show you the horror of this, we’ve assembled a jury of men from all walks of life who have tested negative for any trace of the concept of “irony” to objectify a woman who could easily be your wife, your daughter, your indentured servant (still have those right?) to stare at her butt on television and give her a rating on it.

Okay, I admit, this video cuts a little close to home, because I have my own VERY STRONG feelings about leggings.  I don’t find them comfortable, but I’m not running around New York throwing buckets of fake blood on women wearing leggings in public.  My breakdown on the matter is basically this:

B) it isn’t your
business or anyone else’s to tell people they can’t wear leggings as
pants, shorts as pants, dresses as pants, or shirts as pants if they
want to, because you are not that person. You are a separate human
being from them, and they are not you,
and you are not them, and even if they are medically conjoined to them,
you cannot tell them how to dress.

Every word of this video is such garbage misogyny and sexual
objectification and if this is what Fox News does, tell women what they
can wear, Fox News is even more of a sick joke and threat to society
than we ever imagined it was.  BRB, gotta go rinse the anger vomit
off my sweatpants. Are these acceptable pants for me to be throwing up
on while watching Fox News? I guess I need a man to tell me, huh?  What do you think.  Is it okay to tell people what to wear?  Where is the line?  Were you able to watch the whole video without barfing on yourself?  Did you watch it wearing leggings?  Is it ever acceptable for a woman to dress herself?  Help.  Please.