As I shared last week on Femnasty, it’s my 2-year anniversary of taking my stalker to the cops and getting an Order Of Protection.  I shared about the situation and what happened a year ago, but I’m not done.

See, the problem is, stalking like what happened to me is taught in all kinds of stories as being “romantic” and the way to “win a girl’s heart.”  I’m looking at you, Ted from How I Met Your Mother!  I don’t think I need to tell you that that is some dangerous, problematic bullshit.  Now imagine what our RomComs, SitComs and yes, ever fairy tales would look like if we taught girls that the choice is theirs, and taught boys to respect a woman’s right to say “no?” 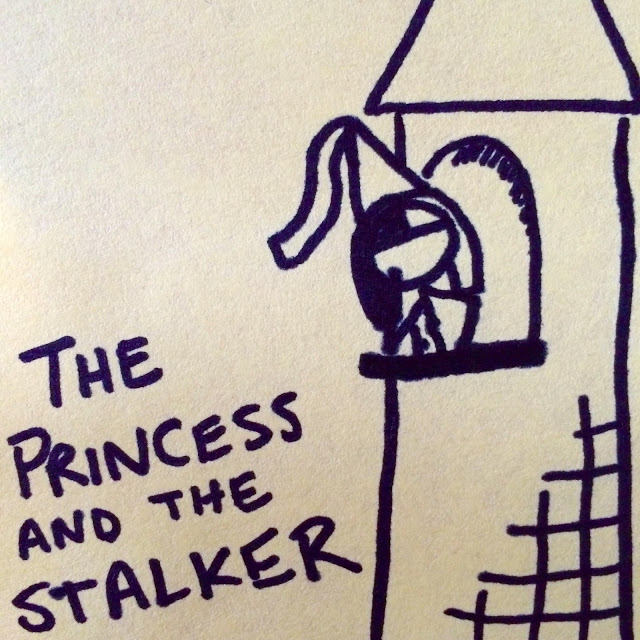 THE PRINCESS AND THE STALKER

Once upon a time there was a beautiful princess who lived in a tower.
Well, not beautiful in your traditional “Disney Princess” kind of way,
but definitely beautiful on the inside.  She had a great personality, is
what I’m trying to say.

One day, a prince was riding by the tower on his horse when he chanced
to see the tower and the princess inside.  He was instantly struck by
her beauty – or rather, her great personality.  Well, maybe “great” is
pushing it, but she definitely had A personality, and he fell in
love with her on the spot.

“Oh beautiful princess!” He called up.  The princess looked up from her
birds, who she was feeding bread crumbs to.  It was about 2:45 pm on a
Saturday, and this was Bird Brunch.  The princess was displeased to have
her bird brunch interrupted.  No one busts up bird brunch, Bitch.

“Oh beautiful princess!” He repeated, just in case maybe she didn’t hear
him the first time? “I am in love with you!  I am a prince!  Marry me
and be my queen and we shall live happily ever after!”

The princess looked up from her Twitter-bird friends.

“Sorry, was that last one a ‘yeah’ or a ‘no’?” the prince sputtereded.

“Are you sure?” The prince squeaked in his most convincing tone.

“Yep, I’m sure,” the Princess nodded and her bird friends nodded in agreement.   The Princess makes her own rules.

“Are you serious?  Just because you’re a prince and I’m a princess doesn’t mean I have to marry you just because you asked me!  Now if you don’t mind, Royal Highness, I WAS HAVING BRUNCH.”  The Princess tugged closed the curtains of her tower, shutting the whiny entitled prince DOWN.

“Doubtful,” the Princess muttered into her Bloody Mary.  But the prince
was already gone, sped off on his steed to concoct a romantic scheme to
win the princess’s hand.

The Princess didn’t hear from the Prince for a long time, so she assumed
he’d lost interest and given up.  But she had assumed wrong!

One day, out of the blue, the prince came riding up.  He hopped down from his steed and shouted up to the Princess:  “Greetings, my fair maiden!”

The Princess squinted down from her tower.  “Excuse me?”

The Princess wasn’t sure she remembered this guy, I mean, there’s princes all over the place in Fairy Tale Land.  That tower was pretty high up, dude.  Also, maybe he was wearing a hat last time?  The Princess didn’t want to be rude, so she decided to be vague.

“I have returned as promised to win your heart!”  The Prince unloaded a sack off the back of his horse.

“Oh, it’s you,” the Princess started to turn away back into her tower.

“I have a gift for you, my fair Princess!”  the prince produced a scroll from his satchel.  “I have written you…a text!”

“Well, okay, then,” the prince rifled through his bag.  “I thought you might say that.  So I wrote you another text.”

“Well, good for you, but I don’t want any of your texts.”

“Right.  And I thought you might say that…”  the prince dumped his bag onto the ground in front of the Princess’s tower.  45 more scrolls fell out.  “Which is why I wrote you 47 texts!  Now will you be my queen?”

“Nope,”  the Princess drew the curtains on her tower window.

“You’re just going to ignore all my texts?!?”  the prince squeaked.

“That’s right,” the Princess shouted from behind the curtain.

“Well, FINE! But I won’t give up!”  the prince leapt onto his steed and sped away.  And he didn’t come back for a very long time.

Such a long time, in fact, that the Princess thought maybe he met somebody else.  “Good for him,” she thought.  The Princess continued messaging Princes on OkCupid, and blogging about her adventures from her tall tower.

And then ONE DAY, the prince rode up on his horse.  Only this time, he was pulling a wagon behind him.

“Salutations, my fair princess!”  the prince shouted up.  The Princess opened her curtain.

“My lady, I have brought a minstrel in yon wagon!” the prince gestured to a short, nervous man peeping out from under a floppy oversized hat, clutching a lute.  “His voice will carry my message of love to your tower, and your heart will be mine!”

“You’ll change your mind once you hear his voice and my message!” the prince taunted.

“Okay!  Get ready to hear my voice message!” the prince gestured towards the minstrel, who nervously adjusted his lute and began to strum.

“NO!  Now, STOP IT!” the Princess whipped her curtains open.  “Stop the music, stop the harassment, stop coming by my tower!”

“Well, how do you know you don’t want to get to know me?  You won’t accept my texts, you ignore my voice messages, what should I do?”

“What’s the matter with you!?” he prince yelled.  The minstrel pulled his hat over his eyes and began trembling. “I’m a prince!  You’re a princess!  Do you think you’re too good for me? I know you!  You think you’re so special?!”

The prince swung up onto his horse and broke into a gallop, jostling the poor, whimpering minstrel in the wagon behind as he yelled:  “I’ll be back, and you’ll be sorry!”

And then a lot of time passed, and the Princess went on with her life.  Most days she forgot about the prince and his harassment, but every now and then she worried he might actually come back one day.  Then even more time passed, and she went about her business, brunching with her bird-friends, when all out of the blue…

“Good afternoon!”  A familiar voice called up the Princess’s tower.  The Princess and her bird squad were having a lovely brunch of bird crumbs and Bellinis, and when the prince appeared, the birds started tweeting amongst themselves.

“What are you doing here?” the princess called down, calmly.

“I have brought my lady some flowers!” the prince raised a small bouquet up in the air, reaching as high as he could from the back of his horse.  “Send down one of yon bird friends to bring them up to thee in thy tower!”

“Actually,” the Princess set her glass down calmly.  “I have something I need to give to you.”  She rolled up a scroll and passed it to her bird friend to hold in his beak and carry down to the prince on back of his steed.

“What’s this?”  the prince unfurled the scroll and began reading.

“It’s a restraining order,” the Princess finally smiled.  “You’re not to come within 500 yards of me OR my tower.  Furthermore, you must attend mandatory counseling in the next kingdom over and complete a sexual harassment training course ‘Controlling The Fire-Breathing Dragon Within.’  It’s all there on the paper.”

The Princess tipped her drink to her lips to hide the gloating grin growing over her face.  But it wouldn’t have mattered:  the prince was still staring at the paper, dumbstruck.  He sat there silently for a long, long time.  Finally, his horse gave a snort – maybe it was his horsey way of apologizing to the Princess?  Or maybe he was just filling the silence because he was embarrassed to be seen with such a moronic douche on his back.  He trotted away very slowly, as the prince was still clutching the restraining order in both hands.

The Princess never saw or heard from the annoying, clueless prince again.  She continued to blog and message other princes on OkCupid and she only dated the people she liked and didn’t date the people she didn’t like and she lived happily ever after.  The End.