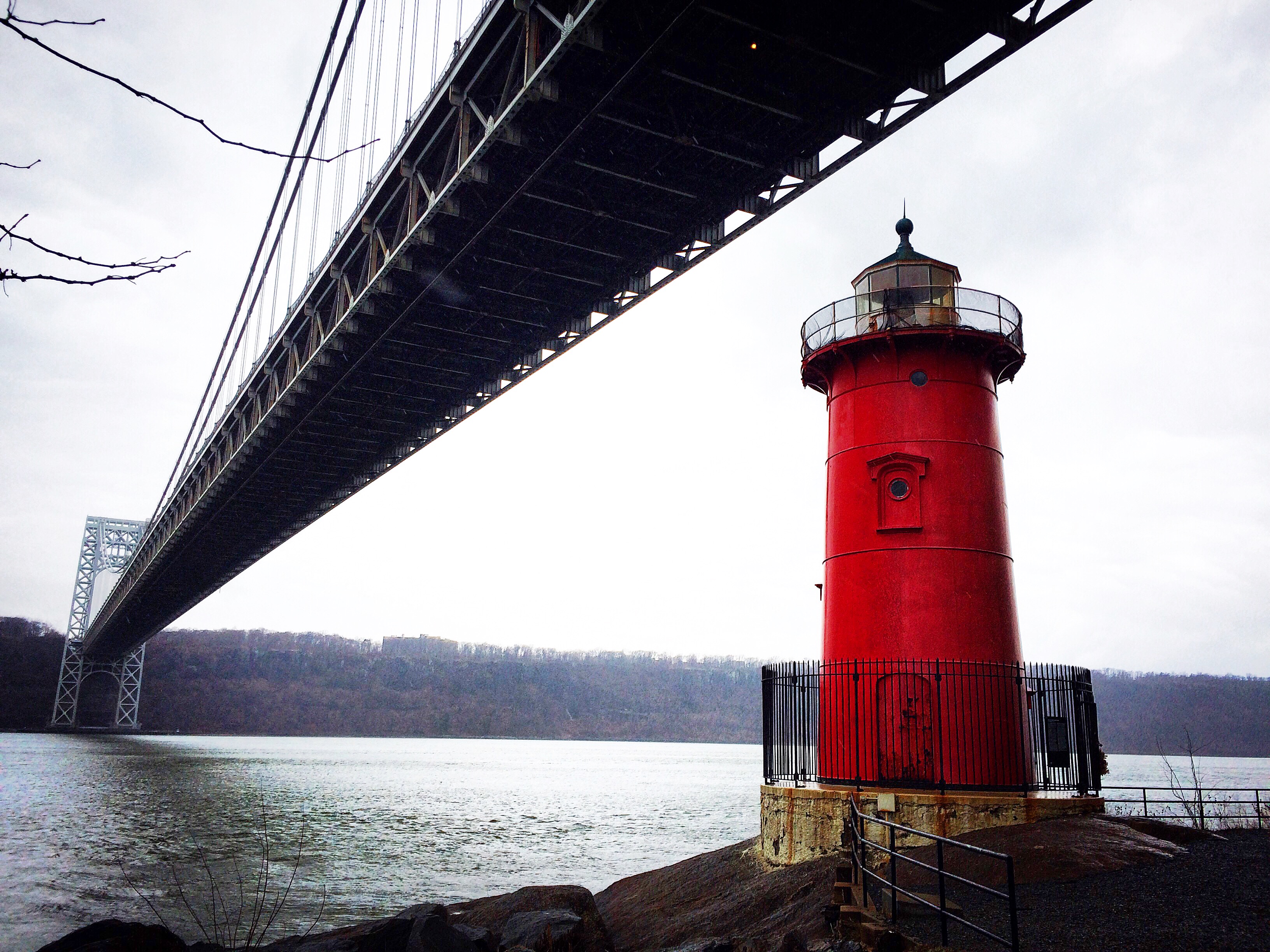 I’ve loved the Little Red Lighthouse for a long time. And I can PROVE it!

HERE! With this blog post from 2012! Now, don’t be confused about the purple Chuck Taylors — it’s a pure coincidence that I was rocking these Chucks in May ’12 and happen to have a very similar pair at present: 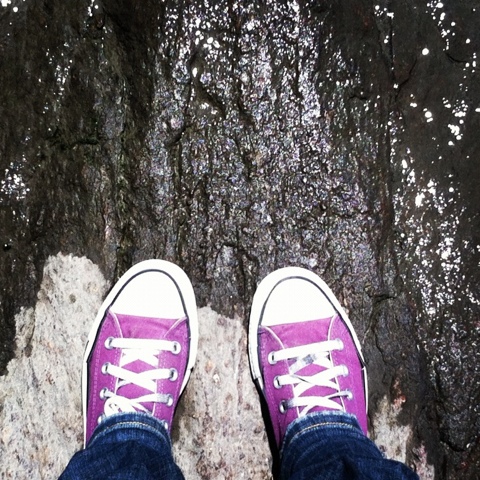 I mentioned that being close to the water makes me feel at home, and that’s probably because I used to overlook these very waters from my bedroom window. Or at least, I would for another three months and change after this post was written… and I never went back.

So imagine returning, almost 7 years later, to the place that was once basically your front yard! Okay, a little exaggeration, but I’m not kidding when I say my bedroom used to look out over the George Washington Bridge! 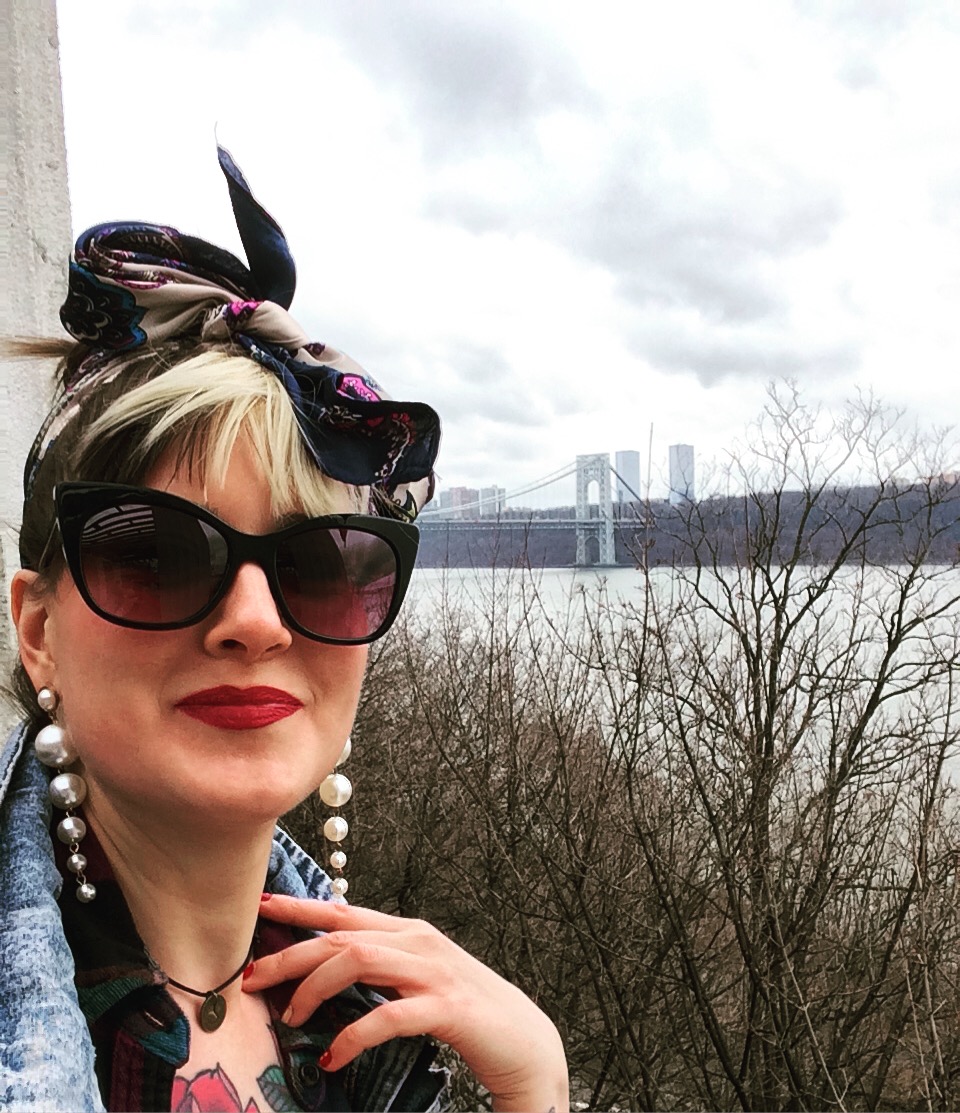 I will say this right now: the George Washington Bridge is my favorite bridge in the city. Controversial! There are so many excellent bridges in the New York City area, connecting our fair islands to New York state, New Jersey, and each other. Many of them designed by Othmar Ammann, the prolific Swiss-American bridgemaker who, as it just so happens, cut his teeth on the George Washington Bridge! For many years, it was a dream of both New Yorkers and New Jersey-ans to have a bridge connecting each other across the Hudson River. Many potential plans were bandied about as possibilities, but Ammann’s plan was the one that took the ticket: connecting Manhattan at its highest elevation to New Jersey’s rocky cliff-face, The Palisades.

Fun fact! The bridge, which was opened in October 1931, is technically not complete!!! In its original design, the steel structure which we today know as the George Washington Bridge was intended to be clad in ornate sculptures designed by Cass Gilbert, aka, the architect and designer of the Woolworth Building downtown (coincidentally, my favorite skyscraper)! However, it was 1931. 1931!! Two years into the Great Depression?? There was just no more monies to make the bridge any more decorative than it needed to be. And the cool thing was? Actually, the design was widely praised! Yeah, people loved the bare-bones “unfinished” skeleton of the bridge, praising its elegant modernity! Except, notably, Othmar Ammann, who bemoaned the fact that his bridge …wasn’t done yet. Bully for him, though, people liked the style, and he went on to build 5 more bridges within New York City, including the *eerily similar* Verrazzano-Narrows Bridge to connect Staten Island with Brooklyn.

Another fun fact! Those thick, naked cables that give the bridge its familiar silhouette are comprised wire from the John A. Roebling Company. ROOOOOEBLING. John A. Roebling, of course, was the civil engineer who designed another very famous NYC bridge, say it with me, the BROOKLYN BRIDGE!!! Tragically, he died before the bridge was completed and it was, at the time, the longest suspension bridge in the world. It was a deliberate act of honoring Roebling’s legacy and his ties to New York that cemented the decision to use the Roebling Company to supply the wires — originally, Ammann had other ideas for the design, but sentimental favor won out. I mean, build a bridge in NYC without giving a nod to Roebling? It just isn’t done! And Ammann’s GW Bridge, just like Roebling’s Brooklyn Bridge, would at the time of its opening, hold the record for being the longest suspension bridge in the world. Ammann would, of course, beat his own record at the end of his career, with the Verrazzano-Narrows Bridge. But there’s something spectacular and intrepid about the stories of the Brooklyn Bridge and the George Washington Bridge. Sparkling similarities link them, both deliberate and coincidental: following John A. Roebling’s tragic death during the construction of the Brooklyn Bridge, one of Roebling’s sons and his wife Emily took over seeing through the rest of the bridge project to completion. That son’s name? WASHINGTON Roebling. Dun dun DUNNNNN!!!!! 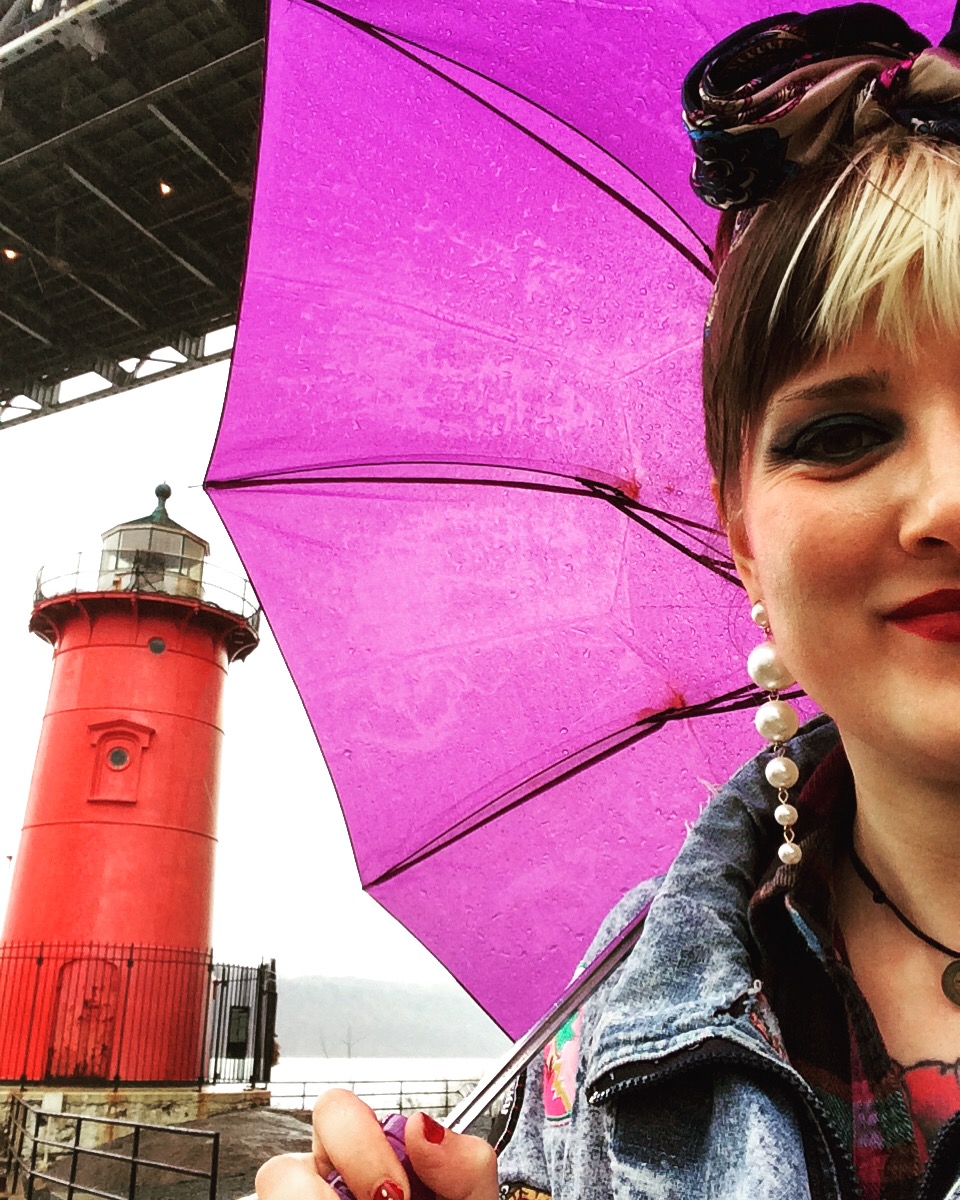 The Little Red Lighthouse was actually there before the bridge, and ooooh, this story is every bit as juicy as the story of the Great Gray Bridge above it. See what I did there? Well, you will.

The lighthouse protects an area of Manhattan known as Jeffrey’s Hook, a spot where the coastline juts out unexpectedly into the Hudson River, hazardous to ships. Little Red Lighthouse to the rescue! LRL was born in 1880 in Sandy Hook, NJ, but it became obsolete there in 1917 — sadface! In 1921, LRL joined the United States Coast Guard and moved to Washington Heights (90 years before I did, as it just so happens).

Ten years later — ya following me? — there suddenly appeared a giant suspension bridge right over the Little Red Lighthouse’s head. And maybe it just happened to be the longest suspension bridge in the world, to boot. As children’s book author Hildegarde Swift observed in her 1942 novel, being dwarfed by such a massive bridge which effectively rendered the lighthouse obsolete once again really, really hurt the Little Red Lighthouse’s feelings. The Little Red Lighthouse was “discharged” from the Coast Guard and slated for destruction in 1948! EEK! It was Swift’s beloved book, The Little Red Lighthouse and the Great Gray Bridge, that moved the community to petition the city to leave the lighthouse alone! And the flood of letters from children and adults alike warmed the heart — would you believe it — New York City’s least sentimental Parks Commissioner himself, ROBERT MOSES! With a stroke of a pen on a deed, the Coast Guard sent the Little Red Lighthouse into retirement with the New York City Department of Parks and Recreation in 1951. Not a bad deal for a 71-year-old “veteran” and hero of a classic children’s book!

Jeffrey’s Hook is the very spot where I first dipped my toes, literally, into the Hudson River. In a way, baptizing myself a Manhattanite. Way up top, there’s a picture of it — I left my purple Chucks on, please, I’m not trying to get Hep C from the polluted Hudson! All I’ve ever wanted was my own West Side Story, ever since I saw the musical on TV while sick with the stomach flu. Moving to Manhattan in 2011 was the definitive moment of making it. I was Natalie Wood, I was Carrie Bradshaw, I was That Girl! Shortly after this victorious moment, I nearly lost it all. In July 2012, I nearly had to leave my Manhattan dream, give up on my life. It’s nothing short of a miracle that I made it back here — albeit from another borough, rather than a short walk from my front door! 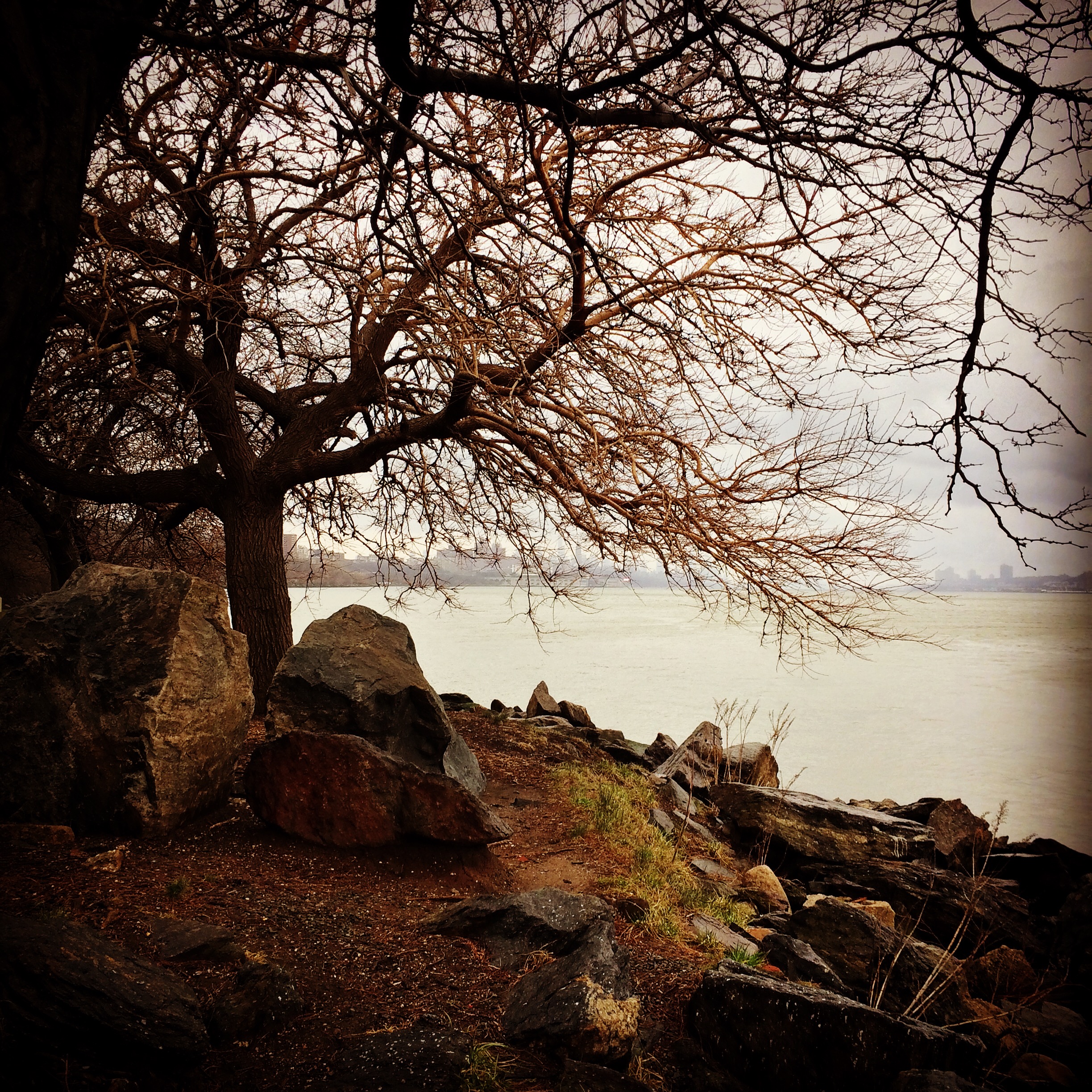