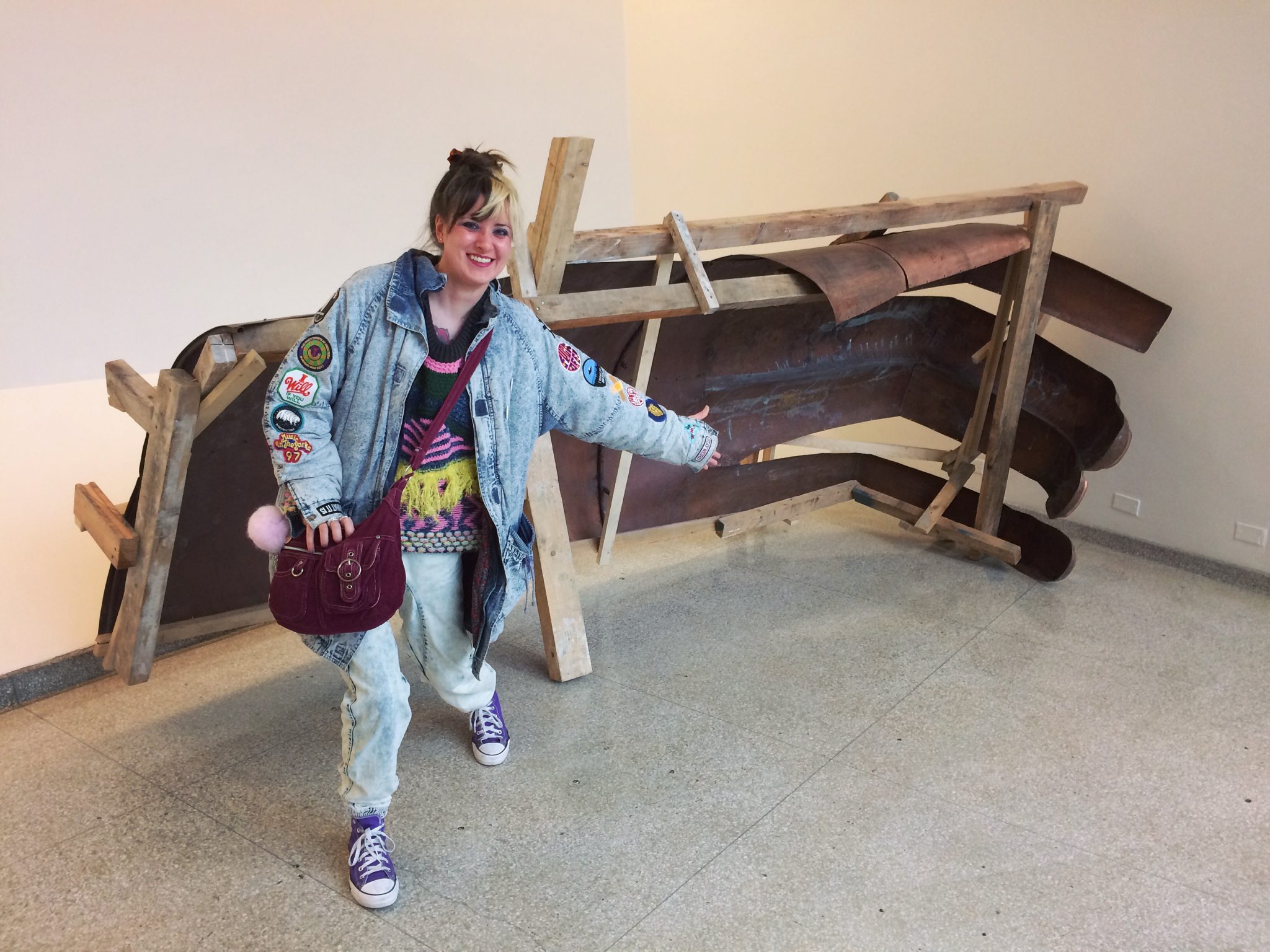 COOL STORY BRO: Four years ago, during my second season giving ghost tours in Lower Manhattan, City Hall Park was overtaken by an installation by Dahn (pronounced “Yon,” I googled it) Vo, called “We The People.” Click the link! Did you click it? So basically, it was life-sized CHUNKS of the Statue of Liberty, scattered throughout the park. And every time we walked through the park for the tour (have you taken my tour yet? Seriously, Lower Manhattan is the best! Do it! DOOO ITT!), they would startle/scare people. Just big, swirly, lumpy copper chunks, hiding in the bushes. It was grand, incredible, impactful, and I loved pointing it out to people. Granted, I definitely mispronounced the artist’s name, like, every single week back then (eeek! ? sorry, Dahn!), but one of the highlights of that tour season was seeing that installation, and every year since, describing it after it had gone, and telling people how good it was. 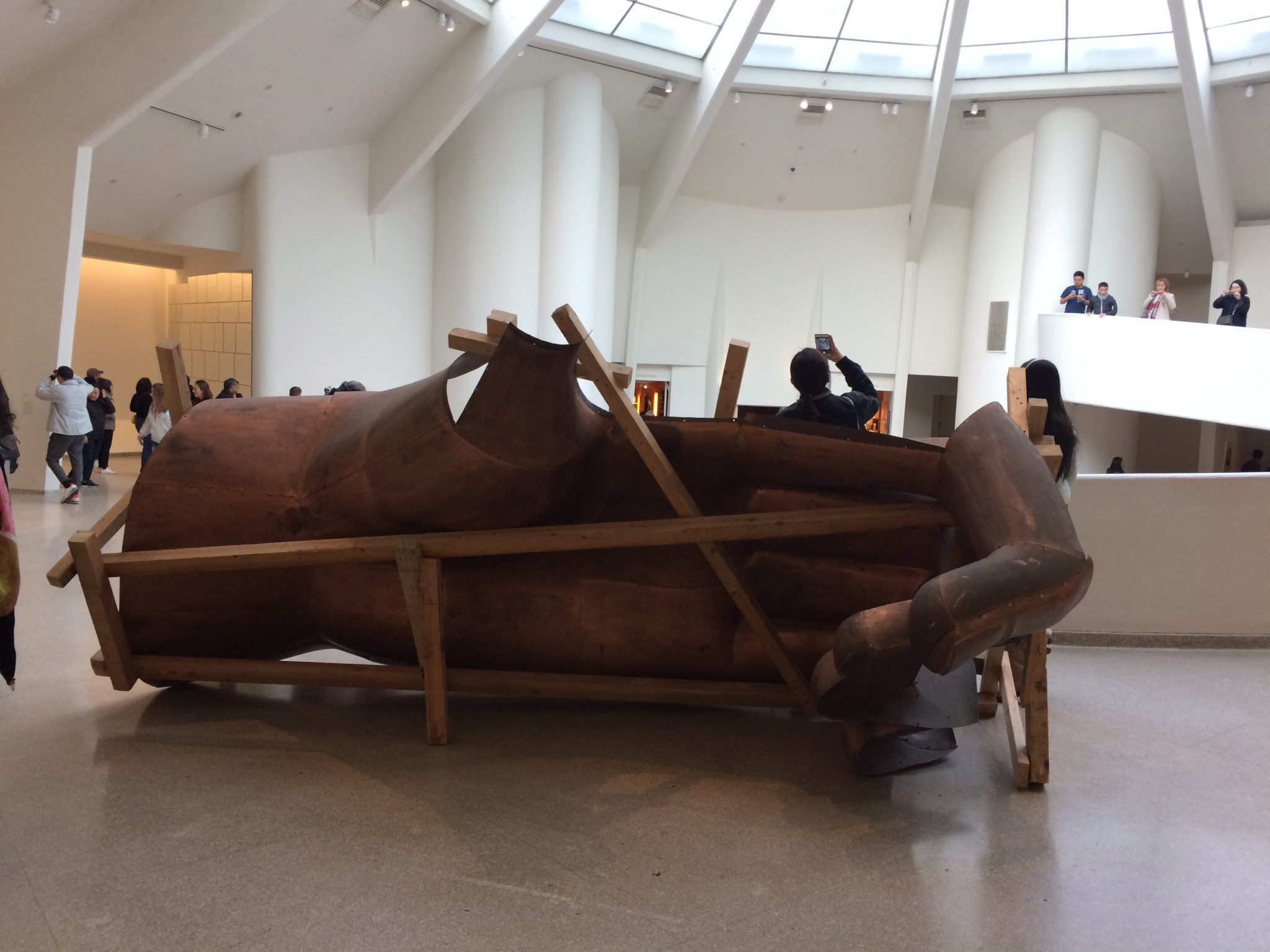 I could never have imagined I’d be fortunate enough to see it again, but when I saw posters in the subway informing me that Dahn Vo was having an exhibition at the Guggenheim – surprisingly, a museum that I’ve never been to – I didn’t make the connection between the giant brass hand in the picture and the installation that I’d loved so much, but it was one and the same! “We The People” came back into my life, and for that alone, this exhibition took my breath away! But wait, there’s more! Dahn Vo’s destructive tendencies and sentimentality are scattered across seven layers of that giant spiral on Fifth Avenue in such a way that had me squawking with laughter, clutching my heart, and at times, blinking back tears. 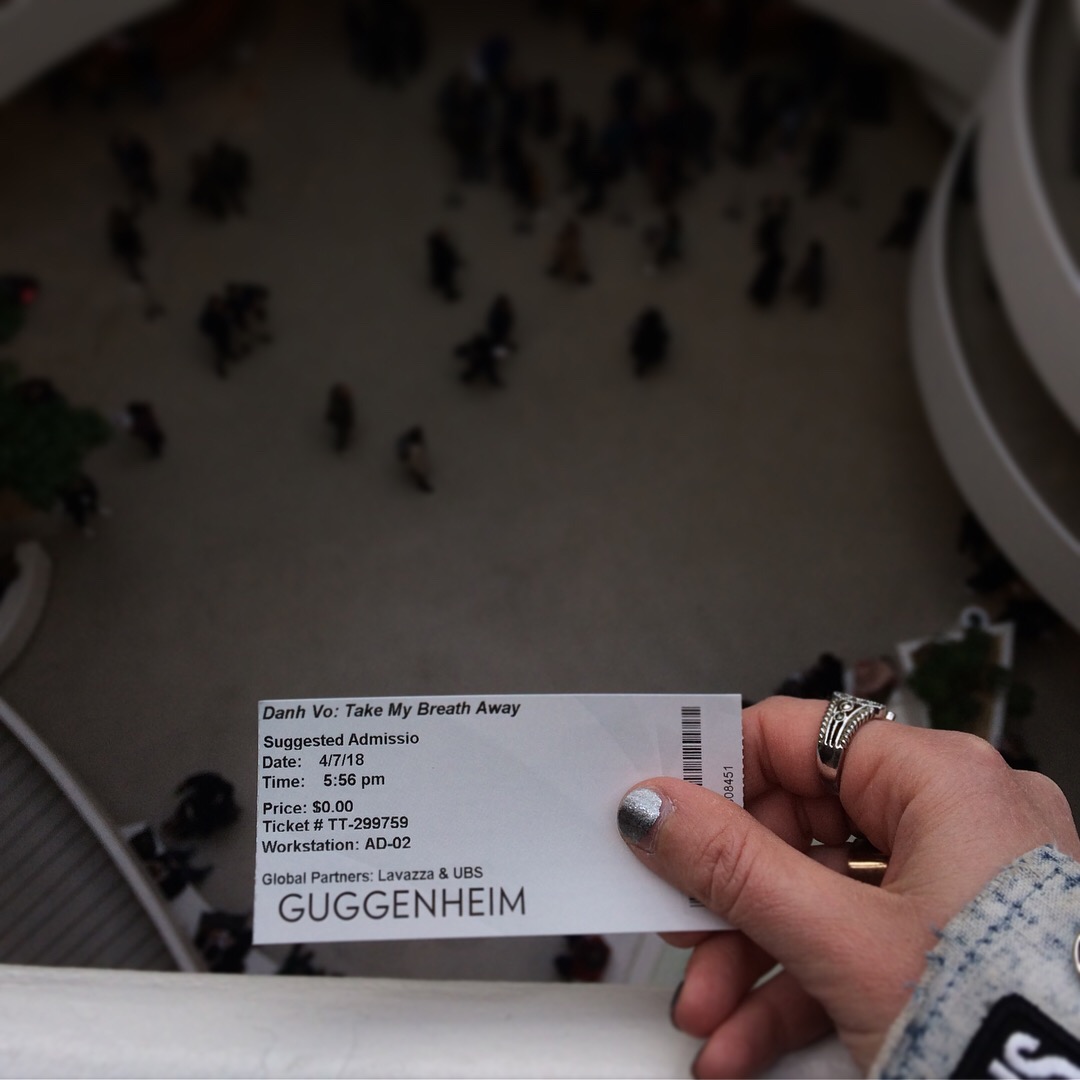 So here’s a great tip: on Saturday evenings, the ordinarily-prohibitively-expensive Guggenheim museum has “pay what you wish donation” hours. Hot Tip: line-up starts outside around 5:00, or at least it did this past Saturday. Be prepared to stand outside for like, an hour. Try to get a sick selfie outside the Guug while you’re at it. 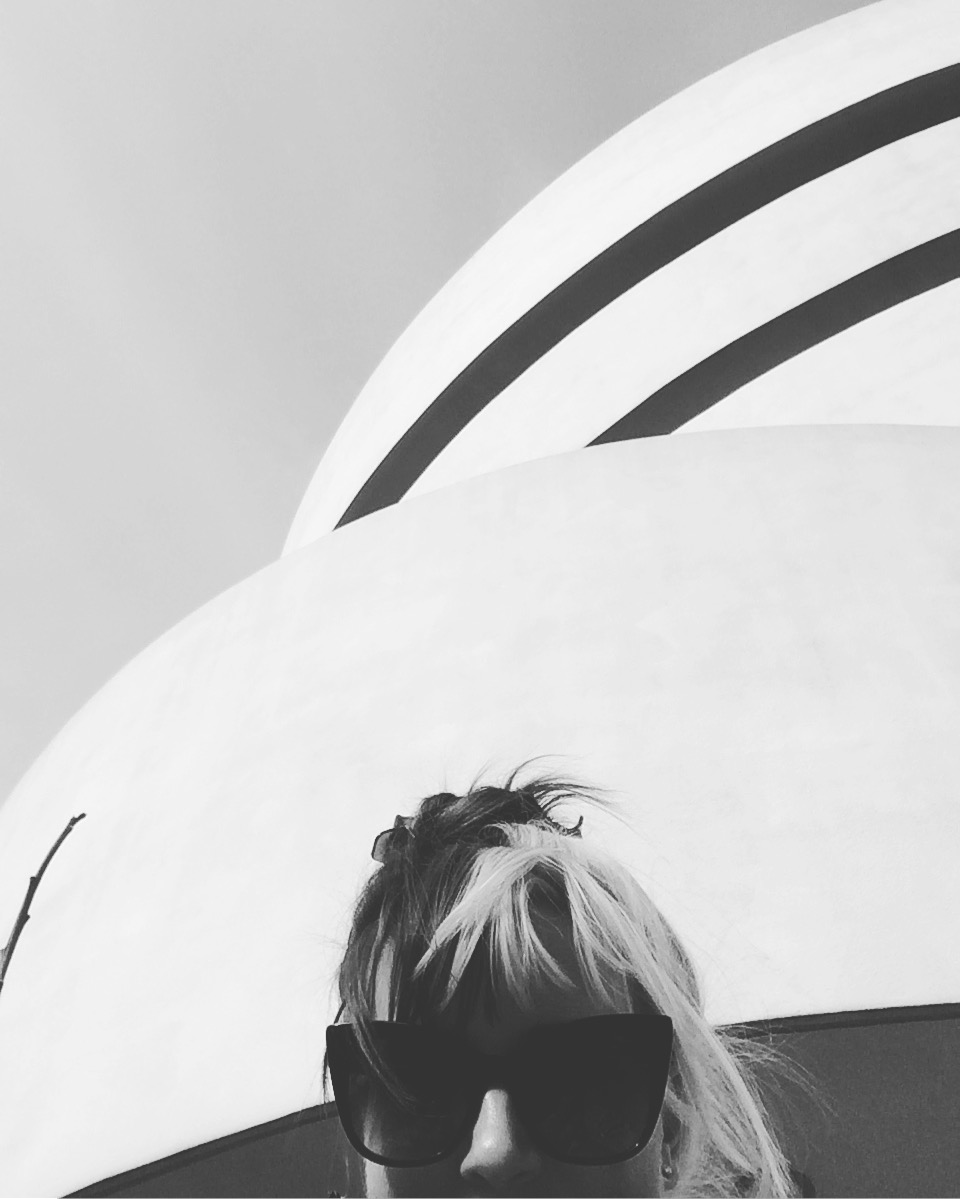 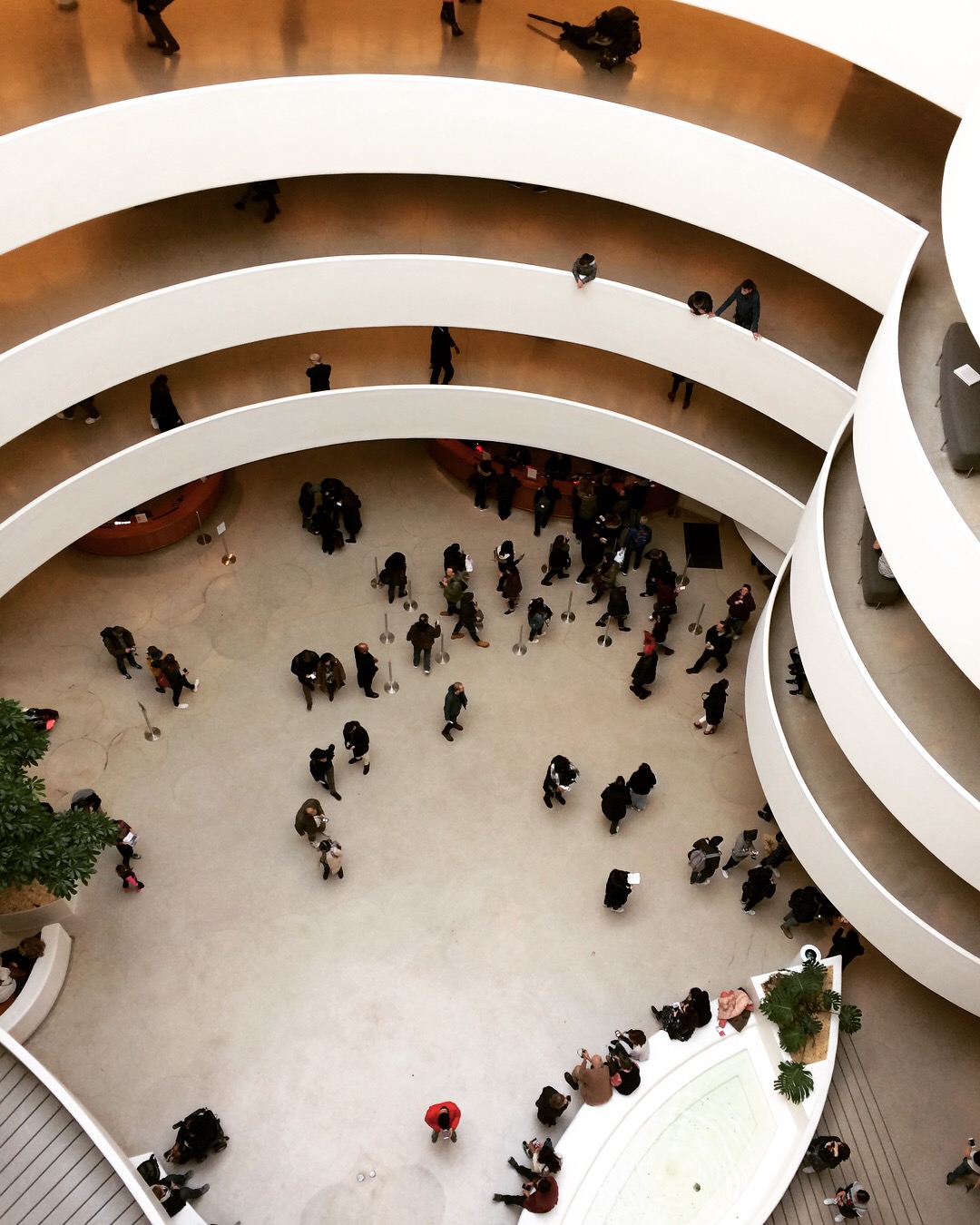 The Guggenheim Museum, or, as its mommy yells when it’s in trouble, the Solomon R. Guggenheim Museum (ha ha!), is a work of art itself! It was designed by Frank Lloyd Wright, who is a guy you probably know, from that Simon & Garfunkel song, you know? We decided to start on the top floor via the elevator, and spiral all the way down, which I think might have been the – not the wrong move – not the way the exhibit was intended to be viewed? Well, whatever. As you’re walking, the museum feels kind of like one continuous hallway, with a brief commercial break on the second floor to see some, y’know, typical museum stuff, like Picasso and Degas and Kandinsky, etc, blah blah blah, you know 😉

Back to Dahn Vo! 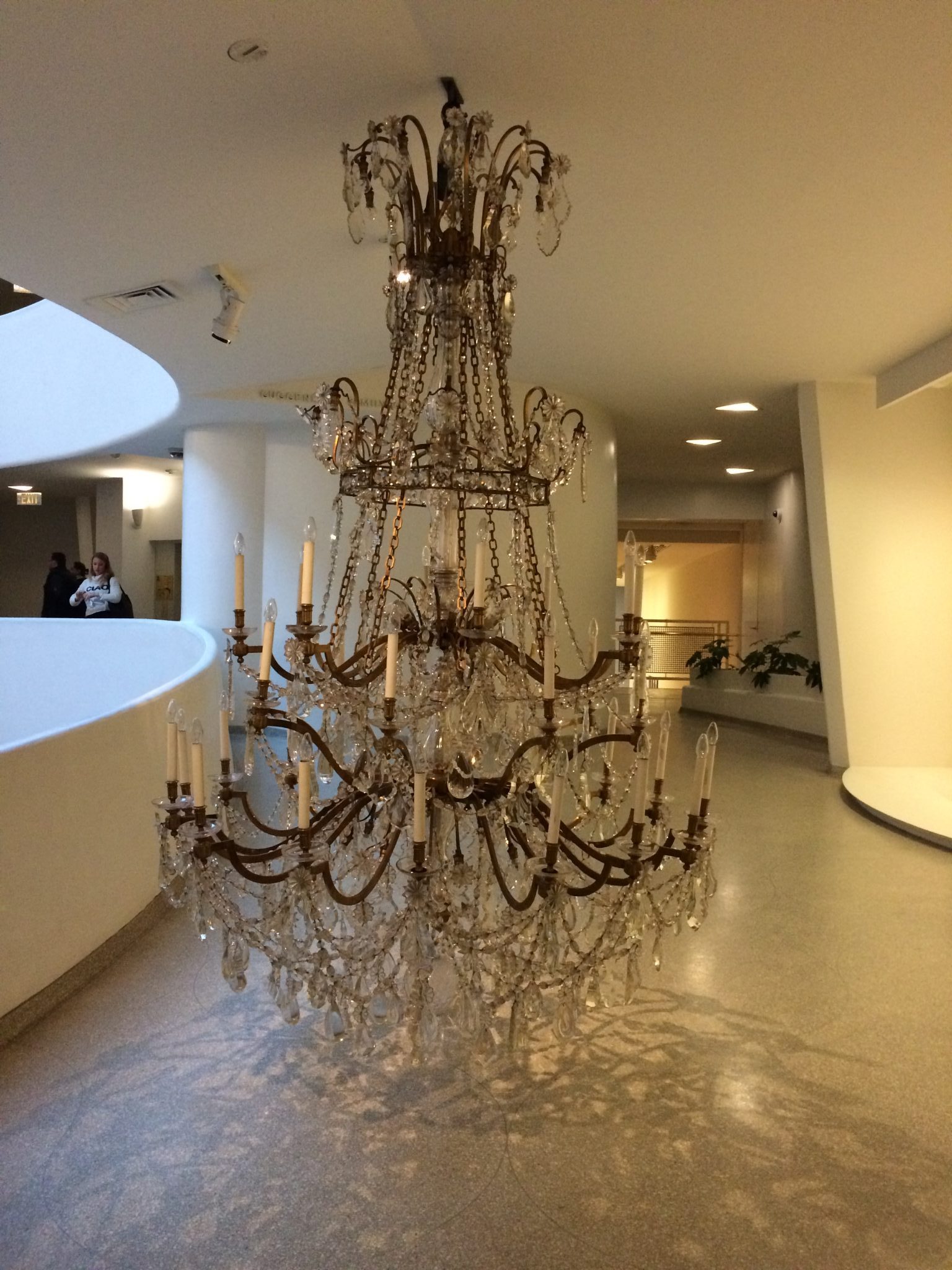 I don’t know if this was par for the Guggenheim course, BUT, rather than grouping “like items” together, thematically-linked pieces were scattered throughout the exhibit so that, as you stroll through and see new things, you’ll inevitably stumble upon things that smack of familiarity: “Oh, this again!” in a way that felt, to me, like I was walking around inside Vo’s brain. Or, what I like to imagine his brain is like. We see recurring objects, themes, pet obsession, and memories. Chiefly, surrounding the idea of taking things apart. The chandelier up here is one of three in the exhibit, and the only one displayed whole. The others are taken apart into pieces and laid out, as one plaque described, “with forensic detail,” all throughout the rest of the exhibit. 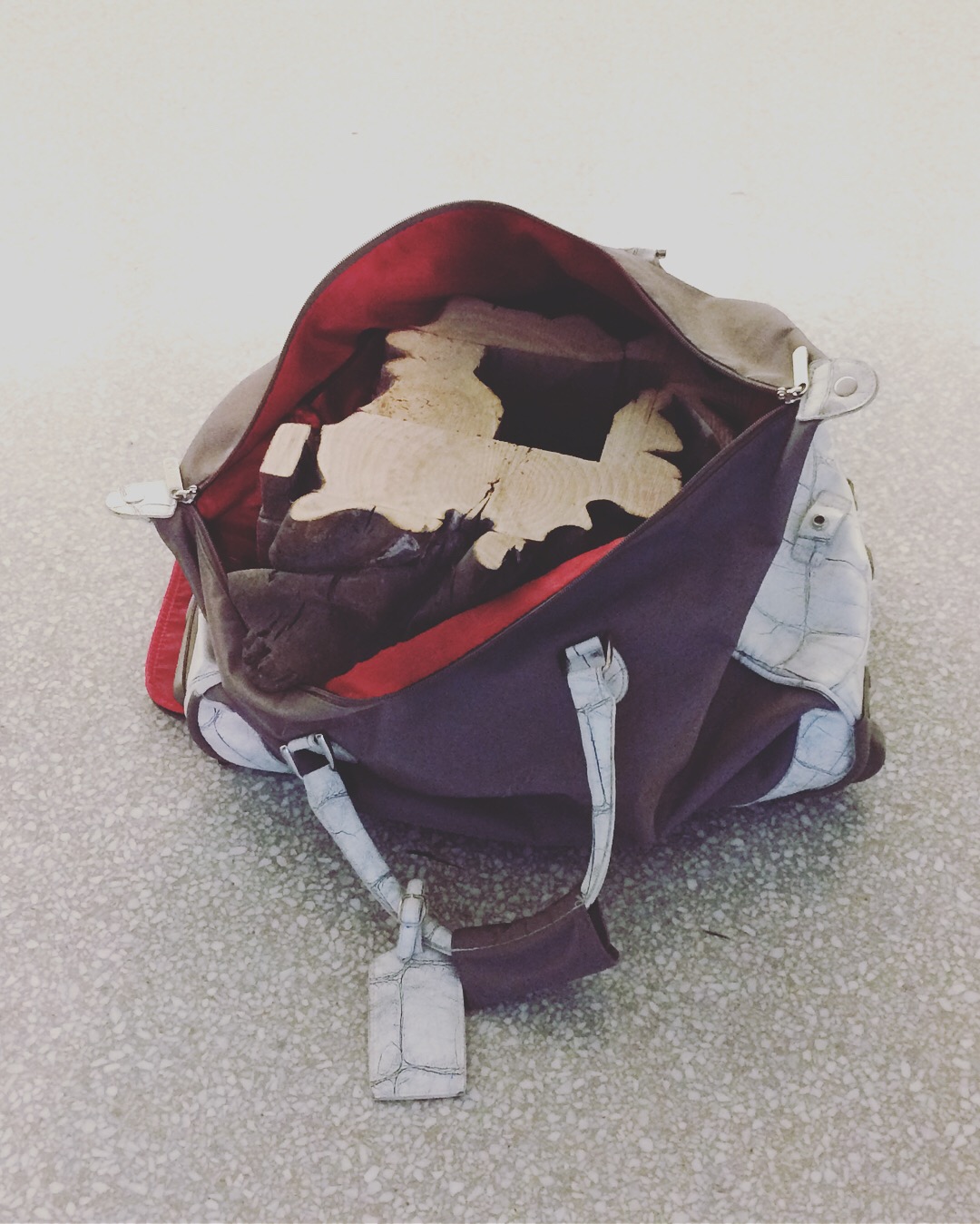 Vo really likes taking things apart – specifically, wooden religious statues. Here is a foot-area chunk of a statue of St. Joseph in a carry-on bag, purchased by Vo and then cut into six pieces to fit into carry-on bags that would fit within EasyJet’s requirements for carry-on luggage… I mean, what else is one to DO when purchasing a 16th Century religious statue? Those carry-on policies can be soooo restrictive. This is, supposedly, Vo’s first taste of hacking apart existing pieces and re-displaying them re-arranged. . . 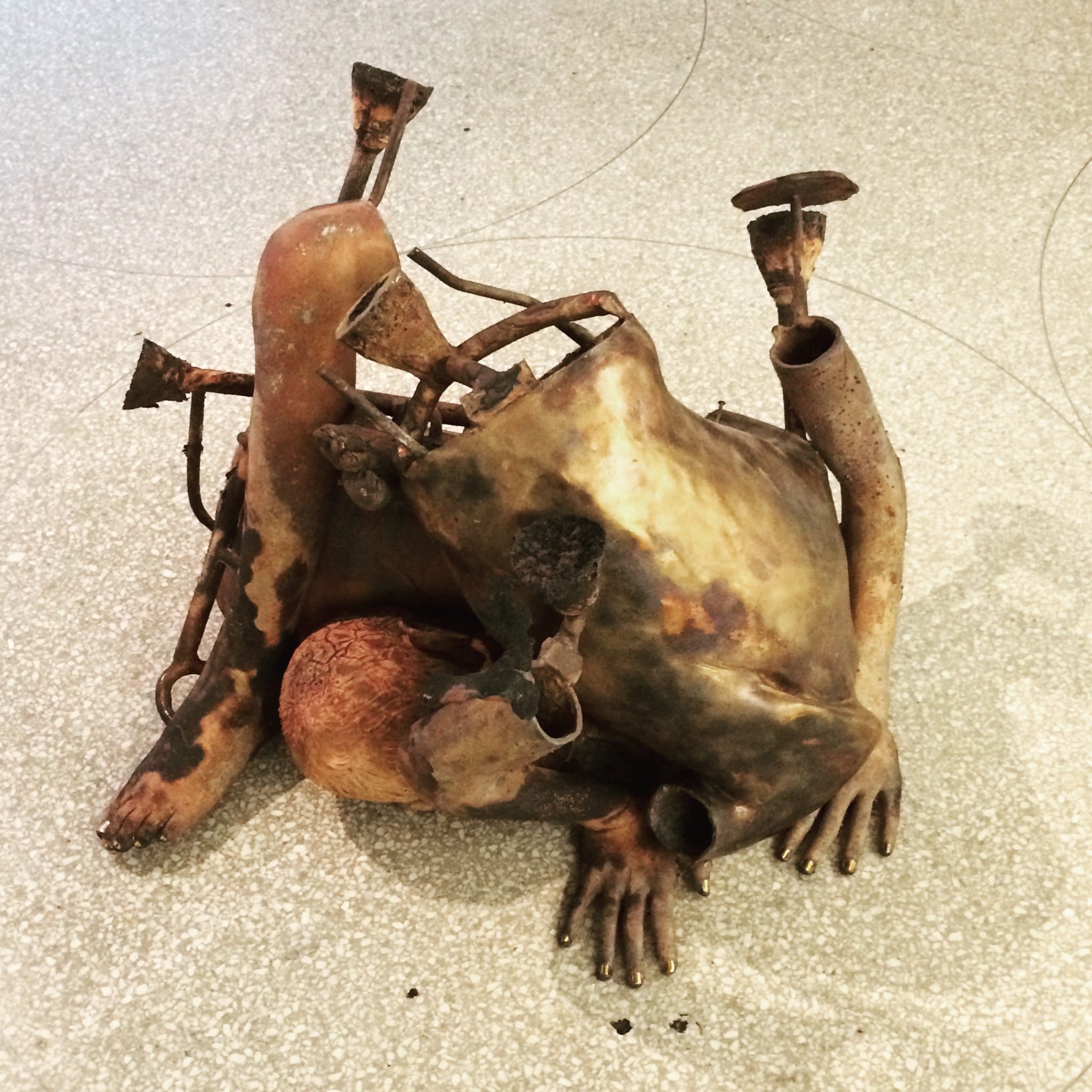 Apparently, he got a taste for it. 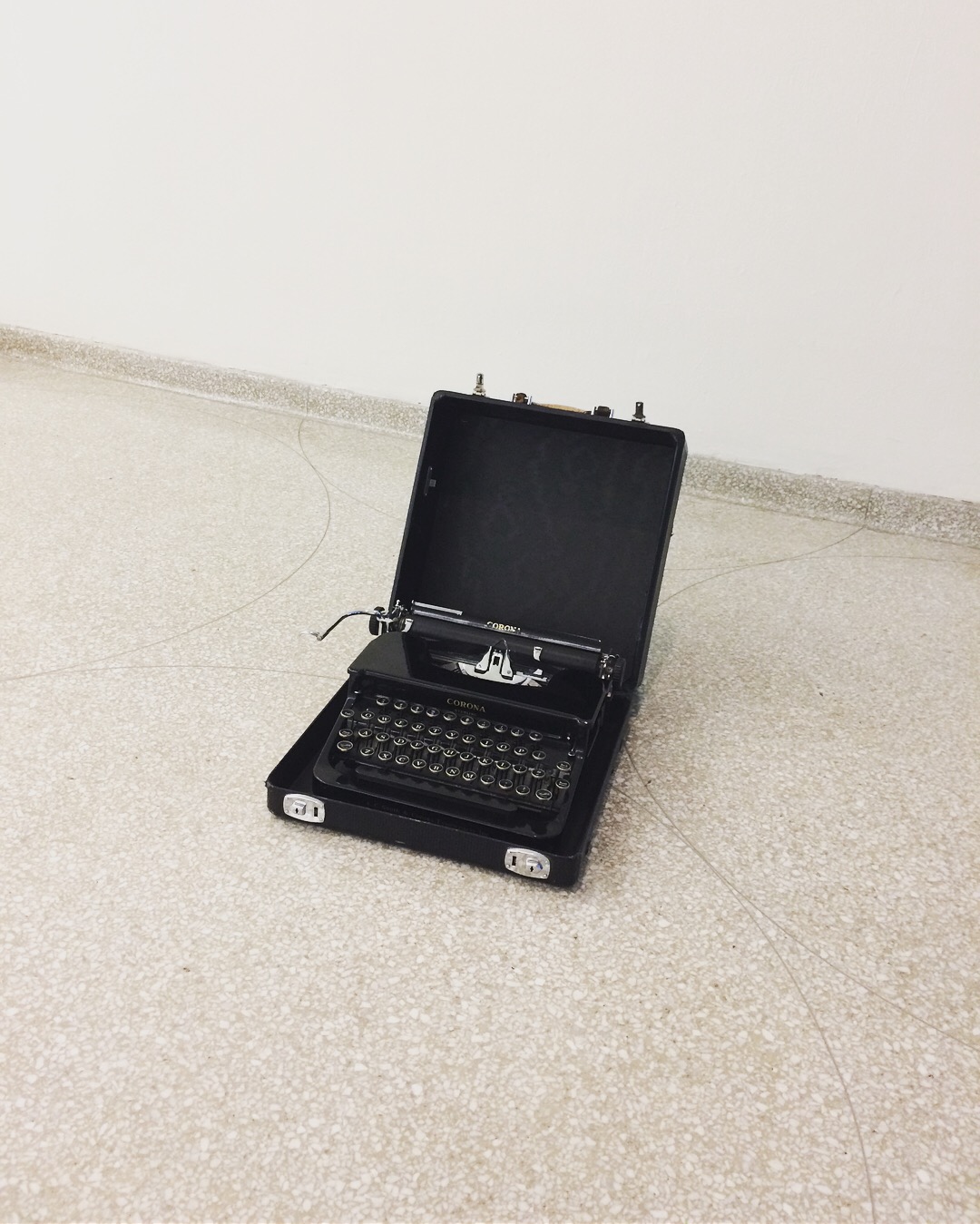 Another fun thing Vo likes to do, apparently, is acquire and display banal objects that once belonged to famous and influential people. He seems to have absolutely pillaged the estate auction of Robert McNamara (Secretary of Defense under John F. Kennedy). Early on in the exhibit (or late, if you work your way UP the spiral) is this seemingly innocent typewriter. Cute, right? Twee, huh? Well, apparently, this is the typewriter that belonged to THEODORE “THE UNABOMBER” KACZYNSKI, upon which he typed his 35,000 word manifesto which he blackmailed The New York Times into publishing in their paper. HOLY SHITBALLS, DAHN VO! 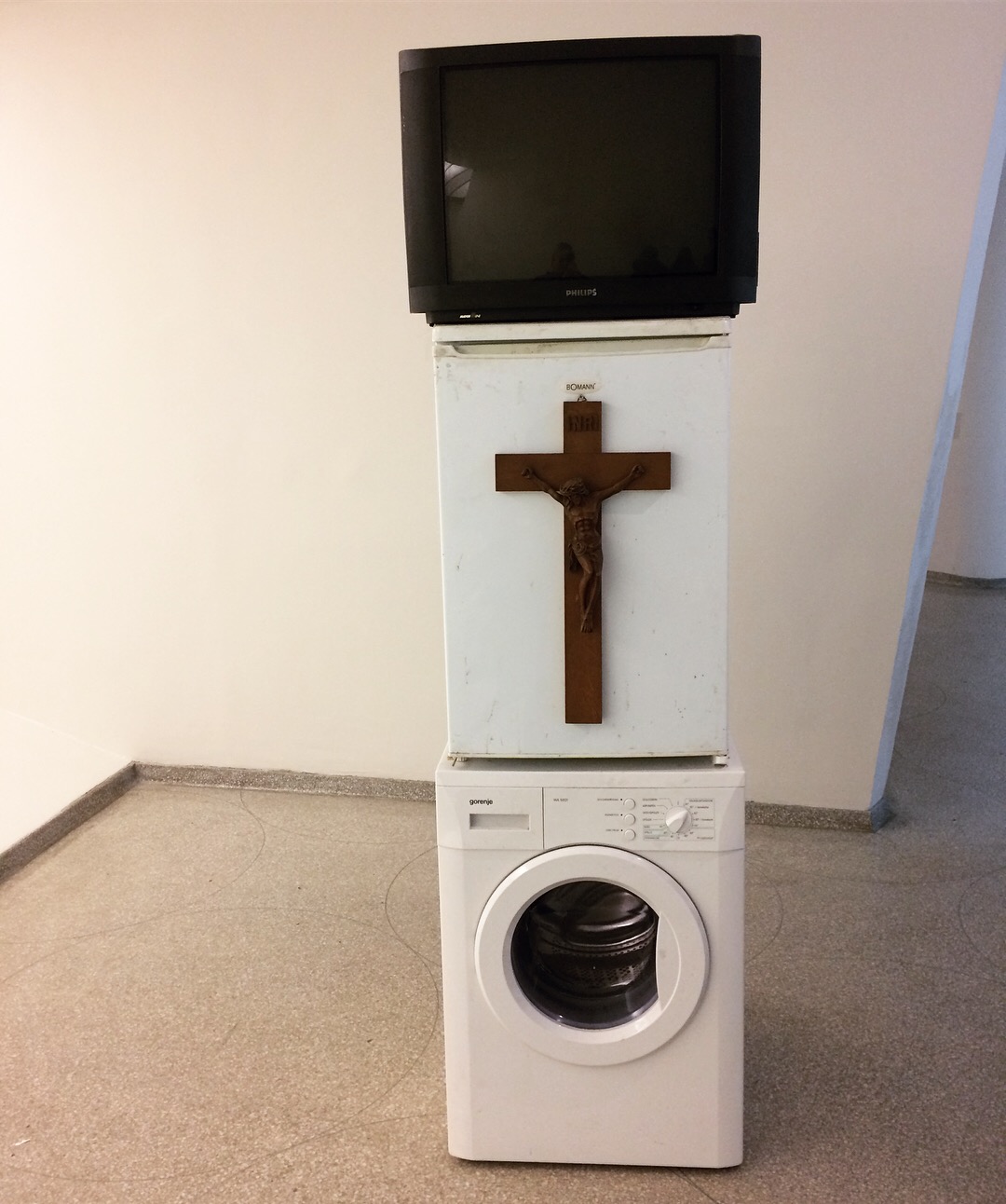 Now, here’s the part that really will, as the exhibition title promises, “Take [Your] Breath Away.” This is the part of the exhibit that feels the most risky, the most brave: Vo also displays objects that prompt memories from his own life, which is, in fact, extraordinary: he and his family fled Vietnam on a hand-made raft, and were picked up by a Dutch shipping vessel and brought to a refugee camp. Objects on display include a photograph of himself and siblings celebrating Christmas at this camp, as well as his father’s prized possessions (no spoilers), having left most of their belongings behind in Vietnam. The piece above is titled “Oma Totem,” and is a stack of three household appliances that were given to his paternal grandmother by social services upon arrival in Germany, being reunited with the rest of the family. The cross was a gift from a Catholic church. I can’t explain why this was so striking. There’s nothing really personal about any of them, except that they’re the actual object that she used every day. Her television, her refrigerator. You can imagine her touching them, every day. It’s impersonal and intimate, all at the same time? Then, directly behind it, tacked to the wall, is this chain with a set of keys: 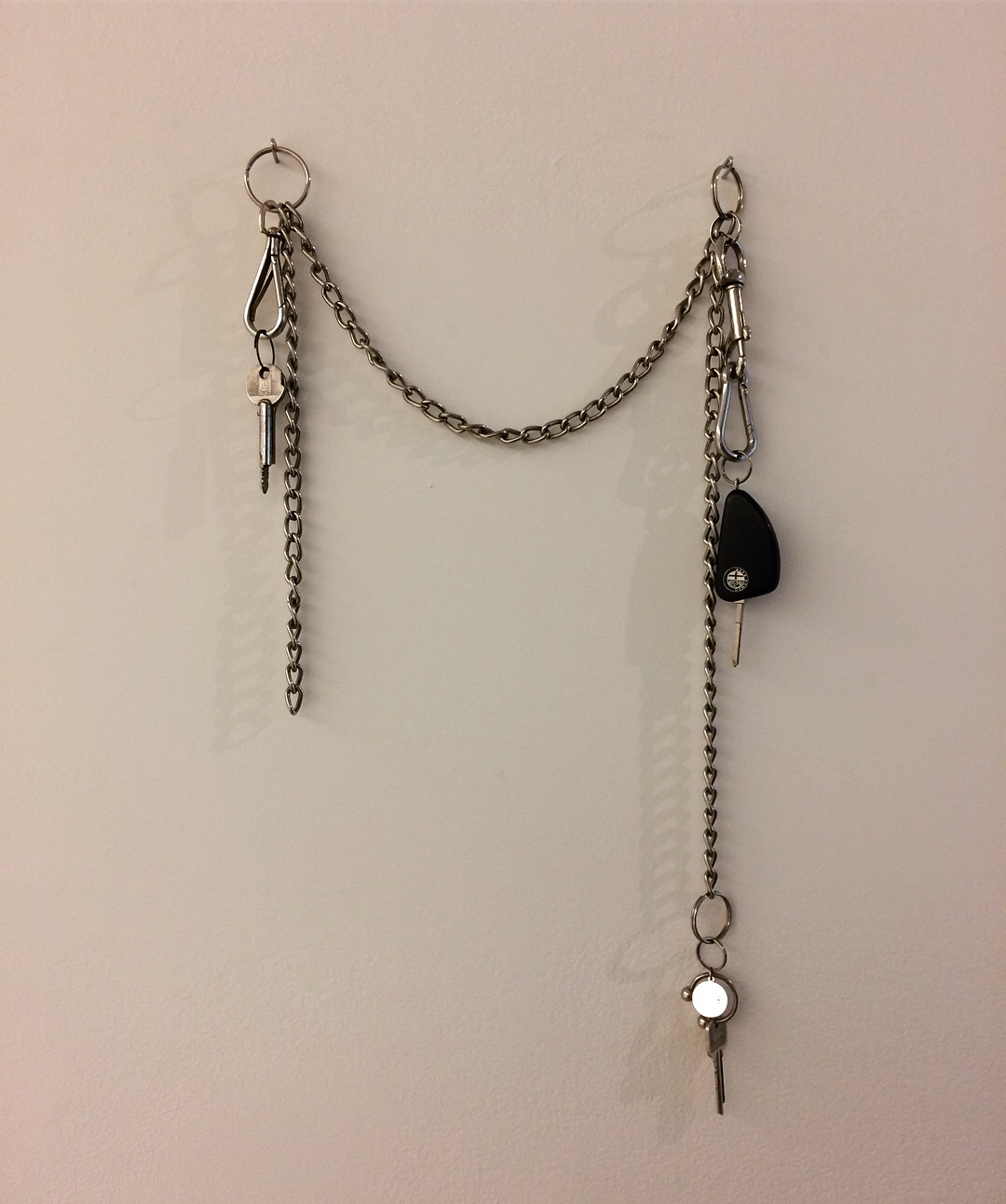 I’ll leave you here, friends, I don’t think I can even tell you what these keys are from without crying. But I will tell you, if you line up outside a museum for an hour to see anything this spring, it should be Dahn Vo’s “Take My Breath Away.” Betcha it will.