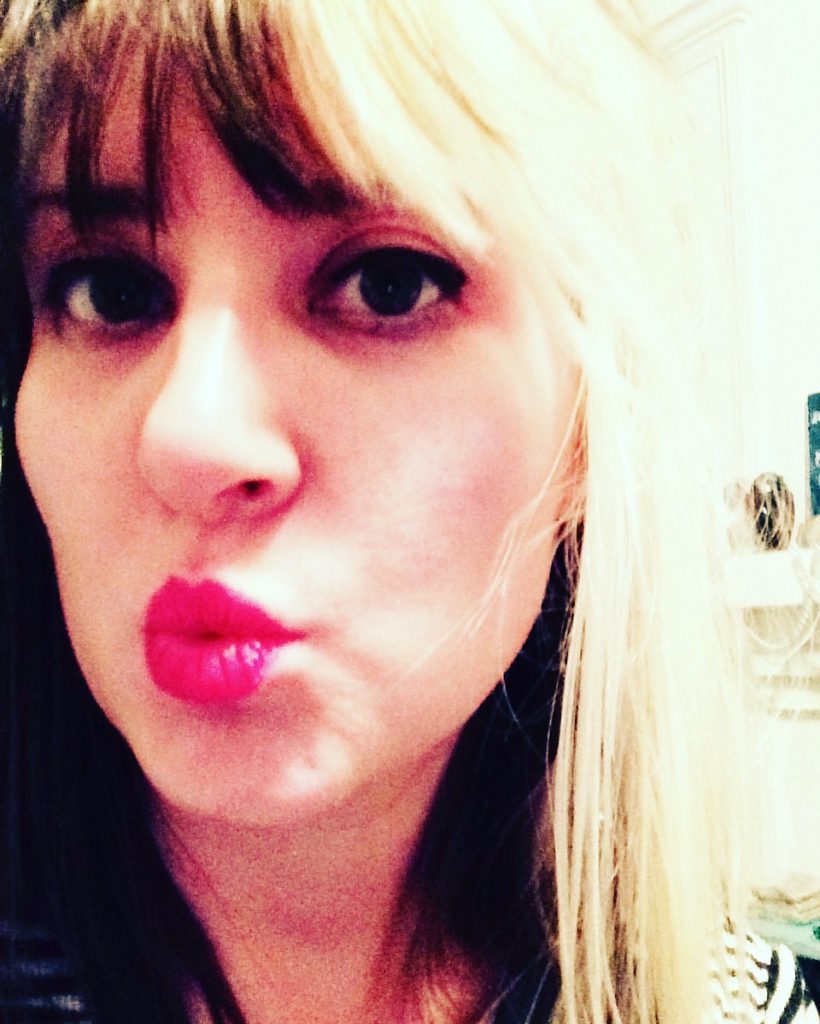 Hello hello hello and welcome to the first (slightly belated) GOOD NEWS of 2017! We’re merrily dancing on the razor’s edge of mutually assured destruction –– but because the human brain can only handle so much fear before it implodes, I’m focusing on only the things that make me happy, and forget for just a moment that I dreamed of growing up in a future WITHOUT literal Nazis running the country.

Okay, now go back over and read that paragraph in your head in the tone of voice of someone who actually believes it. Once more, with feeling!

So welcome welcome welcome back to GOOD NEWS, where the only solution to the object MADNESS of the world is to laugh. So we laugh! And we wear our favorite lipstick, seen above! It’s the Wet & Wild one I talked about in this post, in the shade (no irony here) “RED-ioactive.” (no irony).

And obviously, the BEST NEWS of the week is that I’ve been WORKING! Like, really hard! I’m really enjoying it a lot and I’m so glad this happened to my life!!!

I am so in agreement with this article on The Hairpin. FESTIVE LIGHTS SHOULD REMAIN LIT ALL WINTER. Two nights ago, I walked home up a different street and their lights were SO JOYFUL and I realized sadly, “These people are probably going to take down their lights over the weekend.” Like, This Is That Weekend. The one AFTER Christmas and AFTER New Year’s where you’re arguably still celebrating *big air quotes* “THE HOLIDAYS” so at least we got an extra full week with lights because the holidays WERE ON the weekend. Imagine if New Year’s Day was a Saturday. Everyone would take their lights down on Jan. 2nd, because it was Sunday. People. Ugh. Why do they want to stifle our joy.

In other news, The Bachelor is back on TV! I personally find Nick Viall insincere and boring! I wanted Wells to be Bachelor because he’s cute and his favorite band is the Talking Heads (he said so on Paradise). WTF, ABC? It’s like the WRONG MAN GOT CHOSEN AGAINST OUR WILL IN 2017!!!

*Sorry, sorry, deep breaths. I’ve been having nightmares more frequently and this is just one of those days where I’m struggling with the fact that I might get annihilated in World War III before I reach the age of 40.*

YOUNG POPE! MEMES! What is Young Pope? I don’t really know. I see posters for it in the subways like, a lot. Jude Law, I think? Some new movie coming out? I don’t know, and I don’t care. The Young Pope memes on Twitter are all I care about. And really, they are HILARIOUS:

🎵 young pope 🎵
🎵 you don't have to wear that dress tonight 🎵

TEEN 1: Church is so boring.
TEEN 2: It's so out of touch.
THE YOUNG POPE approaches pulpit: "Some…BODY once told me–"
TEENS: HOLY SHIT

hey now, you're a young pope
not an old pope
don't
age

Lastly, please watch this video of a cat being bathed by his owner, who is rapping about it, to remind yourself that there is still gentleness and love in this world:

So that’s the Good News of the week. Next week will be more GOOD and less NEWS, I hope? In any event, hope you’re all as lucky as I am out there, employed with cat videos and Young Pope memes. See ya next week!