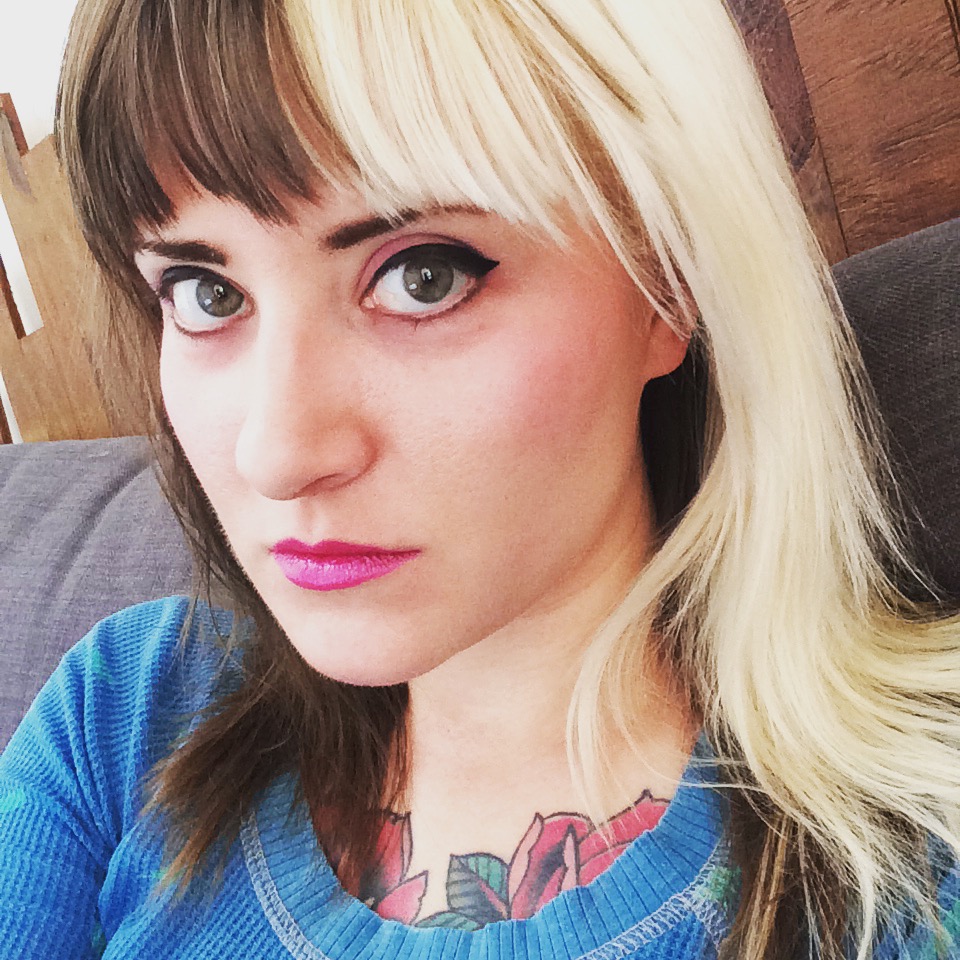 Can we somehow reach the Barenaked Ladies for comment on this past week? Because I would hope they’d say something along the lines of “Wow, that’s a lot of stuff to have happen in a week.” or something.

Hi! I’m back again with some good news, and let’s kick it off with writing stuff! 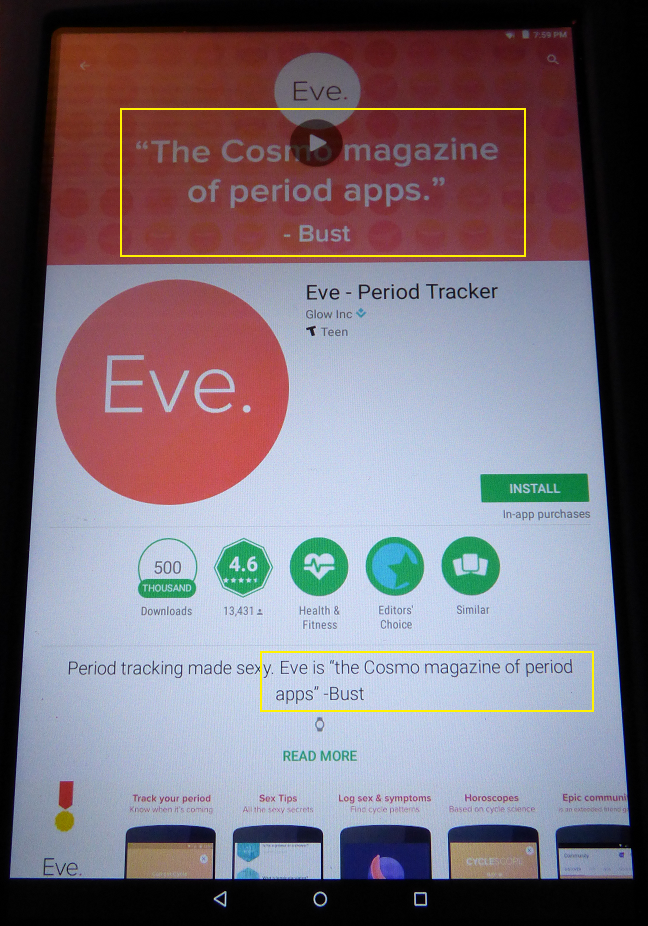 A Facebook friend alerted me that Eve by Glow, one of the period apps that I reviewed for BUST, was using a quote from my article on their app page —— TWICE! Thank you to Shannon H. for the photo and for telling me about this. I stand by what I said: Eve by Glow is an awesome app and if you know anyone looking for a new period tracker, I’d be very much obliged if you’d send them to my article, where I did exhaustive research on eight different trackers and endured a constant onslaught of push notifications reminding me to check my BBT and asking me to describe the texture of my cervical mucus while sitting on the train. I worked really hard on that article, and I’m so proud of it, and I couldn’t be more thrilled that Eve noticed and enjoyed it. I’m actually tearing up a little thinking about how happy this makes me!

Speaking of articles, I have a new piece up on OTV Magazine this week! It’s all about how I lost that Facebook lovin’ feeling. “Share If You Agree, Ignore If You Agree” is kind of a post-mortem on my decision to cut back on Facebook. I think you’ll find it very #relatable.

I’m also so very, very proud of this week’s Femnasty column. “It’s about Trump and The Real Housewives of New Jersey and how fucked we are.” — me, describing my own work. I’m heckin’ proud, you guys! That was some quality GIFing there, and I’m really pleased with how it all tied together.

Now for some personal stuff! I bought a new pair of shoes this week! I buy new shoes like once a year (if that) so it’s a pretty big deal for me, expect a blog forthcoming to introduce you to the shoes.

I also want to explain that picture up top: so for a couple of days, I’ve been trimming my bangs. Am I alone in this, or does every girl with bangs also spend several days gradually trimming her own bangs one tiny bit at a time, fearful of chopping them too short? Anyhoo, it leaves my bathroom COVERED in hair (which I’m sure my boyfriend really appreciates, given that our entire bathroom is 4′ x 4′, I’m not fucking kidding, I measured it) so going to take a crap is basically like rolling around in Cousin It’s shower drain. Mmm, yummy. So anyway, I must have gone to bed with bangs on the brain because I had a dream that Louis C.K. — the comedian, Louis C.K. — made a bet with me that he could trim my bangs better than I could. In my dream, they came out COMPLETELY uneven, like, even worse than the time I got them trimmed at a salon and the stylist cut them into an inverted “V” going up my forehead and I never set foot in that salon again, true story. Like, I cried. Then I woke up from the dream and I took this selfie because my makeup was great today and I realized something: I always cut my bangs uneven anyway. In fact, I kind of like them uneven. So, I guess what I’m saying is, Sorry for assuming you were bad at cutting bangs, Louis C.K. I guess it’s hard for me to trust because I’ve been burned in the past, but they’ll grow back, and I trust you to trim my bangs. End of story.

And now, for the GOOD STUFF! I’ve started watching Key & Peele on Hulu and it’s so funny, I’m howling at home. I had to share this video here because quite honestly, I spent like years of my life obsessed (obsessed!) with Les Miserables. I’ve committed a portion of a chapter to memory (“Heart Beneath a Stone,” Marius’ love letter to Cosette, if you must know). I can sing several of the songs in the original French, and most of “On My Own” in Spanish. I am beside myself with how good a parody this is and I had literal tears of laughter running down my face when I watched it:

So the other day my boyfriend sent me this Instagram because he knows me so well:

And I responded by sending him THIS one because he’s the one who introduced me to The Talking Heads and he told me once that he dressed up like David Byrne for Halloween in an oversized suit and I just thought that was the coolest thing I’d ever heard (OMG):

Speaking of things that are just too cool for us to deserve them, how amazing was the showdown of scientists vs. Trump’s anti-science gag order this week? Kicked off by the official verified account for the Badlands National Park Service (aka not this one), who defied the Alt-President by tweeting Facts. About. Science. The tweets were scrubbed off the account, but parody accounts quickly sprang up to BURN the Cuntgrabber-in-Chief and then (apparently) the gag order was lifted (who knows anymore #altfacts) but MY GAWD:

The Badlands were created over eons through the gradual erosion of sediment. The erosion of U.S. democracy, however, will be far more rapid.

Finally, I haven’t seen La La Land and honestly, that nonsense is so far down on the list of movies I want to see this winter that I doubt I’ll ever see it, but I had to LOL at the parody, which is set one stop away from me by G train! You know how I feel about Brooklyn-centric parodies. I LOVE ‘EM.