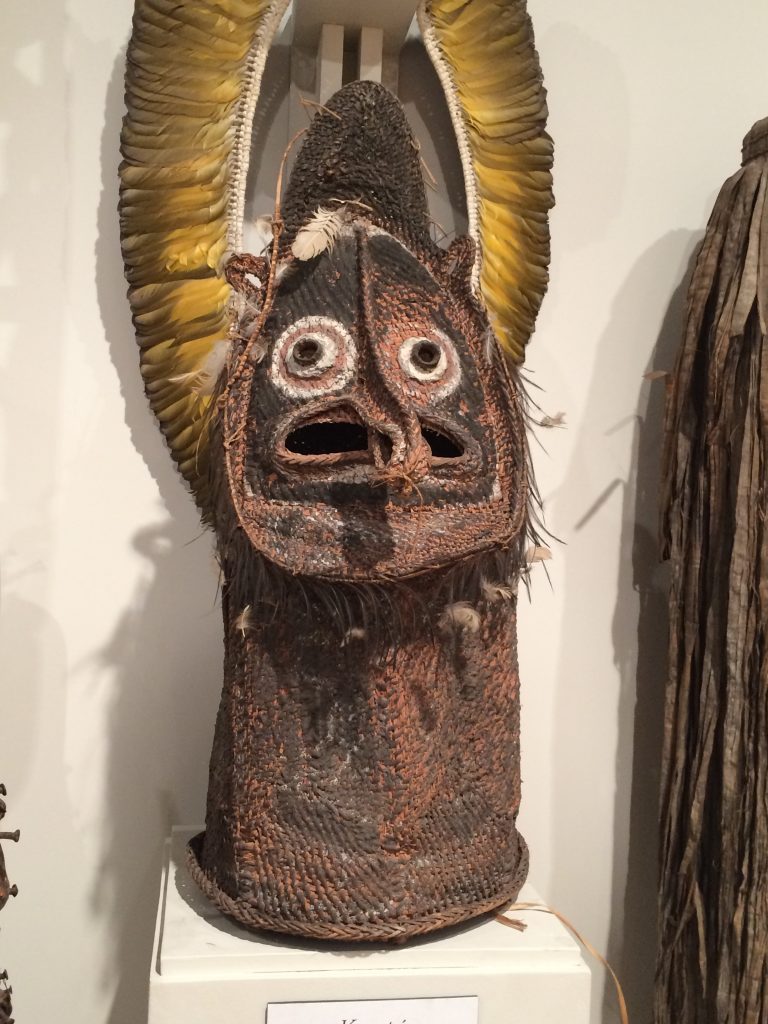 As I promised, this story is either going to be cute or creepy. Kinda like this mask. I guess it depends on your perspective.

Back in college (almost ten years ago, where does the time go?), I had a favorite professor. He was just my type: everyone says he’s demanding and a way harsh grader, but if you’re studious and passionate about the material… Just my type of TEACHER! I’ve always had a thing for the strict type.

His classes were notoriously difficult. I got a B+ on his final exam. So, obviously, these classes were TOUGH, but shit, I loved this class. He taught history of theatre parts 1 and 2, or something like that. Doesn’t sound so complicated, does it? But these classes were… everything. 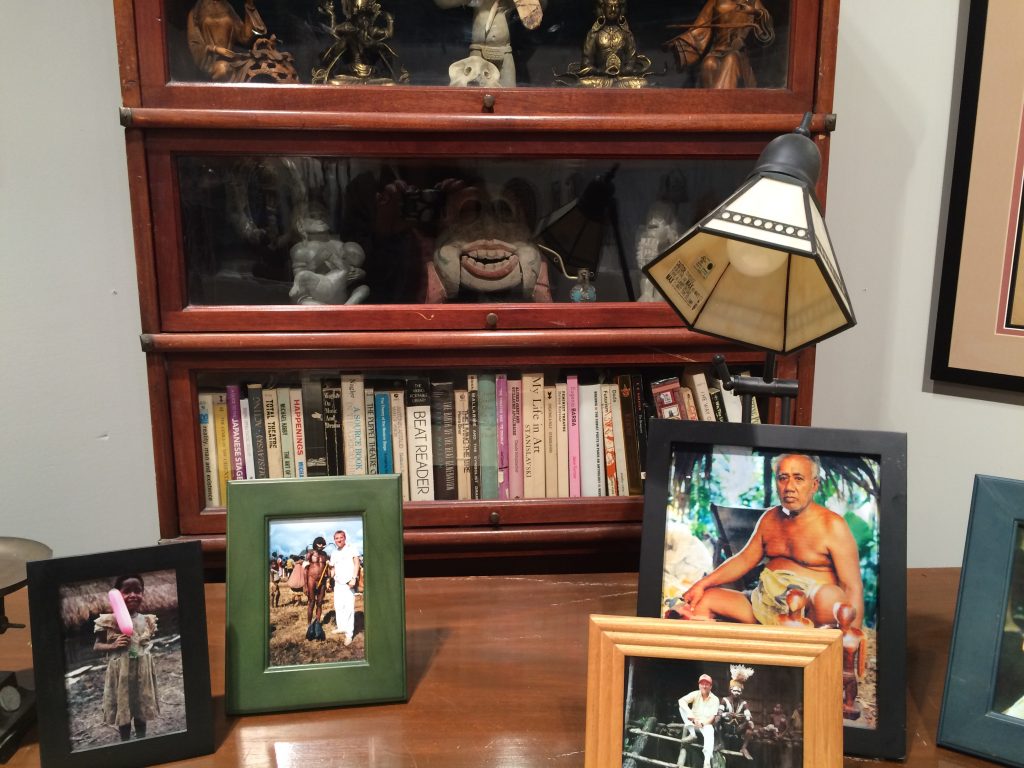 Everything to me, I should say, and here’s where I sort of start to blush a bit. At the time, I had never lived anywhere outside my small town. I knew NOTHING of the world. His lectures were like being lifted out of my seat in the bland classroom, plucked out of my own miserable life and dropped into MoMA, or the Met. That’s the closest way I can describe it. He enraptured us with lectures ranging from the Middle Ages all the way to the 20th Century. I learned more from him than anyone else about drama, art, history, and music. I mean, he played us “Lady Jane” by the Rotary Connection, and it was like the walls around me exploded away. Just listen!

I also had the privilege — oh, what a privilege it was — to be one of a handful of students to take his special performance art class. It was the best class I have ever taken. It may be the highlight of my academic career. With very little hand-holding, we were encouraged to put on short plays and performance pieces of our own. It was one of the greatest freedoms I’ve ever been gifted. I learned to see art, performance, life, everything differently thanks to his classes.

At the end of the semester, our small group was invited to have a party at his house. I don’t really remember there being much of a party, because we were all entranced by his house, which was a collection of incredible items he’d collected from his global travels. And that’s where we kind of get this post back on track: 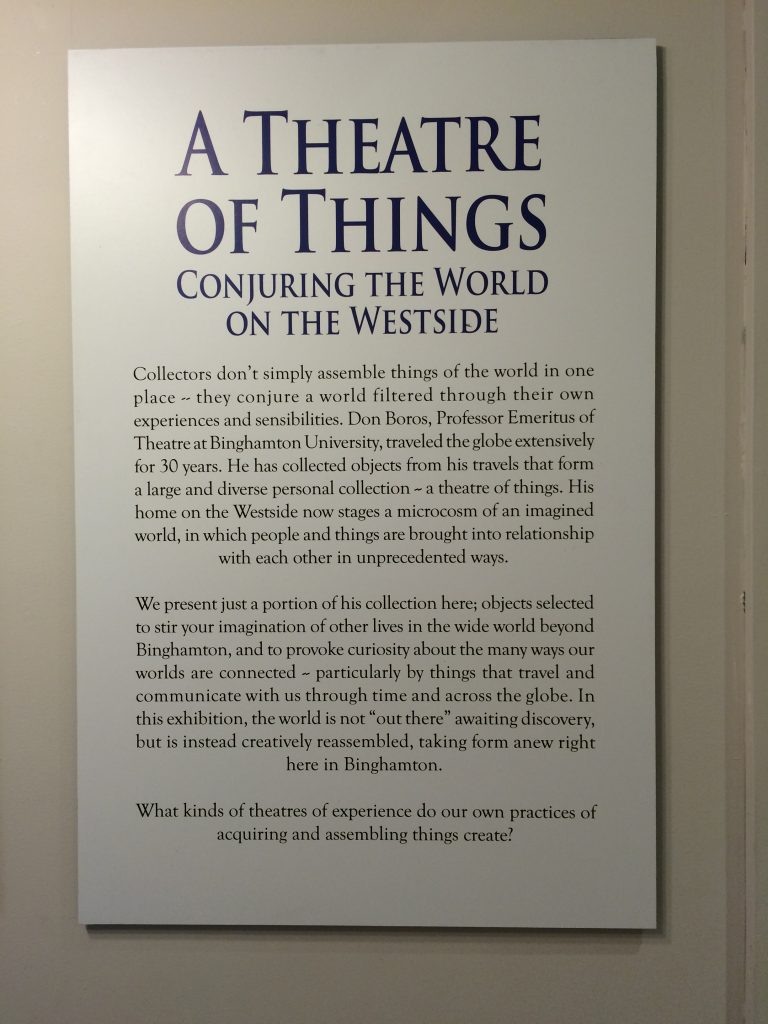 The local museum in my hometown (where I also went to college) borrowed some of the pieces from his vast collection for an exhibit. So, of course, when I had the opportunity to go, I jumped at the chance. Some of them looked very familiar, but there was also this feeling seeing it all again. Kind of the feeling he’d instilled in us in his class: that things in this world exist beyond your imagination. That there is still so much to see, learn, and be inspired by. That the world and the past and the possible all unite around art and creation. 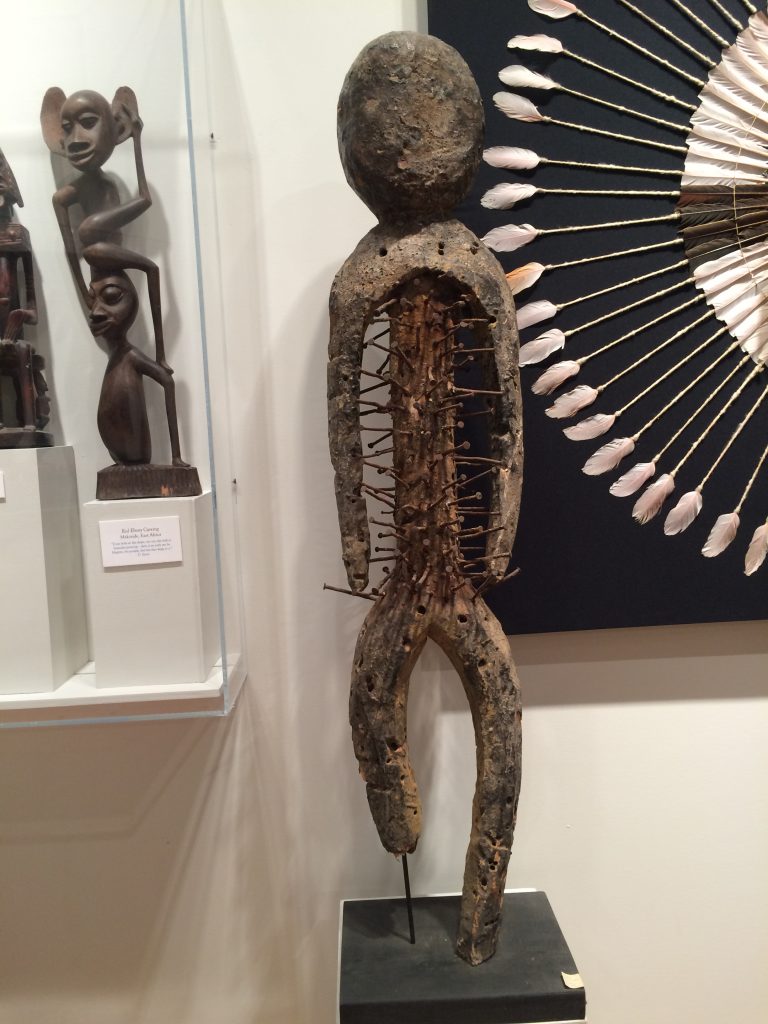 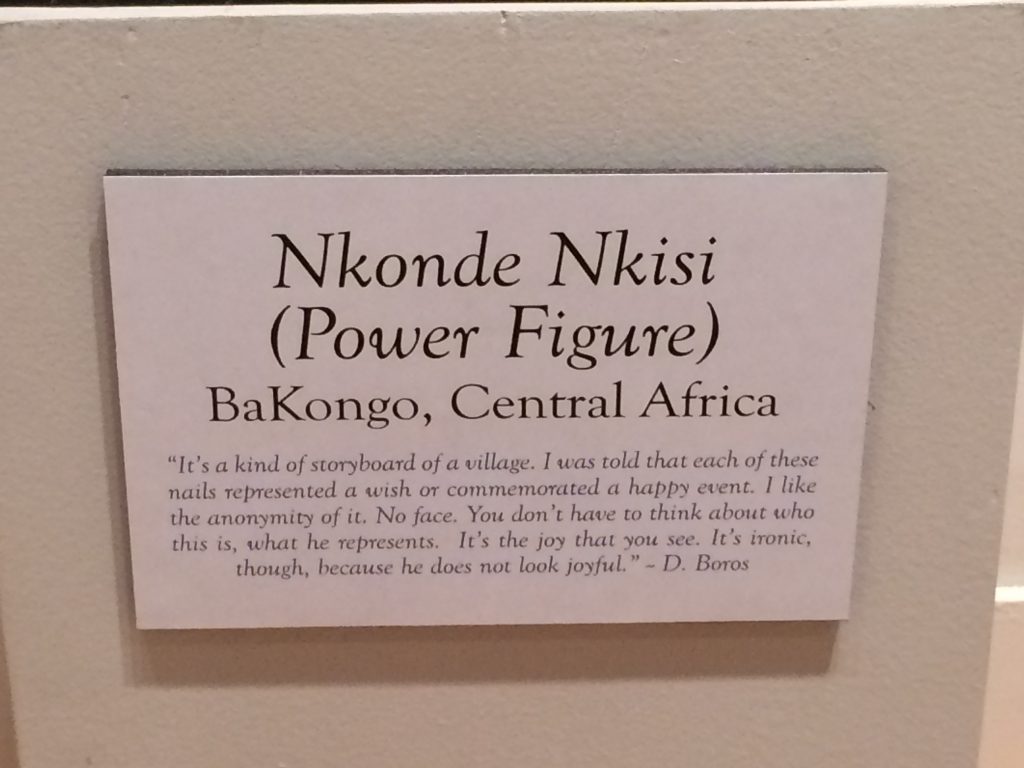 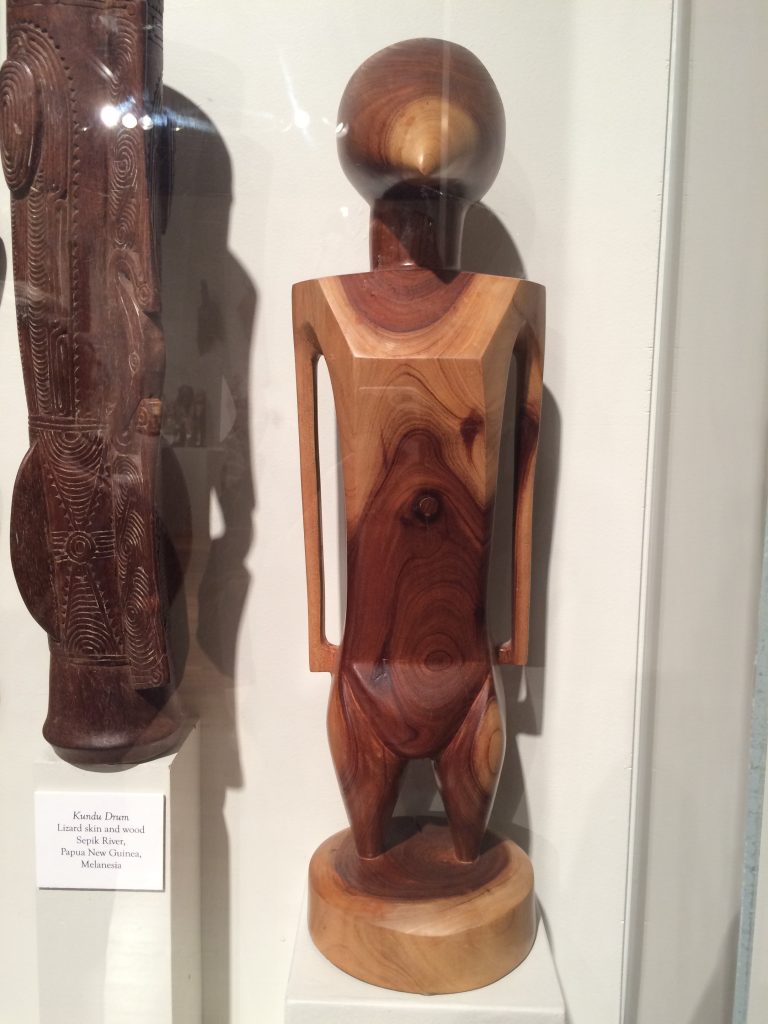 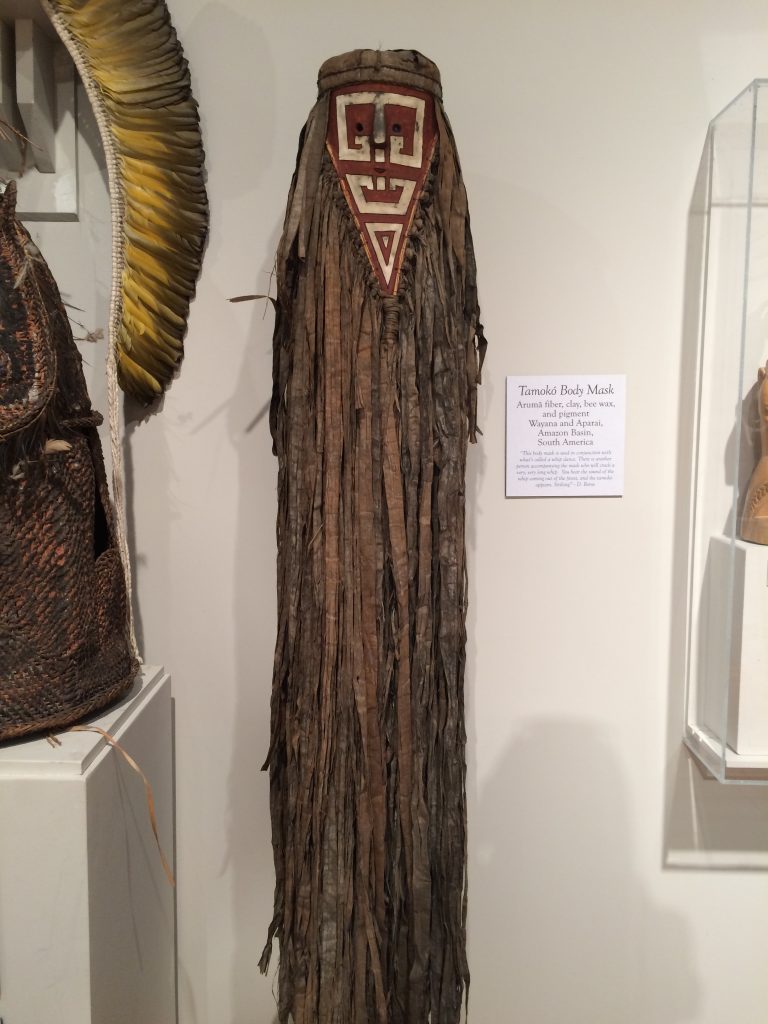 And now I’d like to share a weird memory with you. Here’s where it gets borderline creepy.

So I hit a rough patch at one point, and was considering dropping out of school before finishing. I was just angry and helpless and lonely, and this particular professor found me banging away on the piano backstage in Studio B. It would have been awkward and embarrassing, to be caught like that, just violently having out my emotions on a keyboard. He sat next to me on the bench and, instead of prying, told me that an ex-girlfriend of his used to play the piano, too.

I’m sure he wouldn’t remember such an insignificant interaction, but it grounded me back in reality at a time when I needed it. So yeah. He was a tough grader. I still feel like I deserved that A-, at least. But whenever I see something that inspires me in a museum, or think of an idea for something I’m really interested in, or when I’m really on fire giving a ghost tour, or doing something wild and outrageous (Burning Man cough cough), he pops into my head and I think, huh. In this moment, I am living up to the example he set.

I’ve often joked that I want to be Don Boros when I grow up. Maybe someday, I will. Hope you enjoyed the art and the story. I totally did. Thanks for listening. 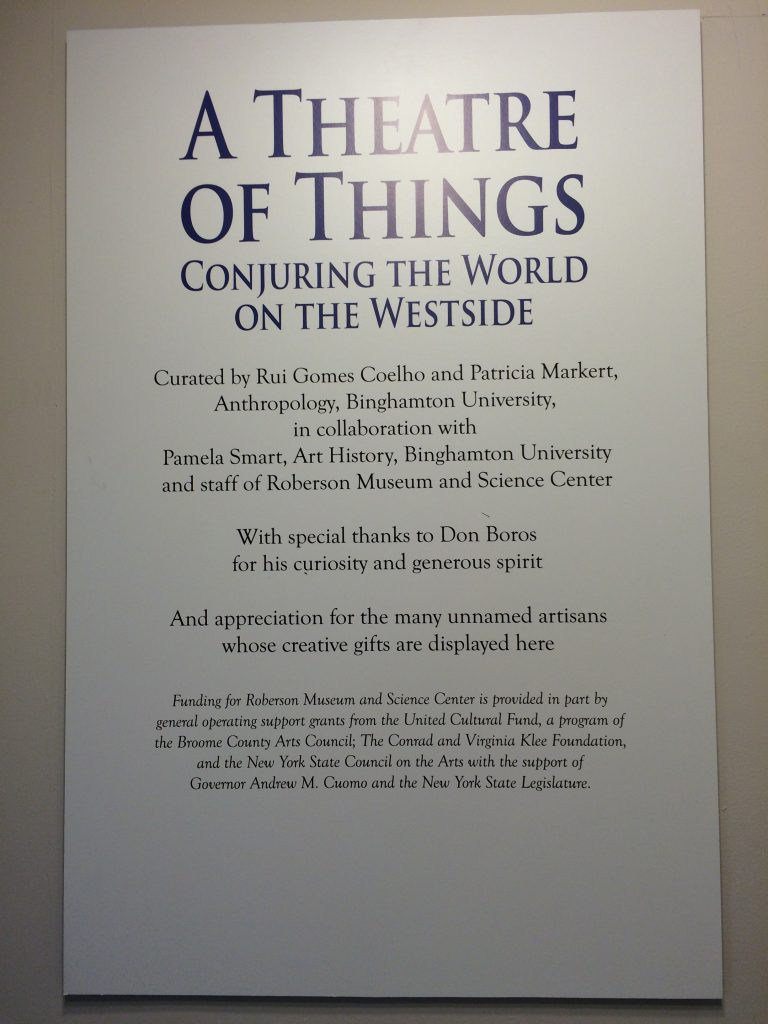