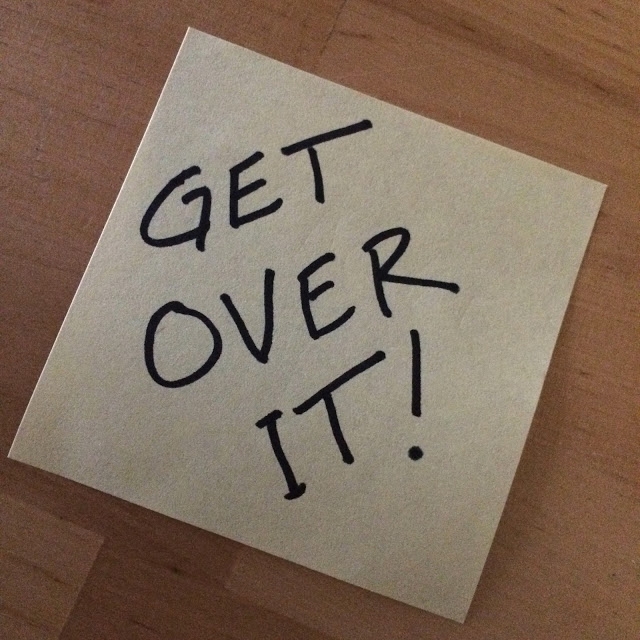 I get it, I get it, we like to yak. We like to gripe, we like to complain, and we LOVE to air our grievances. Sure, most of the time, there’s stuff to be pissed about: global warming, homophobes, dress codes, TRUMP. But henceforth, I declare an absolute kibosh on complaining about the following 5 things.  That’s right, get right the fuck over these five topics, because I’m sick of hearing about it!

Cell phones were invented in 1973. It’s true! On April 3, 1973, Motorola employee Martin Cooper placed the first cell phone call from midtown Manhattan back to the Bell Labs in New Jersey. Cell phones are older than me, and I’m old as fuck. It took two decades for cell phones to become popular and accessible to the general population, and another generation later, cell phones are everywhere. So there’s no excuse for you if your cell phone rings in a movie theatre! So get the fuck over the fact that everyone loves their phones. Phones today are a fucking miracle! It’s a pocket-sized (bigger than pocket-sized, if you’re talking about girl-pockets) computer with more technological capacity than the computers that sent the first rocket into space. Stare at it! Take duck-face selfies with it! Take it to bed and tuck it under your pillow and check it obsessively when you wake up in the middle of the night! And to everyone else: shut the fuck up about it. Cell phones kick ass. Get over it.

Strippers — consensual sex workers — get so much fucking shit. And why? Sex work has been called “the oldest profession” because as soon as man learned to paint on cave walls, they painted cavewoman titties. Boobs are great. People want to look at them. If women want to show them, why not involve payment? Wee-wooo, here comes the Fun Police! “You can’t charge for sex because it’s precious! You can only give it away for free!” What? Okay, what I really don’t understand is women who hate on strippers cuz you’re basically perpetuating the same “be sexy but don’t be sexy” double-standard that also applies to YOU. Oh, you’re worried that a stripper is going to conk your man over the head and drag him back to her stripper cave? Right, that’s the same stupid logic that the McDonald’s Drive-Thru Window attendant is going to pull your man through the window of his car and drown him in the deep fryer. Or the FedEx guy is going to trap your man in a giant box and wheel him off to a warehouse forever and ever. What does a stripper want with your man anyway? She wants him to pay her for her service and leave so she can go home, shower her body glitter off, reheat some casserole, watch Downton Abbey, and go to sleep. Get the fuck over strippers, I’m sick to fucking death of hearing about it.

Reality TV is so everywhere, it’s boring. Straddling the boundary between documentary and game show, there is such a spectrum of different shows that fall under that category that it’s time to reconsider our opinions on the genre. Writers Guild of America, West credits Allan Funt with creating the first reality show, Candid Camera, way back in 1948. Fast-forward the tapes over 60 years later, and you’d be hard-pressed to find a single network that didn’t have at least one reality show in its programming schedule. Remember when we laughed at Survivor and Joe Millionaire and whatever the fuck Paris Hilton and Nicole Richie were doing and thought, “this crap is never gonna last.” HA! Were we ever wrong! And just like our grandparents had to accept that “Rock and roll is here to stay,” so must we join hands to form a circle of acceptance around the Teen Moms and the _____ of Loves and Snooki and Simon Cowell to say, “We Love You.” Reality TV is TV now. Get the fuck over it, or get rid of your TV.

Vegans are people too. Get the fuck over it. When I became a vegetarian in 2000, I definitely had friends and family members who thought I would starve to death for lack of food options. Yes, these people couldn’t conceive of not eating animal flesh 24/7. It’s called a “salad,” you freaks. Jesus Christ! Sixteen years later, I live in Brooklyn, and vegan cuisine is easily found everywhere. It’s called SPAGHETTI, you weirdos! But in all seriousness, vegans get a bad rap. You know the stereotypical vegan: some airy, hippie-dippie fusspot in a tie-dye ascot and greasy ponytail, lecturing fellow diners on the sufferings of cows and bees? First off, that’s not what all vegans are like. Second of all, they’re right. Meat eating is a burden on our planet that we don’t need. Sorry if that’s an inconvenient truth for you, but the vegans are right. Maybe you should listen. STFU, and let the vegans alone.

The Kardashians are the closest thing Americans have to actual royalty. Get it? Because they’re obscenely wealthy and famous, but don’t actually do much of anything? And yet, they are all over our tabloids, TVs, and Twitter feeds. FACT: most people have a love-hate relationship with the K-klan. As much as we are obsessed with every selfie they take, every child they make, every Internet they break, every cry they fake…we’ll be watching them. But we’re not happy about it. “Ugh!” we scoff, “look at what Kim K did for attention! Won’t she just shut up and go away already?” we ask no-one in particular. Then we retweet it, retweet 6 jokes about it, pen a think piece on it for our blogs and bring it up with our friends to discuss. It’s time for us to recognize that we have a toxic relationship with the Kardashians. We have enabled their fame! If we just stopped buying their magazines, watching their television shows, and buying their overpriced lip glosses, they might actually go away. That’s what you want, right? Unless you admit you secretly LOVE the Kardashians. Nobody is FORCING you to give them attention! Unlike British royalty, Kylie isn’t on our money (yet)! If you look away, you will not see. Stop acting like you don’t have a fucking choice. Get the fuck over the Kardashians already.

Okay, so that’s what I’m sick of hearing about. What are you sick to fucking death of hearing people complain about? Leave a comment.