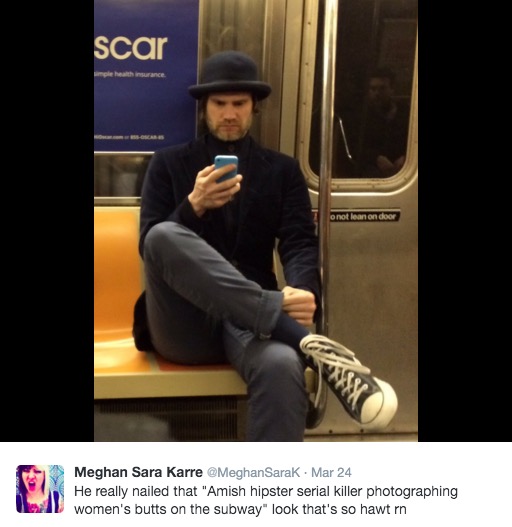 Playing Shitty Music Out Loud — look at everybody else’s ears.  What do you see?  Those are called “headphones.”  People wear them in public.  If you’re wearing headphones and I can still hear your music, then you need to re-evaluate your life.  Seriously.

Spitting — yo are you brushing your teeth on the D train platform?  NO?  Then you have no reason whatsoever to spit.  So you just bought a big ol’ bag of sunflower seeds, and you are under the delusion that the shower of shells you’re spewing onto the tracks are going to germinate a field of beautiful sunflowers three stories below 36th Street?  Oh wait, no, that’s bullshit.  Spitting on the train is vile.  Would you spit on the seat of a cab?  If I gave you a ride, would you spit on my dashboard?  So don’t spit on the fucking train, you wretched creature.

“Nice Legs, Do They Come Together?” And Other Things I Wish I Said To Men On The Subway

“Showtime” — the top-left corner on Living In New York BINGO is “seeing a breakdancer kick an unsuspecting passenger in the face on the subway.”  You’re not really an official New Yorker until you’ve had to dodge a sneaker to the face on the E train.  In eight years living here, I’ve seen one female dancer on the train.  ONE.
Singing/Rapping Aloud With Their Headphones — Well, congratulations, look who got a set of headphones!  Now let me tell you how they work.  The bottom-center square on Living In New York BINGO is being alone on a deserted platform late at night and suddenly hearing the visceral scream of “RAPED THAT BITCH IN THE ASS!”  Is it a dangerous murderer?!?  No, it’s someone singing along with their headphones.

One of the proudest moments in my life as a New Yorker happened in the High Street underpass.  A creepy guy was singing aloud to his headphone about cracking skulls or some nonsense, and I just decided to sing along with my own headphones to the witty songstylings of Billy Joel — “Leave A Tender Moment Alone.”

Blocking The Doors — you say, “But Meghan, are you sure women don’t do this too?”  And yes, leaning against the doors for balance when the train is in motion is a universal necessity.  My pet peeve is on the guys who keep leaning when the doors are open, defying the laws of gravity and physics to prevent anyone from getting in or out of the train.  Nothing says “I don’t care what the function of a door is, I’m comfortable where I am” like ignoring angry people on either side of you while you play Candy Crush Saga on your iPhone 6S during rush hour.

What bad behaviors did I miss?  What pisses you off on the subway?  Should we collect these “courtesey counts” posters and burn them in a fire, casting a spell on all those who violate the cartoons’ directives?