Around Valentine’s Day, you see lots of sappy posts cropping up from coupled bloggers about how much they love their significant other, how they’re the greatest in the world, blah blah blah.  This isn’t one of those.

Well, obviously, all those other posts neglect to mention the fact that my boyfriend is clearly the best anywhere.  Or does your boyfriend eat bugs — multiple times?  Does he put on Star Trek: The Next Generation at your request, then let you fall asleep after ten minutes in his armpit, then when you wake up for the last five minutes, act as though you didn’t miss anything important to preserve your dignity?

I see I have succeeded in making you jealous, but I don’t want to give the impression that my boyfriend is perfect.  No, in fact, he has a serious flaw, one that is very difficult to overcome.  My boyfriend *draws breath* HATES grocery shopping.

Have you been revived by emergency personnel?  Good.  Now, I myself cannot figure out why this is so.  Maybe it’s the harsh fluorescent lighting.  Maybe it’s the strictness of adhering to the grocery list.  HE DOESN’T EVEN LIKE TRADER JOE’S, PEOPLE!!!

This is obviously a serious incompatibility issue.  I was a cheese-sample girl in Whole Foods once, after all.  I love the grocery store, smelling the bakery smells, ogling the bright salmon steaks, asking for “just a sample” of the fancy cheeses…  I was raised on Wegman’s!  Going to the grocery store was a two-hour escape from home, open 24 hours, infinite possibilities.

This is not to say he doesn’t go grocery shopping AT ALL:  he does!  Why, just this week he brought home a surprise three bags full of vegan meat substitute, gluten-free pasta, small cheesey snacks and the Cidre I like!  He is often bringing home fish fillets and fancy treats…

But give that poor boy a list and watch it all go to hell.  He’ll come home with maybe three of those items, a massive jar of fancy olives, truffle cheeses, and harissa-smoked sardines.

Bless his beautiful heart, he does not enjoy grocery shopping.  He builds boats, jumps out of helicopters, and sets of fireworks (both literal and metaphorical, hubba hubba).  He is an entrepreneur, a problem-solver, a leader.  He is fearless.  He is a bottomless well of empathy.  He is the life of the party.  What Jekyll/Hyde transformation occurs when he steps through the automatic doors of Key Foods, Associated Foods, C-Town?  It is a sobering reminder that he is above all these other things a mystery, much like this can of “conch” that he assures me is delicious and I guess that’s what we’re having for dinner. 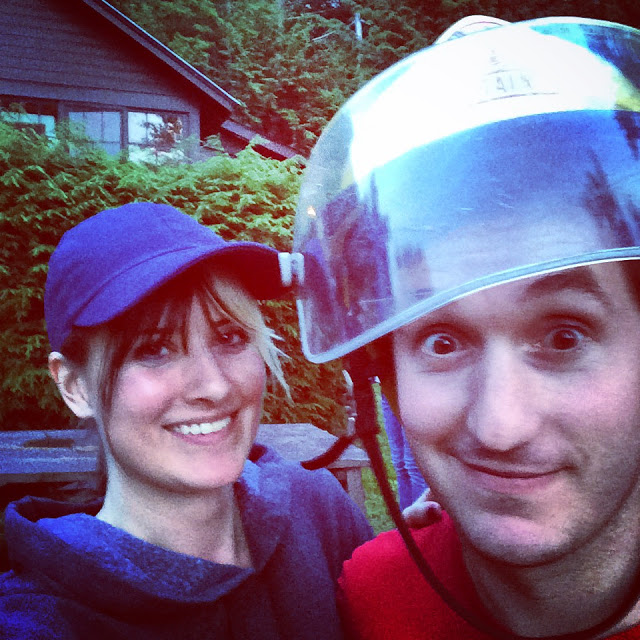