Every year, the NYPIRG Straphangers Campaign evaluate every line of the NYC Subway according to their criteria and rank it from BEST to WORST, publishing a “Subway Report Card” to help us know which lines to avoid.  How do they determine which subways are up to snuff and which can suck it?  By asking themselves, “What do New Yorkers want?”

“What do subway riders want?

They want short waits, trains that arrive regularly, a chance for a
seat, a clean car, and understandable announcements that tell them what
they need to
know.”

Maybe in Wichita, Kansas!  But this is New York, home of high taste, demanding attitudes and five-minute Starbucks orders.  A city that demands its half-caff skim milk double blended mocha frappuccino with extra whip isn’t going to settle for “short waits” and “sitting down.”  We’ve built an entire culture around complaining, and guess what?  I’m about to do Just That.  Here, NYPIRG Straphangers Campaign, is your NEW criteria for NEXT YEAR: 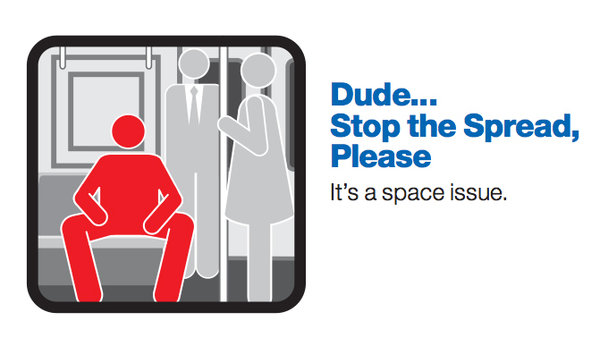 Manspreading has always been a scourge, but it seems to be, ahem, spreading faster than ever.  What train lines have the biggest problem with men “letting it all hang out,” NYPIRG??  Why is it that a dude on the A train needs 5 meters of thigh spread while guys on the G train are able to keep their knees together??  We’ll need to do a series of tests to isolate the source of this.  Maybe some stopping, maybe some frisking to help determine if manspreaders actually need that room, or if they’re overcompensating.

Yeah, NYPIRG, litter is a problem, but it’s when people turn the car into a litter box that I really take issue.  Guys, just hold it until you can get to a Starbucks, like we all do!  If I could count the number of times I’ve seen public urination on public transportation…

Okay, but seriously now.  Every woman in NYC has a story of being touched in public.  Groping is a fact of life.  I had my butt grabbed on the train once, too.  Subway groping is probably the one reason I’d go out of my way to avoid a certain train.  THIS, NYPIRG, would be an actually useful piece of information!  How about it, HUH?

NYPIRG, nobody likes getting kicked in the face on their commute.  We hate it almost as much as the morning rush hour E train preachers.  Give trains demerits for bad breakdancers and self-ordained preachers, like they deserve.

Ultimately, however, all the data you can compile isn’t going to matter.  New Yorkers can’t avoid trains just because they don’t like them (I hate you forever, D train!).  You take the train you live near, and that’s that.  Look, if you really can’t stand your train, you’ll just have to move somewhere else…which brings us to the State of New York City Real Estate Report Card and we never, ever want to go there.