So the BIG NEWS this week is that Playboy won’t be printing images of naked women in their magazine anymore!!  I’ll give you a minute to digest that news (and to read the article behind the link) because I know that it is JUST SO SHOCKING you’ll need a second.  Are we all up to speed?  Good.

When Playboy debuted in 1953, this was the image of Marilyn Monroe that they displayed on the cover: 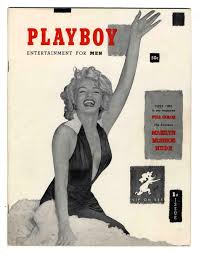 I challenge you, next time you’re standing in the checkout at the grocery store, to find a magazine with a woman on the cover wearing MORE CLOTHES than Marilyn is wearing on that cover.  Is it a tabloid.  Is it a picture of the reigning Queen of England.  I rest my case.  Nudity isn’t just easier to find on the Internet, but the idea that “sex sells” is everywhere.  Why pay for Playboy when you can buy any other magazine?

Of course, the most impressive feature boasted by the Playboy franchise was the centerfold.  Quite genius, actually.  Featuring a nude or mostly-nude model in a pose suggestive of writhing in self-pleasure, this was the draw, at least, for people who were interested in more than the articles.  The centerfold was a star, and she was interviewed about her hometown, pets, aspirations, and her turn-ons.  I think that last part is amazing.  Even when the answer is a glib “a man who cleans up after himself,” the notion of asking a woman what she wants is a small step in the right direction.  This centerfold, guys, is not an object easily had.  This is a woman who knows what she wants, is self-assertive, and isn’t going to settle for less than “candlelit dinners and long walks on the beach.”My turn-ons, FYI, include feminism, sex-positivity, and evolution.  So when Playboy says they’re going to include a “sex-positive, feminist” sex advice column, this could only be the clear evolution of asking its centerfolds about her turn-ons.  I can’t wait to see how this manifests in future issues.

I think it’s smart of Playboy to realize that times have changed, and to change along with them.  I’m excited to see them moving in the direction of titillation, and away from just TITS!  Even if this is a publicity stunt to get people’s attention to drive up sales, they’ve piqued my curiosity.  My turn-ons also include novelty, and I’m willing to bet a lot of people feel the same way, too.