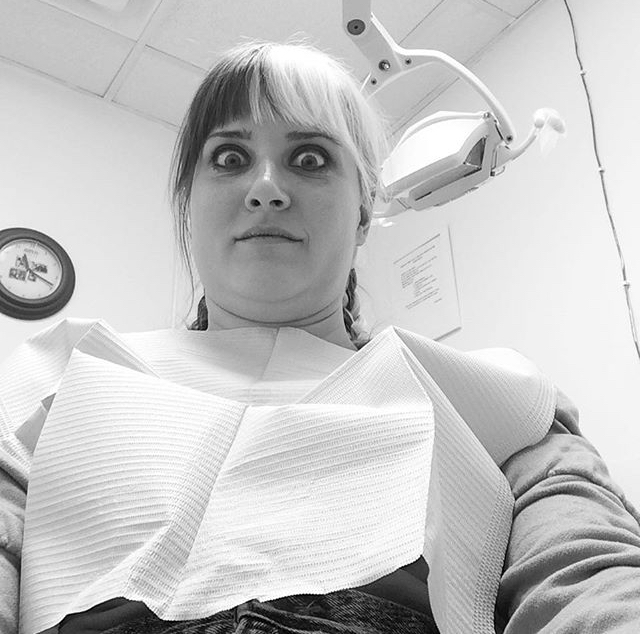 This is the face of a woman who hasn’t been to the dentist in ten years. And she’s terrified.

So there are a couple of factors contributing to the fact that I just didn’t see a dentist at all for 1/3 of my life. Chief among them being the fact that I didn’t have health insurance from about 2007 onwards. The last time my teeth fell into the hands of a professional was probably around 2008-2009, when my then-boyfriend’s mom’s family friend gave me a cleaning for a very discounted fee, out of pocket, as a favor. This was back-alley dentistry pre-Obamacare. Park across the street, come before the office “officially” opens, no medical records needed, pay in cash. Not kidding.

Prior to that, I didn’t *love* the dentist. I had braces from freshman year of high school all the way into freshman year of college, and my orthodontist was a skeevy gross human, but that’s another story. I remember one visit to the dentist for extractions, prior to getting my braces put on. I was given the shot to numb my gums, then left to wait in a room for so long that the numbness wore off and the procedure began with me, feeling EVERY BIT of my teeth being ripped out. I begged them to stop and give me another shot, which in turn, had to sink in to take effect, and the whole thing turned into a daylong nightmare of needles and teeth-pulling and dental hygienists getting frustrated with me, the adolescent patient, for feeling pain and begging to be treated in a dental fashion befitting the best practices of the late 1990s as opposed to the early 1890s.

With that rather scarring experience in mind, I dragged my feet on seeing a dentist after I got health insurance in 2014. And when I finally had full dental coverage, I still balked. Somewhere in the ten years I spent not seeing dentists, I was the Employee of the Month at a bulk candy store. Yeah, remember when I worked for Dylan’s Candy Bar for about five years?!? I’m probably to poster child for cavities! I accepted that my teeth were probably the worst in the world. My mouth was like the box in the ol’ Schrodinger’s Cat puzzle: as long as I never opened it for a dentist, my teeth were both simultaneously FINE and NOT FINE.

Then, of course, I couldn’t ignore it anymore. My wisdom teeth started to come in, and they HURT. Debilitating aches that made it difficult to talk for weeks at a time. The time had come to BE AN ADULT, as much as I hate the phrase.

The thing about facing this fear is that it was simultaneously not as bad as I feared, but exactly as bad as I expected. Yes, my wisdom teeth need to come out: I need to have surgery. I’m absolutely terrified. Yes, I had as many cavities as I feared. I’ve been back to the dentist twice already to get needles in my gums and drills in my teeth. However, it must be said that the worst I feared has not come to fruition: there was a part of me that worried that as soon as I opened my mouth, the dentist would recoil in horror and demand that all of my horrific teeth be removed at once.

Hindsight is 20/20, as they say. My teeth may be terrible, but my hindsight is sharp as ever, and of course I know that my teeth wouldn’t be nearly as bad as they are IF ONLY I’d been seeing a dentist regularly every 6 months, as recommended. Of course, we Millennials know this isn’t possible. There’s a generation of us who aged off of our parents’ health insurance after college and weren’t able to get jobs with health and dental benefits packages straight after graduation. Those internship-and-coffee-shop-years we spent hoping that whatever ailed us would just go away seem a distant and laughable memory, now, almost a decade after Obamacare. Ask any of your friends who are 35-40 years old and they’ll laugh about the times they almost died ignoring high fevers, or limped around on sprained ankles for months, avoiding the hospital because it would surely bankrupt them and ruin their lives. HAHA! OH WHAT FUN!

As I explain this humongous gap in my medical history to doctors, shrinks, and dentists, it’s almost with apology. I’m sorry, I let my body fall to shit! This one fragile vehicle for my soul, the meat-sac that defines my tenuous grasp to all of existence, I just sorta let it get run down for a few years but I’m trying to be better about it! As if it’s somehow my fault for not being born with the wealth and privilege to pay my way without health insurance. But there’s also utmost gratitude: Were it not for Obama and the other lawmakers who worked tirelessly to push for the revolutionary idea that money makes a life worth living, I wouldn’t be sitting in this dentists’ chair/examination room/therapists’ couch/stirrups at all. Even now, my ability to take care of my body is constantly at risk, threatened by the ever-changing whims of lawmakers and the waves of employment I’m able to secure for myself.

But this isn’t a blog post about socialized medicine, at least, not entirely — although we definitely should have that, obviously. This is a blog about how I faced my fears and finally found myself in that dentists’ chair. Finally.