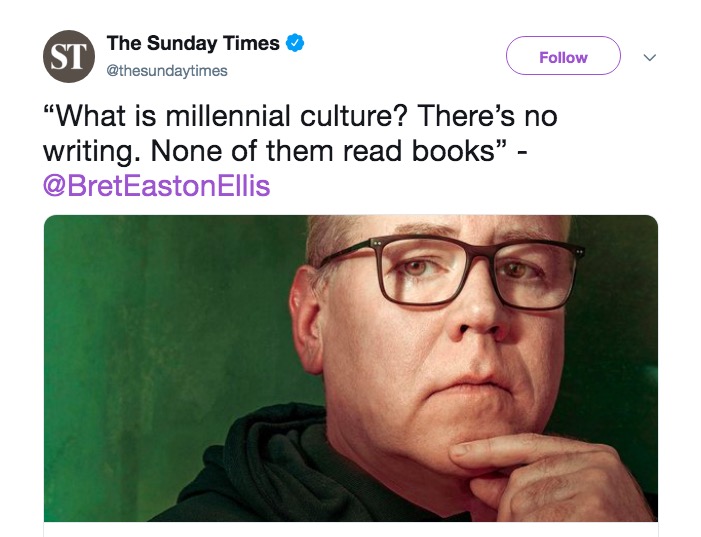 Bret Easton Ellis article for The Sunday Times which is conveniently hidden behind a paywall. If you’re complaining about a lack of reading and bragging about your writing abilities, I guess a good way to ensure your opponent has no leg to stand on is to hinder their ability to access your alleged “writing.” So, because we can’t read the article, we’ll have to base our rebuttal on just the pull quote, and that’s okay, because there’s enough.

“What is millennial culture? There’s no writing. None of them read books” – @BretEastonEllis https://t.co/CGMogf1s7B

First, some generational perspective, as this is a culture war: Bret Easton Ellis was born in 1964, which makes him either the youngest possible Boomer, or one of the first Gen-Xers. As Boomers are the ones who usually start the “Millennials are ______” conversations, let’s start there. Ellis may be attempting to position himself in this culture war behind the barricades of the Baby Boom generation, who earned their right to complain about Kids These Days by protesting the war in Vietnam when They Were Our Age, and then voting for Reagan as soon as they could afford a house. And since Ellis was only 5 at the time of Woodstock, he might be trying a little bit too hard to be the mouthpiece of the Boomers when his nihlism and discontent puts him more neatly with Generation X, the MTV generation — too young to drive during the gas ration years, but graduating college into the relative prosperity of the late 80s and 90s. The Berlin Wall came down on Gen X’s watch, but now they enter middle-age, still working for The Man. Gen Xers are culturally portrayed as whiny, lazy, self-entitled, navel gazers (Wynona Ryder, Reality Bites) —— sound familiar? Don’t worry, Millennials, I know it does. Being called “lazy, self-entitled, self-obsessed” is a rite of cultural passage. Ask the Boomers who were Hippies how their parents reacted when they wanted to “Tune In, Turn On, Drop Out.”

Okay, now we’re ready for rebuttal. Let’s start with, “There’s no writing.” Setting aside the fact that this is obviously a hyperbolic statement made purely for shock value, let’s dive in. Millennials came of age with the Internet, and the barrier to self-publishing became lower than ever. Millennials were the most tech-savvy generation, the first to lend real legitimacy to online publication. Our LiveJournals and Blogspots became huge media tech companies. Buzzfeed went from a shitposting site of gifsticles to a legitimate source for journalism. More people get their news on the Internet now than from traditional sources. Millennials are no small part of that. In fact, We build and populate online journalism from the ground up, and then we’re the first ones on the chopping block when online media companies merge or fold and make huge layoffs. Nevertheless, Millennials create content — whether you recognize its legitimacy or not. We also created Twitter and Facebook, so that you — Boomers, Gen-Xers, Boom-Xer, whatever — your writing can be shared on a global scale and your opinion piece, however ill-informed and hyperbolic, can reach the widest audience possible. You’re welcome.

Okay, now for the fun one: “None of them read books.” Sure! We’re all under mountains of student debt we accrued from college, during which time we did not read a single book. I’m going to destroy your argument right now: I, Meghan Sara Karre, have, in my lifetime, read a book, fuck you. In the past week, two of my friends have also read books, which come highly recommended to me — Hunger by Roxane Gay and The Seven Husbands of Evelyn Hugo by Taylor Jenkins Reid. Two more Millennials who have read at least one book. Millennials are the generation who first switched to e-readers like Kindle, which of course, get slammed for not being “traditional” books. Most Millennials grew up reading the Harry Potter series (7 books per Millennial!) which also, of course, gets tossed aside because it’s not really reading unless it’s literature. I won’t even get into whether audiobooks count as reading but yeah, most Millennials have at least signed up for a free trial of Audible, so that’s something. Maybe we’d have more time to read books if we weren’t so busy worrying about the downfall of our democracy and working several jobs to afford the basic lifestyle necessities that our parents could afford with a high school diploma? We had to read a lot more books to get a lot less far in life, but sure.

Now, the FUN part — “What is Millennial culture?” Honestly, what isn’t?? The Internet, for one thing, is Millennial culture. Gen Xers may have brought it into our homes, but for Millennials — who, by their very definition, came of age with a personal computer connected to the Internet in our homes — the Internet is a way of life. Facebook, perhaps the most obvious example, was invented by a Millennial but has become widely embraced across generations. That means Boomers, Gen X, and Gen Z (who are, in fact, the “kids these days,” aka, the youngest generation in existence, and guess what? They’re old enough to drink in the US now!) Millennial culture is memes, avocados, and fetishizing our own depression for a laugh. Millennial culture is Lady Gaga and Taylor Swift, Kardashians and Coachella. Our culture exists, whether you like it or not. Literally! (And I do mean, literally). You can objectively prove that Millennials both participate in and actively create culture. We’re fuckin’ 22-38 years old! We’re the young artists who are on pop radio. We’re the movie stars in the summer blockbuster hits. We are, quite literally, at the forefront of the culture. You may not like what we create. You may not understand our memes, you may not know how to use TikTok or Snapchat, and you may fucking hate that Camila Cabello song that plays at the grocery store all the time (believe me, I do too) — but you cannot deny that they exist. They are Millennial culture. Instagram — created by Millennials. Lemonade — Beyoncé is a Millennial. Netflix, pale pink, sarcastic irony, hoodies, reality TV, iPhones, Alexandria Ocasio-Cortez, podcasts, and yes, avocado toast. Culture doesn’t just exist when you decide you approve of it. I would go so far as to say that Millennial culture is the dominant culture right now, just as the Boomer culture was the dominant culture (when you, Bret Easton Ellis, were too young to hitchhike to Woodstock in diapers?).

I’m sorry if this was harsh, Bret. But you had to know it was coming. When you blast Millennials on the Internet, you’re firing shots on our home turf. You had to know your “hot take” would only go viral for being an objectively poor-thought-out and weak one. As a Millennial who has both written (see above, see all this above) and read books, I just disproved your entire inflammatory bad take. And frankly, it was easy, considering Boomers can’t use the Internet because they believe fake news, think Minion memes are funny and their Facebook posts are always in all caps. Good luck proving me wrong without needing a Millennial to show you how to turn on a computer. I hope the flame war doesn’t hit you on your way out the door of cultural relevancy. After all, Millennials perfected the art of Internet trolling.