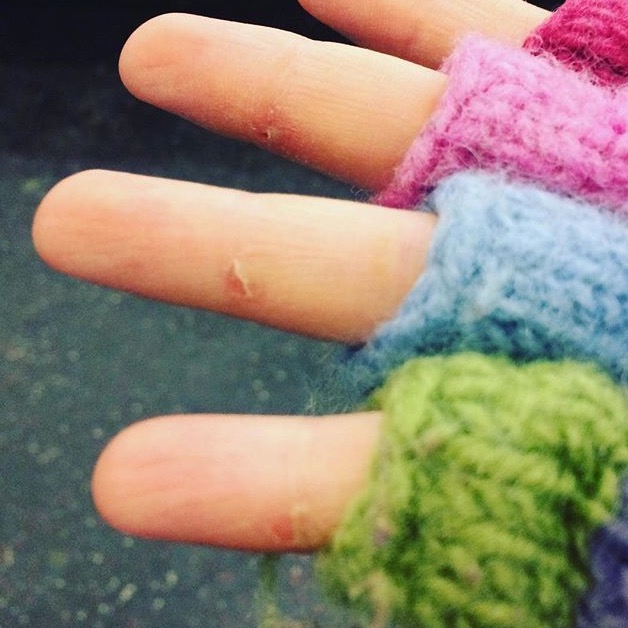 I had an EXHAUSTING day on Friday.

I just wanted to share this with you because it was one of those days that I live for, the days where you work yourself past the point of exhaustion to a state of accomplished *bliss* and everything else melts away.

I don’t talk about my job very much on this blog, because…. frankly… I can’t! Basically, I am a contractor for a studio that makes costume pieces for Broadway shows, among other things. A lot of the work the studio does involves LEDs, 3D printing, and machinery. A lot of the work that I do, personally, is STRUGGLE TO KEEP UP. It’s a HUGE challenge for me. I learn a new technique every day, and I’m always at least *a little bit terrified* every day. I burn my hands, but my hands, and strain my back on a regular basis. It’s HARD work, but —

It makes me SO PROUD. This is the most fulfilling job I’ve ever had. “Job” meaning, something that pays me money, so like, internships and This Blog™ don’t count. I’ve done some WEIRD stuff along the way. I’ve used so many power tools. I’m far from achieving mastery, but I’m proud to say that I’m no longer afraid of the belt sander, I *mostly* understand the Micro Fit stuff, I can cut a tight curve with the hand-held band saw, and the power drill IS MY FRIEEEEEEND! I have learned SO MUCH, and every day when I go home, I feel like the way Bruce Willis movie characters feel when they walk away from a building that’s blowing up behind them. Fucking awesome, badass, and cool.

On the Friday in question, I was at work (more or less, I was also running multiple work errands) for a little over 14 hours.

While I was still getting over the flu.

And I was there so late, that we ordered dinner to the studio. Pad Thai, which I took a couple bites of, and then got back to work. Like I said, it was one of those brutal days that feels good for the soul. I feel like it can be like, running atop a rolling log. Is there a name for that? Sometimes, the hard days make you slip, fall, and the log — the hard day — rolls right over you. But this day was one of those where I stayed on top of the log, and not only was I on top of it, I was like, “HEY, Look at me! I’m amazing!” I mean, I felt like I was really nailing it and I was damn proud.

By the time I left the studio, there was a hip party taking place in the front. I stopped to chat and mingle with the attendees a little. I mean, it was past midnight, and I was exhausted from working all day, but that adrenaline was still going and I was loving it!

I swiped into the subway, just missing a train. Weekend trains run so sporadically, I had over ten minutes to wait for the next one. I sat down on a bench.

I ripped off the lid, unsheathed the chopsticks, leaned over the dish and started shoveling the noodles and tofu into my face. I didn’t realize I was so hungry until I started eating, or, can you call it what civilized people consider “eating?” Noodles smacked my nose, fell off my chin. This was not a pretty sight. Thank goodness I was all alone on the platform!

Or so I thought. There was ONE OTHER PERSON, and this guy decided that, with the entire empty L platform to choose from, he was gonna sit right next to me and blast his headphones out loud. Go ahead, asshole! I laughed in my head. You’re not going to ruin this moment for me! Damn it, I *earned* this Pad Thai! And I could imagine what he was thinking, watching me dive head-first into a takeout container of noodles on the L train platform:

“Ewww! This bitch is fixing to catch everything from bedbugs to botulism, eating food on a subway bench!”

But little did he know, I had not a care to give.

The next morning, my boss asked me if I had finished that Pad Thai from the night before.

“I ate it on the train platform!” I laughed. He laughed.

“And zero fucks were given,” he commented.

“Right. Exactly,” I agreed. “Not a zero fuck was given that day.”