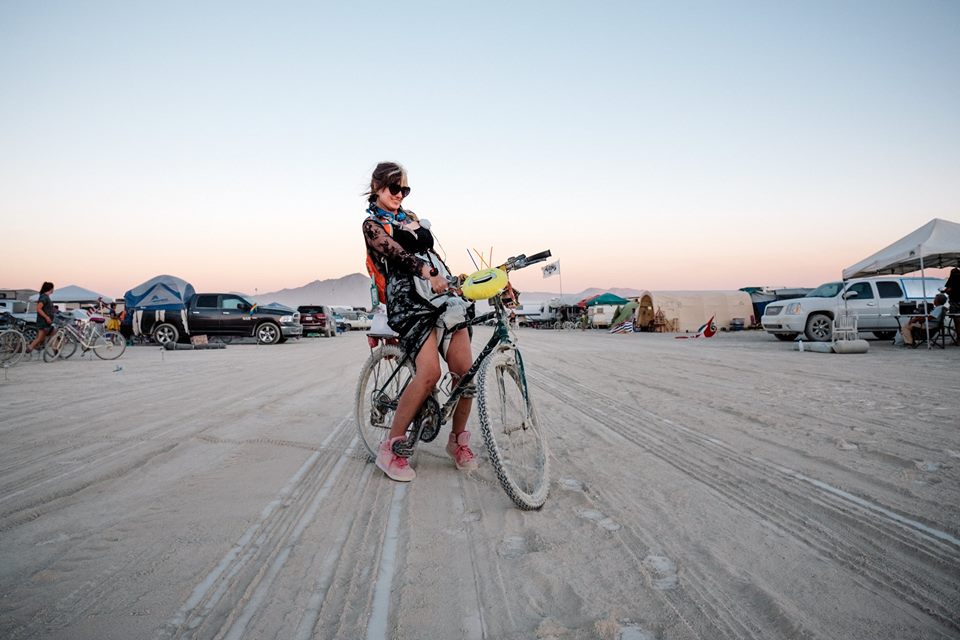 I finally caught the bullet that I dodged last year.

Last year, I was scheduled to get my period at Burning Man, but if you’ll recall (because I know you are so into my menstrual cycle), it came early and was the cherry on top of three days of ??food poisoning?? that basically made Reno a total mess.

This year, I knew it was coming. Waiting to get your period when you have irregular (read: can be anywhere from 32-42 days) cycles is like being a hapless character in a horror movie??? It’s like there’s a horror of pain and bloodshed looming over you, and it can grab hold of you at any moment, but you don’t know EXACTLY when so you’re always expecting it and dreading it. I mean, like, right? Tell me in the comments if that is your experience of menstruating, too.

Well, so, I waited and waited and it didn’t come. Until I finally stopped obsessing over it and stopped carrying Midol and tampons in my bike basket. Don’t get ahead of me!!! And on Monday night, my camp volunteered for a greeting shift.

Now, a little background: before last Burning Man, I researched extensively on BM forums what other menstruating burners have done to cope on the Playa. Everything from the obvious (skip over it by taking hormonal birth control!!! which I am not on, so I can’t do) to the potentially harmful (stuff herbs up your coochie to bring on the blood early!!! which sounds so dangerous and I did not do) to the….WHAT?? (Basically, slam your lower back against a wall until you jiggle your menses loose and it all comes out at once). Yeah, you read that: slam your back on something and it will make your period come. That’s a visual! And it seemed downright absurd, I mean, Right???

Flash back to Monday night. As Greeters, we are expected to 1. Hug people and B. Make them roll in the dirt. I am a soft touch, and when I hugged one newbie and asked them to roll in the dirt, she asked me to join her on the ground and I was like, “SUUUURE!”

And you’ll never believe it, but I swear it’s true:

When I slammed my back down onto the hard-packed playa, I got my period.

I smacked my back and shook my period loose.

I waddled over to my campmate, who was our shift supervisor and told her I needed to bike back to camp for Midol and tampons. She pointed me in the direction of camp, asked me to bring her a beer on my way back, and sent me teetering and bleeding on my way into the darkness.

You guys. Do you even know. What it’s like. To have your period. At Burning Man. During a heat wave.

I mean, at least the cramps were not as bad as they could have been, which, thank Gawd. But in the heat and dehydration of the desert, it was pretty rough. I spent entire days on the couch, unable to move or do much more than spray myself with a water bottle and suck down Camelback after Camelback of water.

But here’s a thing that didn’t occur to me: biking with a tampon in. Reminds me of this Roman tragedy where a woman kills herself by lowering herself onto a sword and stabbing herself to death via the vagina. I mean, it really WAS terrible.

ALSO! Changing a tampon in a Port-O-Potty. I knew this was going to suck, but this year, the Portos were unspeakably horrific. Those little plastic piss prisons were sitting in the sun, just baking. Imagine trying to change your tampon in a turd oven set to 120 degrees Fahrenheit.

But ultimately, you know, getting my period in the midst of this incredibly trying and spiritual vacation was really awesome. When I rode back to the Greeter’s station after stuffing a tamp up my bleeding hole, I watched the moon sink — I watched the moon set! — behind those gorgeous mountains that inspire such awe. I felt so connected to nature, to my womanhood, and to my menstrual cycle.

And ultimately, once I was able to peel myself off that blistering-hot couch, I felt so strong and badass! I mean, how metal was it that in this hostile environment, I was not only capable to survive but to thrive while bleeding in the desert? Getting my period didn’t ruin my burn, I pushed through it, and I still had an amazing time.

And I think the lesson here is that, not only does your period not have to hold you back, it can show you how strong you really are.

And that hitting your back will make your period come?