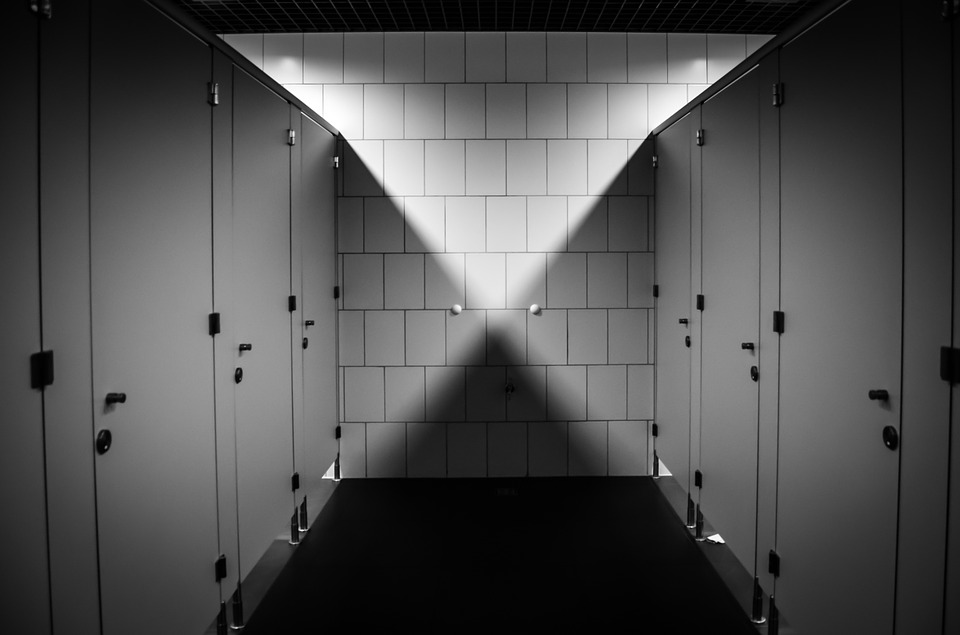 We need to have a talk about potty training.

Not for kids… for adults. For YOU.

I would say, seven times out of ten, I walk into a Manhattan public restroom and find piss everywhere. More than just a few sprinkled. More than the errant drip. Much more than a forgivable “there was no toilet paper and I had to shake myself dry.” This is…. a lot of urine.

This is like, you just drank a Big Gulp and actively tried to piss on every surface in the stall that isn’t the bowl.

HOW ARE YOU DOING THIS, PEOPLE???

It can’t just be tourists, though it seems to be more of an issue in Times Square and near tourist destinations. There’s probably a few New Yorkers in the mix who seem to think that hovering is acceptable.

And I get it! I hovered once.

Picture this: it was a public park bathroom in Battery Park (near the Statue of Liberty ferry, so, lots of tourists). There’s an inch of water (water/pee?) on the floor, and I’m wearing a parka and carrying a purse. While hovering, tip-toed, and holding my purse on my lap, I had to change an o.b. tampon without making contact with the seat because it was COVERED in human excrement.

That was the ONE TIME I hovered. The rest of the time, YOU SIT ON THE SEAT.

That’s why a toilet has A SEAT.

It’s called A SEAT for a reason.

To recap: YOU SIT unless the seat is smeared in feces, the bathroom is 20 degrees Fahrenheit and flooded with water and piss, and you’re bleeding through your tampon. If all of those criteria are not met, JUST FUCKING SIT.

Okay, I get it. You see a dry toilet seat in a well-maintained restroom with an attendant actively cleaning and you’re still skeptical. You think, “Maybe there’s germs there! If I sit my butt down, I might get germs on the upper back of my thighs!”

Well let me pull out my exceedingly tiny violin and play you a ballad of GET THE FUCK OVER YOURSELF. Germs are goddamn everywhere. Who cares if you get imaginary, harmless germs on your butt? It’s your BUTT. Unless you’re about to head to a Naked Sushi event where kinky businessmen are going to eat raw salmon off your bare ass, WHO CARES IF YOU GET GERMS ON YOUR BUTT?!?! I see you hovering over the seat afraid of invisible butt-germs one minute, then the next you hop on an A train and lean your face against the pole?!?! Are you fucking kidding? No, you’re a full-blooded hypocrite.

You know what they say, and it’s my motto for life:

“HOVERING CREATES THE SITUATION YOU ARE TRYING TO AVOID.”

So while you are in the stall, with your palms to the wall, swiveling your fanny all around like You Might Be A 90’s Kid and “Hips Don’t Lie” by Shakira just came on, you may not be thinking about Society At Large. But you should know that the next person who needs to use that stall is going to walk into a Nightmare Scenario. And you know what? That’s rude. So the next time you decide to clean a public restroom with your Golden Shower, Miss I. P. Freely, think about how you would feel if you walked into that crime scene.

Do you know what the Port-a-Potties at Burning Man are like?

Nine days in the desert, constant intoxication, once-a-day cleaning, tens of thousands of people of all ages and genders using the same glorified hole in the ground for all of their bodily excrements?

Do you know what the Port-a-Potties at Burning Man are like?

Go ahead and ask me.

“Meghan, how are the Port-a-Potties at Burning Man cleaner, on average, than the well-maintained indoor toilets at the Port Authority Bus Terminal?”

Ok, I have two theories.

One, is that for nine days in the desert, those Port-a-Potties are your “home” toilets. No matter where you live in Black Rock City, there’s an outpost of Port-a-Potties marked by blue lights that are the toilets closest to your camp. Think about the toilet in your apartment – if that’s the toilet that you use several times a day, it’s in your best interest to keep it as clean as possible every time you use it, because you’re gonna be back again later, and you hope to find a clean toilet when you do! So that’s one theory. Selfish self-interest.

The other theory, and I like to believe this is the real answer, is that we just care more out there. In a city of only 70,000, we know our neighbors and we care about them. We care about them not sitting down blindly in the middle of the night onto a toilet seat that we have liberally doused in our piss. Do unto others, if you will. Most of the time, there’s a line at those Port-a-Potties, and when you open the door after doing your dirty deeds, you’re gonna look into the eyes of the person who’s using that stall after you. You’ve gotta be able to meet that human’s gaze with the full confidence that you aren’t about to ruin their day by Welcoming them to a Wee-wee Wonderland.

So, what’s the solution for public restrooms?

Potty train according to the new “Golden Rule”: “Doo-doo unto others as you would have them doo-doo unto you”? Or how about the classic, “If you sprinkle when you tinkle…” Guys, life hard enough without having to worry about marinating in strange pee when you’re relieving yourself? As the inside of a Port-A-Potty at Burning Man once informed me:

HOVERING CREATES THE SITUATION YOU ARE TRYING TO AVOID.

Suck it up, take a seat, and remember your training.

image via Jarmoluk on Pixabay