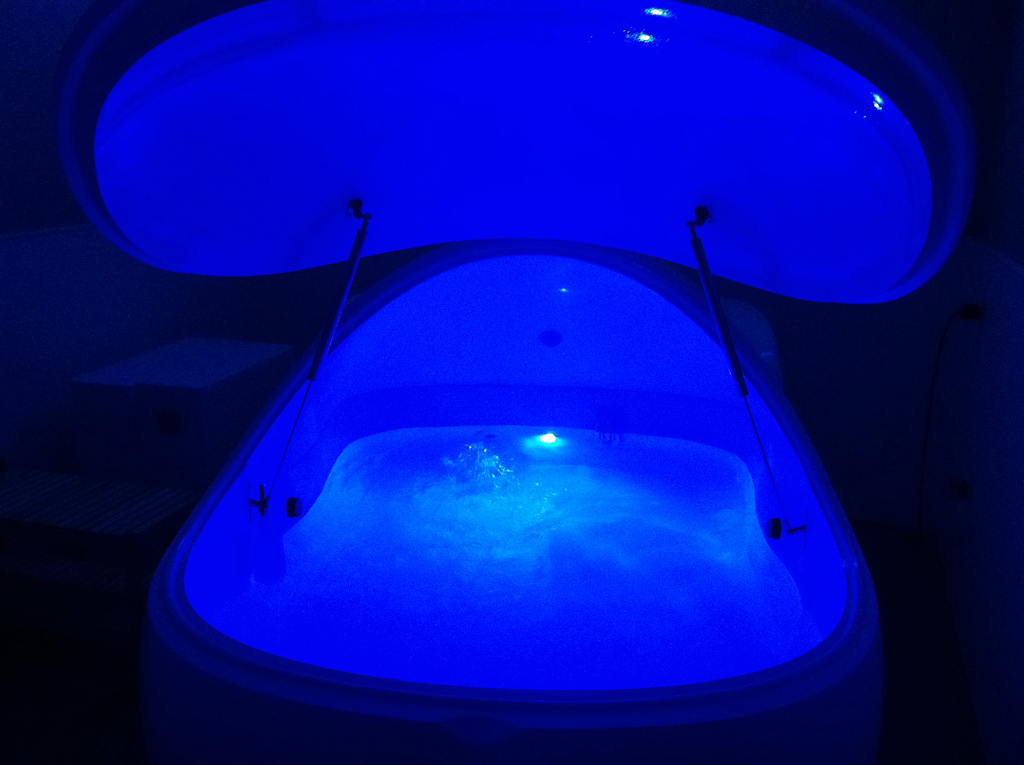 It’s the day after my float, and I want to write down everything while I still have a thin crust of salt in my forearm hairs.

So I want it on record that *I* was the one who had this wacky idea in the first place. It was at a health foods store in California where my boyfriend and I stopped to get date shakes and gluten-free veggie wraps, seated outside near a fountain, when I saw a brochure for floating.

“I’ve always wanted to try this,” I told him, brandishing the brochure. “Well, I like baths, you know, I find them very calming.”

AND NOW I KNOW THAT FLOAT TANKS ARE NOT AT ALL LIKE BATHS.

The sensation of floating is actually WAY MORE LIKE laying gingerly down upon a beanbag chair. Or trying to take a nap atop a king-bed-sized Jell-O Jiggler. I just laid down, took a deep breath, relaxed all my muscles, cleared my mind, and floated.

We were running late through the rain to our 2pm appointment at Lift Next Level Floats in Cobble Hill and being late stresses me out. Anything later than half an hour early is LATE. To be fair, it was my fault because I’d left my MetroCard in my tour bag from the night before and we had to run back to get it, so I was like… HURRY UP WE GOTTA RELAX LETS GOOOOO! We signed a disconcertingly detailed waiver, watched a five-minute tutorial video, then we were led to our rooms, and that was it. 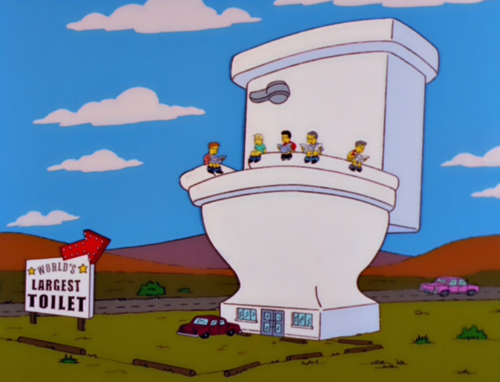 I was ushered to Room 1. Inside my room was a pod that looked like a very modern toilet had mated with Little Shop of Horrors’ Audrey II. I MEAN, it looks like a giant fancy toilet. I literally stood in the doorway there like ummmmmmm…. you’re leaving me alone with this thing?!?!? Until I realized I’d better shut (and lock) my door, strip down, and shower off. I shampooed and loosely braided my hair to keep it under control, then I stepped into the tank.

HOLY FUCK, IT BURNED. I quickly realized everything the tutorial said about putting the provided salve on cuts or bruises was REAL TALK. I have exceedingly dry skin, and every surface that the water touched was on FIRE for like a few seconds. Then I got used to it. Then I got water up my cunt, and I thought I was going to DIIIIIIE. Honestly, I’ve never had a yeast infection (I know lucky right?) but I imagine this is what it must feel like? My whole vagina was itching and burning inside of my body like a tampon made out of fire ants. I wish I could say that THIS sensation went away after a few seconds but I more or less had Flamin’ Poontang for the entirety of my float. So if you’re contemplating a bathing suit while you float (they discourage it because it takes away from the experience), might I recommend one that will keep the salt water out of your Tunnel of Love?

OH speaking of trying to keep water out of your HOLES, the video also recommended using these wax discs as ear plugs. I’ve seen foam ear cone plugs before, but this waxy stuff looked horrible to me so when I laid down for the first time, I went without….

…then sat right back up, dried off, and went for the wax. Now you know I have that daith piercing that makes it impossible for me to wear ear buds in my left ear? I ran into a lot of problems with this. I am putting this in bold because I wish somebody had warned me about the ear thing before I went to float. I would have brought my own comfortable ear plugs rather than try to make it work with half of the wax in each ear, and having the weird sensation of my ear-dams being breached with a THWOK-POP every time the waters lapped around my ears. Maybe I could’ve used some up that wax to plug up my cooter JUST KIDDING I WOULDN’T DO THAT but it doesn’t seem like a bad idea when you’re actually experiencing it.

So now, we try to float. It’s harder than it sounds, honestly. I refer you to the Jell-O metaphor again. You’re trying to balance on top of something that is NOT SOLID. It’s kind of hard! Luckily, my arms were long enough to hold onto the hinges on the sides of the tank while I found my center of gravity (anti-gravity?) and felt ready to let go. I’ve never learned to swim, so I wonder if maybe it would have been easier to float if I had more “trust” in the water? But I remind you that this is nothing like being In Water. It’s like being on TOP of water. Like a water bed? A jacuzzi this ain’t.

So now I’m floating. My first thoughts are, “HEY! I’M FLOATING!” I can’t believe I’m actually able to do this! I didn’t close the lid (I got scared) and I left the music and lights on in the tank. I guess that defeats the point of “sensory deprivation,” but it was really hard to just PLUNGE myself into a state of relaxation. I actually talked aloud to myself for a few minutes at the beginning: “You’re fine. This is fine. This is nice!” before I felt comfortable in the relative-silence of the New Age music.

Then it was just me. Alone. Naked. For an hour.

This daunting realization prompted my next thoughts which were basically, “What witty things am I going to say about this experience?” ?Yeah, I know. I am rolling my eyes at myself.?  Here I had the privilege of enjoying this unique experience, and my first inclination was to distance myself from it with humor. At first, all these thoughts piled up, dueling with each other, and I started to worry that I’d better get on with relaxing. I tried to take deep breaths. I tried to stretch myself out.

But what I quickly learned is: You can’t FORCE YOURSELF TO RELAX. It just kind of happens when you stop trying. And it did! After some time had passed, I found myself entering the state of am-I-or-am-I-not-asleep that I felt in the sound bath at the Integratron, or that I often experience at No Lights, No Lycra. If a thought occurred to me, it was approached calmly and alone. I acknowledged it, and then it went away. It was really amazing. I lost sense of depth perception, too: sometimes I’d close my eyes and open them to find the lid of my tank RIGHT ABOVE MY FACE, other times, it felt like it was flying so far over my head. It was beautiful. I mean, how do you describe the sense of sense deprivation? Nothingness? It was a complete surrender of control, and it actually felt amazing.

Soon, too soon, the music shut off. A calm voice came through the speakers, telling me that my time was up. I showered off and am pleased to report that my main concern —SALT IN MY HAIR! — was unfounded. The salt didn’t seem to mess with my very dry, bleach-damaged hair at all, but just in case, I combed a hefty supply of leave-in through, root to tip. I had a harder time getting the salt off my body – next time, I would use the face towel they provided as a wash-cloth, because I still feel a little gritty now (the morning after).

So. Was my sensory deprivation float tank experience relaxing? Ultimately: yes. I feel like my emotional state has been reset, and I’ve been given a clean slate. I feel less inclined to distracting myself with stimulus like my phone and The Internet, and I feel like it’s easier for me to find a place of “stillness” in everyday moments. My body feels relaxed. My mind feels clean. I would encourage everyone to try this at least once in their lifetime, in fact, the sooner, the better. I can almost personally guarantee you that you will enjoy it, and leave feeling more serene and content. AND that it will feel like you’ve been fucked raw by an Utz pretzel rod.