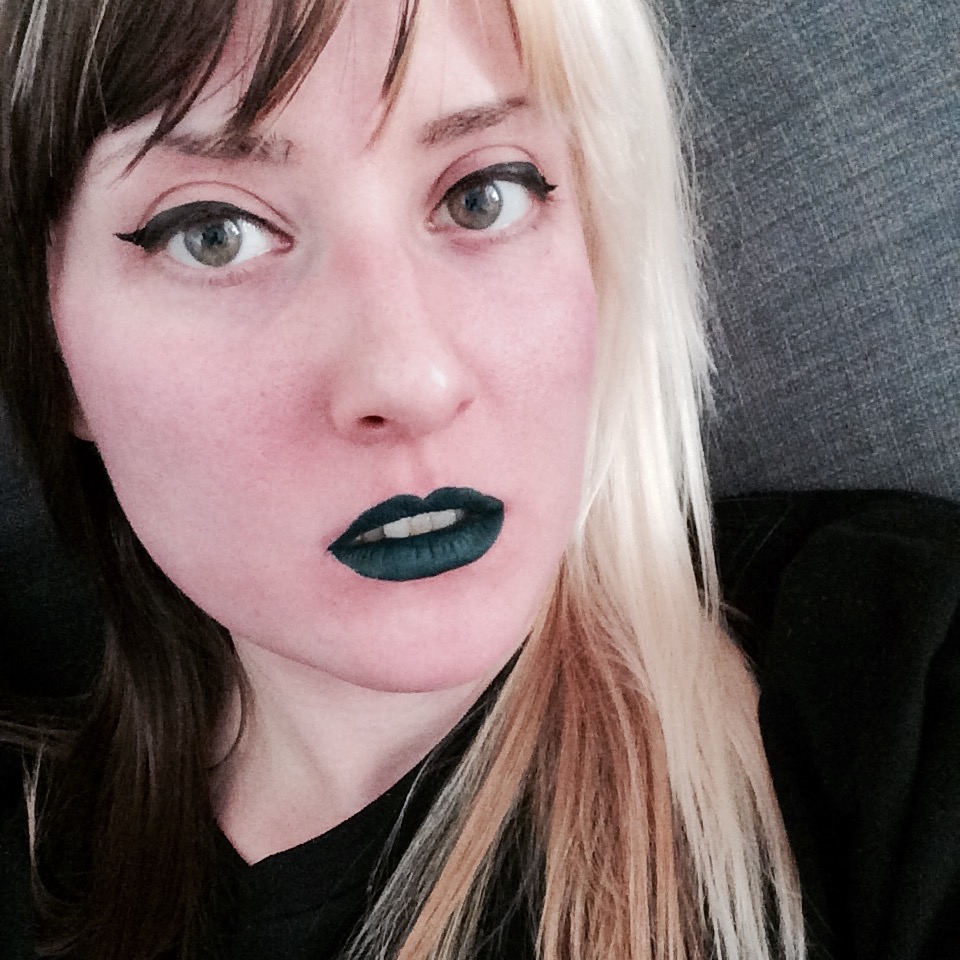 Happy Friday, everybody! I’m especially excited for THIS WEEKEND because my boyfriend has promised to help me update my phone to the latest iOS! My phone is still on iOS 7.something, because I’m terrified of updating it. This is where my beloved pops his head in and says “THAT’S BECAUSE YOU HATE CHAAAAANGE!” Yes, that’s certainly a small part of it. Mostly though, I think I’m scarred because the last time I updated an iPhone’s iOS was to block a telephone number, and it was while I was still recovering from Valentine’s Day 2014, and my phone DIED and dumped all my contacts and photos in the process. So there I am, shitting profusely and crying that I’d lost all my pictures of Charlie. They came back eventually, but it was a stressful and fragile time. You understand my reticence, now. I’m hopeful that won’t happen this time, but we’re going to do a lot of backing up — just in case.

Oh and how much do you love my green lipstick?!? I have been “testing” it at Sephora to kill time before therapy appointments for a looong time, and I bought it the other day and it makes me feel so powerful! You might also notice in that picture that I’ve started the laborious and tedious process of expanding the “blonde section” of my hair. You can see that there’s a section in the back that’s light brownish, that underwent the “first lift” of bleaching this week! I’m nervous but excited, but I dared to do it myself after feeling really accomplished and capable at the studio all week. I can’t wait until the process is finished, but I’m taking it slow to avoid damage.

Also FYI I’m on the hormonal down-swing towards PMS so I’m terribly, terribly tired. I was blaming my inability to stay awake yesterday afternoon on the Women’s March I attended with my friend on Wednesday, since it was a really long (but really fun!) march, quite full of chants, but I think ultimately it’s PMS. Download a period tracking app, seriously! It will make your life so much better! I guess that’s another post for another time…

Why is Houston Street in NYC not pronounced like “Houston,” the Texas city? Well, if you’re not from New York, you probably read both of those words the same in your head. My BF posed this question to me before I read the article and I guessed correctly. If you want to know, this NYT article will tell you!

All week long, I had Prince’s “Raspberry Beret” stuck in my head, and then I looked up the song on Wikipedia and it turns out Prince himself played cello on the song’s recording? This excites me.

So this week was International Women’s Day, and HOWIBOW DAH. I shared an article on Facebook about the CASH ME OUSSIDE girl, and I thought it was a really good article specifically about the experience of white girls. A friend countered by sharing this article, about racist double standards for white “unruly” girls and young WOC. I also, coincidentally, read a great Medium piece about Dr. Monique Morris’ work and her book, Pushout. This was a thorny experience for me, because I appreciate being called out on my privilege, but I also don’t want to deny the truth of anyone’s existence in the process. I dunno, I’m a bit confused. I guess I feel like in some ways, there are many issues here, and I may have gotten derailed by playing the “who has it worse” game, but I also know from seeing it firsthand that there is a massive racist double-standard at play for girls. I’d love thoughtful, respectful comments and I urge everyone to read Pushout. Seriously.

I’ve loved this Twitter account for a long time, but for International Women’s Day, their tweets was ON FIRE.

I’m a big fan of Mental Floss (thanks to my mom, who suggested I follow them!)

I don't need femimssm, a day for women?? What next, a WEEK? A MONTH? Women being respected and appreciated EVERY day?? #scare #slipperyslope

Woman Against Feminism is an AMAZING parody account, they don’t tweet often, but when they do, HOLY CRAP, it’s hilarious. Give them a follow & read through, it’s consistently fabulous.

I was never on Tinder (OkCupid was my jam though!), so I missed out on fabulous profiles like THIS. Guess I’ll never find “Jesus,” alas:

THE FAKE NEWS MEDIA IS NOT *MY* ENEMY! #presidentsupervillain pic.twitter.com/EgM2k45HZS

Well, it’s snowing out now, so I have to go sit by the window and try to get a good shot for Snapchat. Have a great weekend and stay warm, everyone!!!