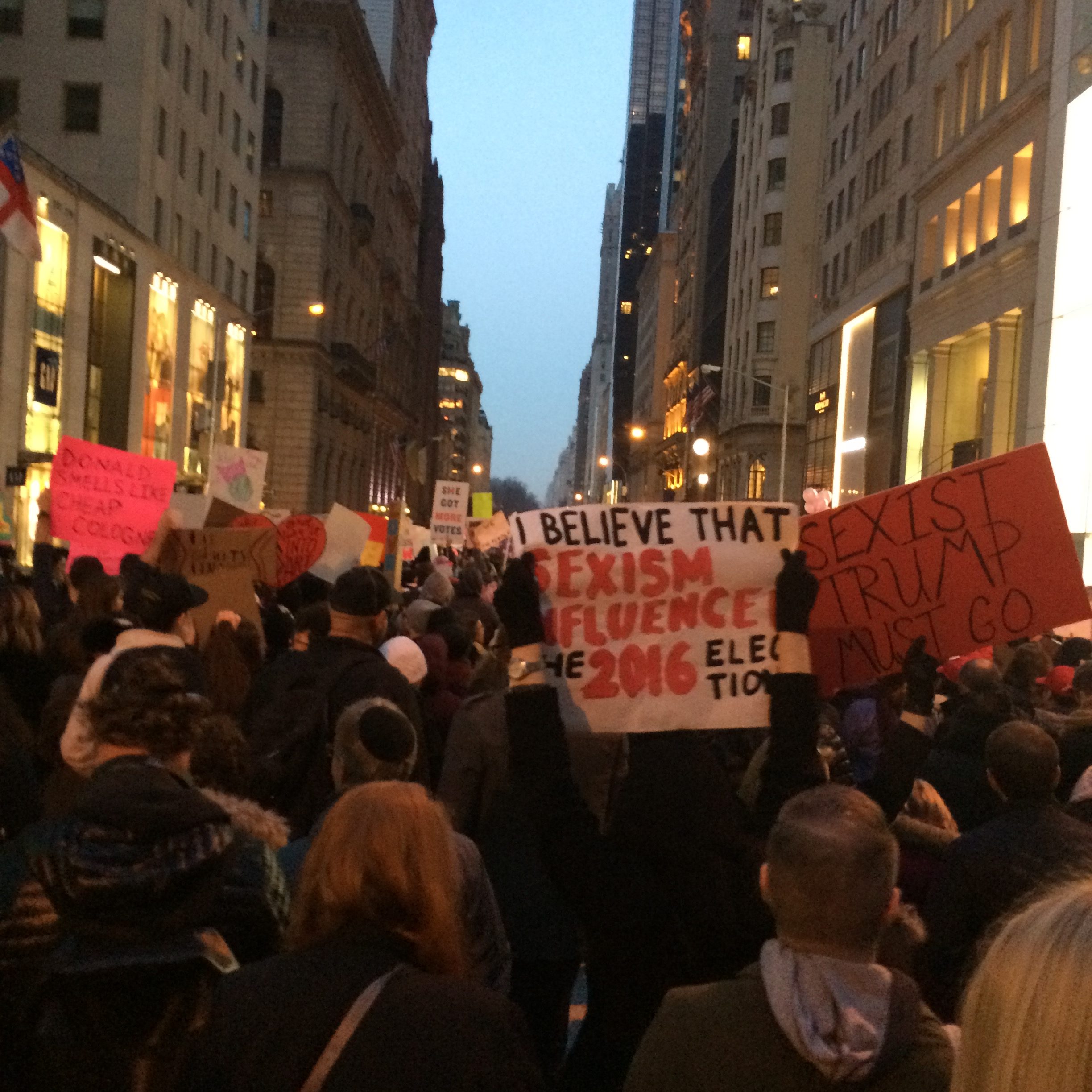 Ok, so I didn’t go enthusiastically. Not at first.

My fear and distrust of the general public has increased 1000% after the election. I know that My Liberal Bubble is a relatively safe and progressive place to live, but since November 9th, I can’t help but eye every cis white man with a little bit of fear and suspicion now. Like I’m surrounded by irrational people with zero respect for human life, whose capacity for horrifying acts can not be underestimated. Kind of makes going out in public seem less fun, huh?

So why invite that conflict? I thought, this is a fine thing for other people to do, and I support it, but I’m afraid. I’m probably not the only person who was more than a little afraid.

I forced myself to make plans because, to be blunt, I realized I couldn’t be more afraid. I’m already afraid of so much in this fucking regime: losing my healthcare, going to war, being attacked by misogynists, losing my job, being forced from my home, being persecuted for my beliefs — the fabric of my entire existence has been slowly disintegrating before my eyes for the past two and a half months. And now I was also afraid to protest it? Enough. I had nothing to lose. In my mind, I’m already undone. What more can possibly be taken from me? Let’s march.

There is SO MUCH woman-power on my Instagram feed – 💓 I was reluctant to march but now I'm so excited!!! 😍🔥💁

The morning of the event, after plans had been made to attend at the proper time slot, I started to see images of the marchers all around the world pop up in my social media feeds. Online social media is a comfortable place for me, but it’s obviously not the same as ACTUALLY showing up and doing something. It finally occurred to me that I would regret it for a long time if I sat this one out. So I donned my Femnasty sweatshirt and my cat-ears hat and my friends and I slid into the march at 45th Street. 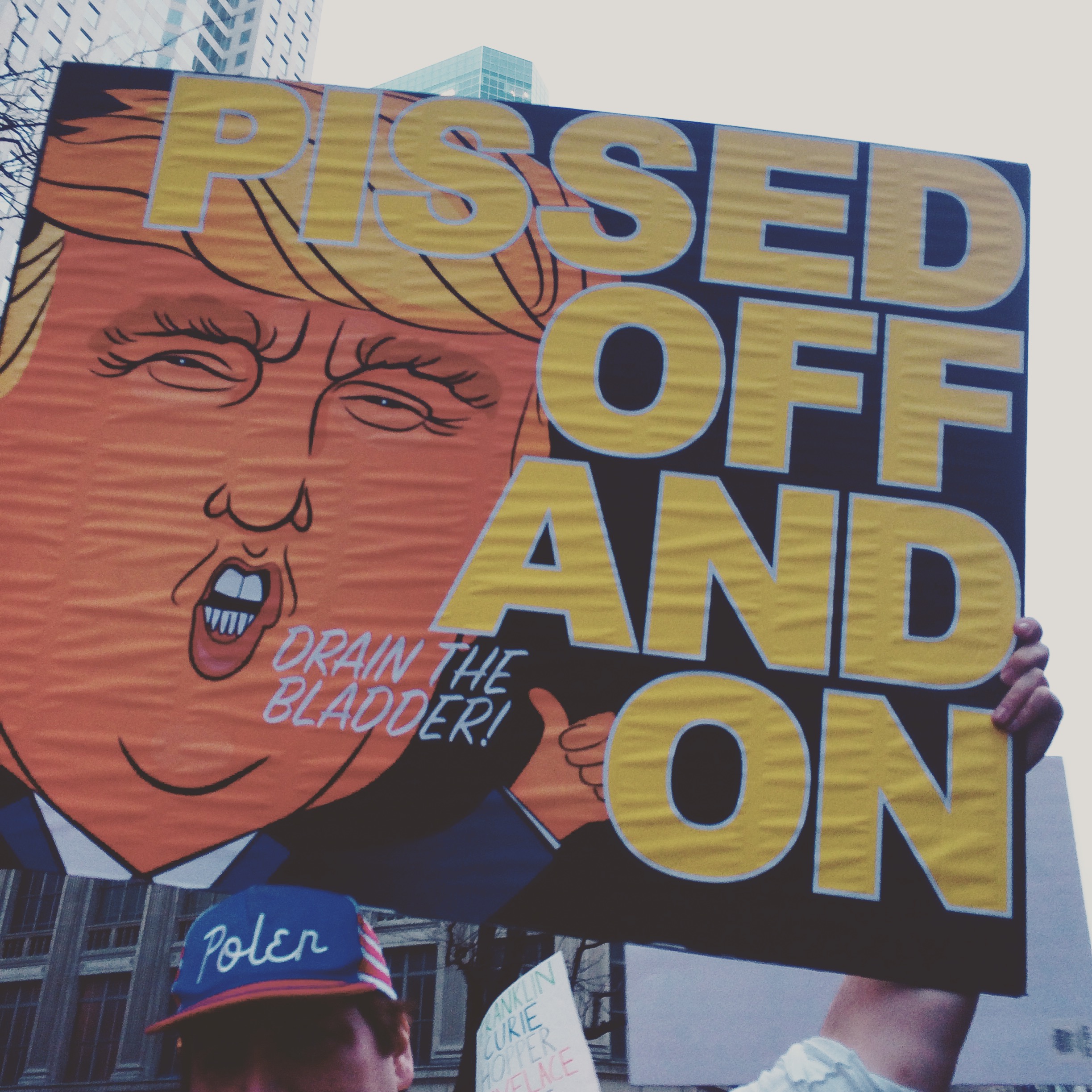 On Friday, I broke down. I was physically ill. I begged a hug of my boyfriend because I didn’t think I would feel so sad. I felt like I was suffering completely alone. I used my therapy app, but it didn’t help (in fact, I charted my distress as going UP from an 8 to a 9!). I wanted to shut down and block out everything. Denial! It’s totally healthy!

It turns out the OPPOSITE — joining in — was the real cure.

“WE ARE THE POPULAR VOTE!”

We shouted down Fifth Avenue, clapping and whooping. Yes, we are! I realized that I wasn’t alone after all. Damn it, this is what Democracy looks like! It’s not hard or scary, it’s GOOD. When the men around me chanted “HER BODY, HER CHOICE!” I raised my voice with the ladies’ in response: MY BODY, MY CHOICE! It felt….AMAZING! Amazing to be validated by real life humans! It’s gonna sound corny but: it was like Twitter in real life! All these other people all around me, warm bodies trudging slowly up to Trump Tower, all for the same cause. YES! 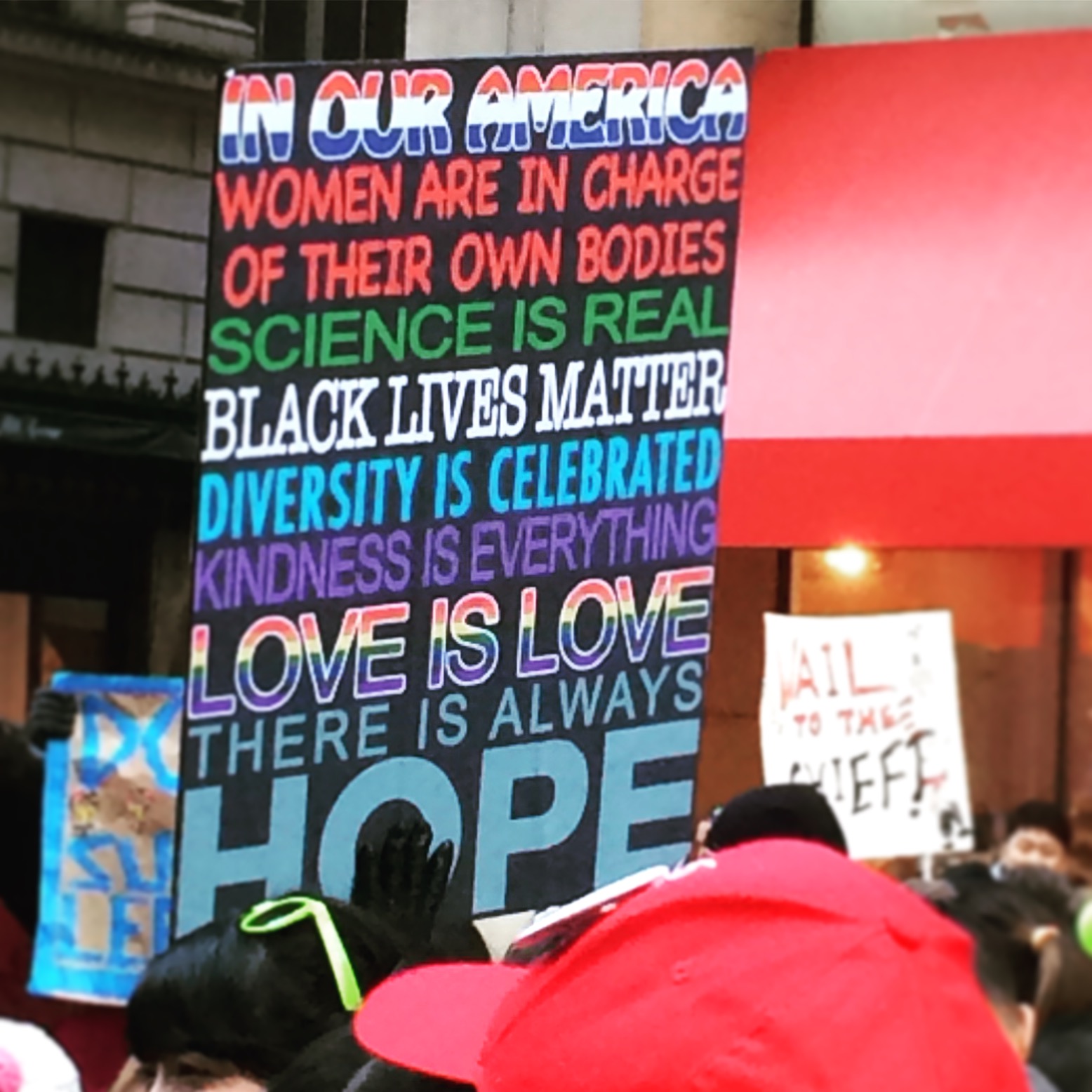 I think of all the signs, this one was my favorite. This sign beautifully and eloquently stated what I have wanted to say about America since the election. Damn, I’m glad I went to the Women’s March. We’re not suffering alone. There are hundreds of thousands of us (just out of frame) all committed to resisting. Next time, I’ll turn up. I’ll bring a sign. Maybe a cowbell. I’ll keep doing this as often as it takes.