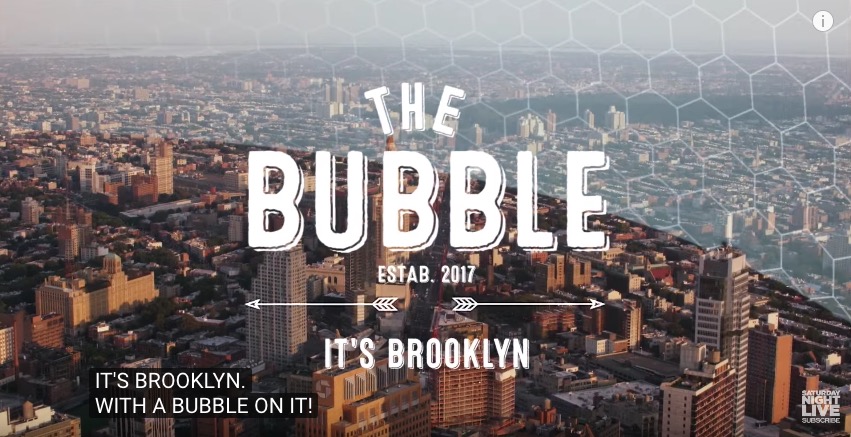 I wanted to be “over it,” but I’m not “over it.” As much as it pains me to accept the comparison, I — much like the Pubescent-Elect — am upset over an SNL skit.

First, you have to watch the video. Watch it aaaaaaaall the way to the end. That last joke! The one at Brooklyn’s expense? That’s the part I’m annoyed about.

First of all, what is this, 2008? Are we still making jokes about Brooklyn being so full of rich hipsters with beards eating artisinal foods OMG? Because… have you been to Brooklyn? No, Saturday Night Live is based out of Manhattan, it’s inconceivable to think that any of the actors, writers, or crew members who work on the show have ever taken the subway below Canal Street. Oh gosh! Does the subway even GO below Canal Street? OMG. I guess maybe someone on the writing staff called up Lena Dunham and asked, “What’s Brooklyn like?” And because she had brunch once on Bedford Avenue, she gave them the thumbs up to make this joke.

Let me tell you, if you’ve ever stayed on the L train past the first two stops, BROOKLYN IS NOT ALL LIKE THAT. That would be as reductive as saying that Greenwich Village is probably the same as Times Square, even though you’ve never set foot outside the Port Authority Bus Station. You may say I’m being petty about this “joke?” I don’t see it that way. I think it’s fair for me to be justifiably angry that someone whitewashed my hometown. Unfair that someone judged a book by it’s cover. Especially when that book is RIGHT ACROSS THE EAST RIVER FROM YOU HELLO. But yeah, take an Uber Black here on the weekends for ramen burgers and then shit all over how pretentious we are, SNL writers. Get. A. Fucking. Clue.

Write this down: Brooklyn is NOT Williamsburg. If the boroughs of NYC were considered cities of their own right, Brooklyn would be the third most populous city in the country (behind LA and Chicago). According to Wikipedia, as of 2010, only 54% of Brooklynites aged 5 and older speak English as their primary language at home. Have you been to Sunnyside? Brownsville? Crown Heights? Have you been anywhere besides Smorgasburg? If so, you might have noticed that Brooklyn isn’t the punchline that network TV wants to turn it into. But please, tell us about that time you rode the F train all the way from 14th Street to Coney Island for the Mermaid Parade. Yeah, I’m sure you got the gist of Brooklyn then, uh huh.

If you’re going to make a joke about Brooklyn, hah, make your joke about Williamsburg. Sure! The gentrified, overpriced, ridiculous area of town is surely the epicenter of this horrifying “liberal elite menace”…or at least they seem an easy target for it, until you look at the actual facts, and find out that Williamsburg was one of the neighborhoods in Brooklyn that voted overwhelmingly for Trump.

Hey, I get it. SNL has to ride the wave of what’s popular! Right now, kicking people while they’re down is so trendy, we hipsters in Brooklyn were doing it before it was cooool. We know that SNL liked to pretend they had teeth and make fun of Dumpty Truck while he was making an ass of himself, but now that he’s won, SNL (along with the rest of the media) are lining up to lick his gloating asshole. Look at People magazine! And let’s not forget, sucking Drumpf’s tacky golden teat was a thing SNL already did. If this isn’t already burned into your memory forever, do yourself a favor and treat yourself (and skip forward to 1:33 for some niiiice nightmare fuel):

How much do I love the irony of our future Cuntgrabber-in-Chief playing a “tax guy” in this video, when we know for a fact that he doesn’t even pay taxes? HILARIOUS! Oh, SNL, you really have your finger on the pulse of what’s cutting edge and funny!

I know I recently took to Femnasty to praise SNL for putting women to the front, but to me, making fun of your home base feels like a huge step back. SNL is one of New York’s points of pride. If you’re going to make fun of Brooklyn, fuckin’ do it RIGHT, or as the sign marking your exit from our great borough says: “Fuhgeddaboudit!”