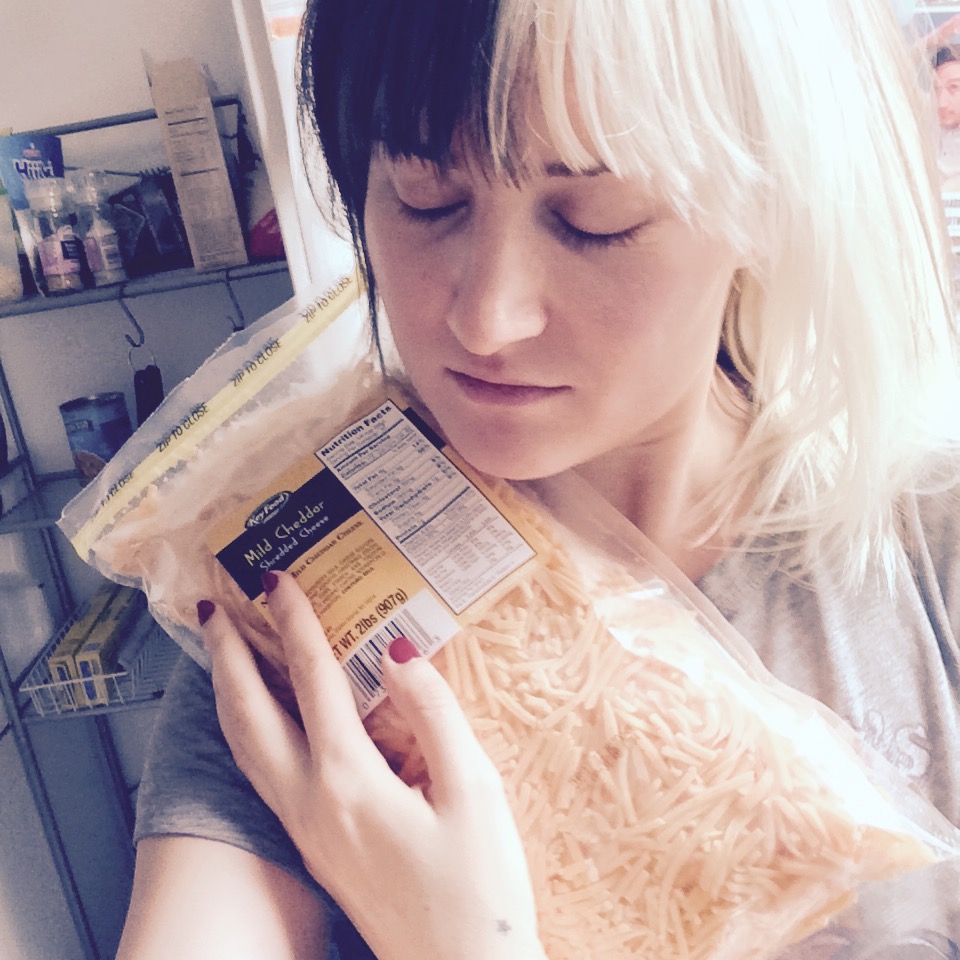 I don’t say this often, at least, not as much as I should (I know), but dammit, I love… cheese.

Invariably, small talk always leads to the “Would You Rather” question which I used to stumble over: “Would you rather live without chocolate, or cheese?” I mean, would I want to live in a world where I would be forced to choose? A Younger Me wouldn’t have hesitated before declaring my allegiance to Chocolate. But let’s just look at the facts:

When I was an acne-stricken teen, I was told that soda was to blame for my pimples. I stopped drinking soda pretty much altogether that day. I was also told that chocolate might cause breakouts, and similarly cut back on the brown stuff. Later, I was informed that cheese and dairy were the real causes of hormonal acne, whereupon I decided that cutting foods out of my diet was dumb, and I’d rather be spotty and live a happy life than have clear skin and be miserable without cheese.

Cheese makes everything sublime. I am guilty of putting cheese on vegetables! A little parmesan on some corn. In my youth, broccoli would only be consumed with a thick sauce of Velveeta over the top. Yeah, I know that Velveeta isn’t really cheese, but y’know, Younger Me didn’t care. Younger Me picked chocolate over cheese! Younger Me had a lot to learn.

I’ve never — never — met a cheese I didn’t like. That is simply a fact. There are certainly some cheeses I prefer! I am still haunted by the cheese in the ubiquitous baguette sandwiches I ate all over Paris six years ago. If I’m tasked with cutting up cheese, an estimated 40% of said cheese is going directly into my mouth. I will do ridiculous things for cheese. Flirt with the store employee handing out free samples of cubed cheese. I mean, I’m not above debasing myself. I’ve never had any interest in attending an orgy, but if you told me there would be fondue there, I’d probably go…just for the hot, melty cheese action.

Cheese is a staple. Nay, a requirement! I’ve recently realized that it’s actually more cost-effective for me to buy my shredded cheese (or “sprinkle cheese,” so called because you reach into the bag and “sprinkle” it on whatever you’re eating) in mass quantities. Picture it: The shredded cheese area of your local grocery store. Hung on disciplined racks are bags of shredded cheese of all brands and flavors. Now look down. Down, down, down. At the bottom, you’re liable to spy huge bags of pre-shredded, generic, store-brand cheese. Yep, the size of a human child. THAT’S THE CHEESE I BUY. Scoop it up, hoist it over my shoulder, give it a piggy-back ride home.

“Dear God, Meghan!” you exclaim in horror — as well you should! “What do you need with all that cheese?” Well, between quesadillas, taco fillings, and gracing the top of a bowl of chili, it turns out I eat a lot of cheese. And that’s not even counting the cheese I eat straight from the bag. OHHH YEAH. Anytime I want, I just go into the fridge, unzip the resealable bag, grab a pinch of cheese, tilt my head back, and sprinkle that dairy goodness right into my mouth. I’m an adult! Actually, I’m an adult who has had the problem of cheese missing my mouth, falling back into my hair, or sometimes, collecting inside the hood of the sweatshirt I’m wearing. Such is the life of a lover of cheese!

I guess what I’m trying to say is, I really like cheese. I even get excited when I see other people enjoying cheese. HELLO, CHEESE FRIEND! I SEE YOU ALSO ENJOY CHEESE! HOPE YOU HAVE A FUN CHEESE! I would say to them, if I wasn’t paralyzed by this terrible introversion. Which is fine by me. I’m perfectly content to keep to myself. More cheese for me.