Dermatological treatment may be slowly changing my face, but it’s rapidly changing the way I think about it. 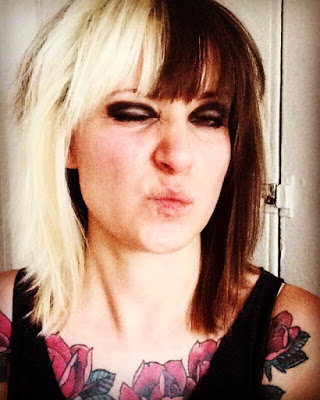 It’s been almost six months — wow, time flies! Six months since I brought my shameful face to the dermatologist. In the sixth months I’ve been using prescription topical treatments, my face has gone through SO MANY CHANGES.
I mean, you think it’ll be slow progress. You’ll be WRONG WRONG WRONG!
There are days when your face dries COMPLETELY out. Sometimes, I can feel it cracking when I smile. Sometimes, by the end of the day, it’s flaking off all around my chin. I can’t feel it, but it’s like I’m wearing a beard of dandruff.
And then there’s the PTSD: when I wake up in the morning clammy and nervous, certain that there’s a throbbing, juicy whitehead somewhere on my face. I’ll stand in front of the mirror and poke my skin until I’m convinced that it was just a nightmare.
And then you wake up, out of nowhere, with your entire chin swollen, red, and hard.
You’d think I’d be crushed at this, hurtling back in time to when a zit like that would keep me locked indoors for weeks until it healed, finding excuses to stay inside like the Hunchback of Notre Dame.
This morning, I felt oddly at peace with the abomination forming on my chin. My old thoughts would have been of self-hatred and self-blame, as if I had done something horrible to deserve this. Karmic pimples. “I was rude to a stranger,” “I snapped at my boyfriend,” “I ate all that cheese,” “I spent too much time in the sun.” Ask my therapist: I’ve spent entire sessions wailing about how my face is the outward presentation of the damaged and unworthy human being I am. My face is the curse that keeps me permanently humble and downtrodden.
Then, the primary concern is concealment: nobody must know. I have to hide this somehow and make everyone believe I’m normal!

I no longer feel like breakouts are somehow my fault. I’ve been able to realize that they’re out of my control. No more mythologizing, no more self-castigation.

At the beginning of this journey, I had an “all-or-nothing” vision of success: either my skin would become flawless, or it would not. The bizarre stops along the way to healing (hello, can we revisit the dandruff beard?!) had led me to a different realization: the perfection I craved for myself was impossible to attain. I have to relinquish any illusion of control over my skin, because it’s not up to me. It’s not my fault, it never was. Do I regret all those years of not seeing a doctor? Yes — because this realization is more valuable than clear skin: I cannot hate myself for things I have no control over. So that’s that. Dermatology updates, over and out.