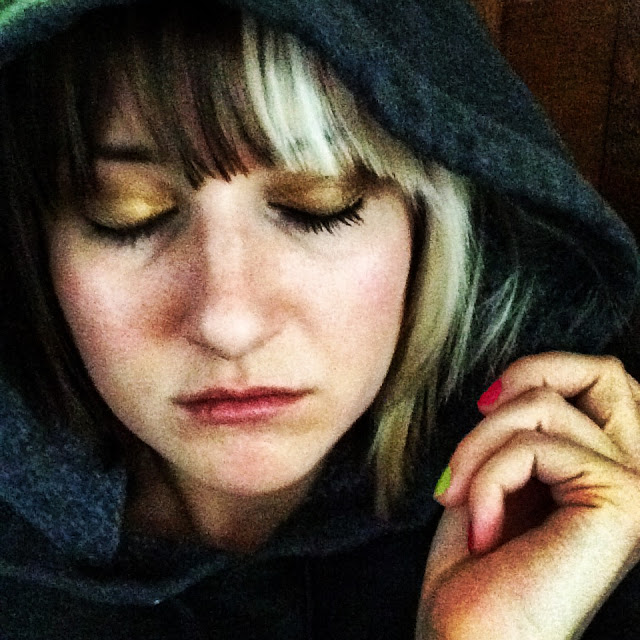 You know what’s awesome?  Having the kind of terrible menstrual cramps that ruin your entire day (and sometimes the next one, too).  The kind where taking Midol is a gamble: sometimes it works, sometimes you might as well swallow some Cadbury Mini Eggs and hope for the best.

That was me yesterday.  I had big plans to go museum-hopping with a friend I hadn’t seen in too long, and after getting all dressed and ready, started getting stabby, burning cramps.  Eyes watering uncontrollably.  Couldn’t move.  DAY RUINED.  Managed to slip into a sweatsuit for comfort but it was hours before I had the energy to take off the gold eyeshadow I’d put on in preparation for my big day out.  Hence this awesome look above.

My boyfriend is incredible.  Never judges me for spending the morning curled up on the couch hugging my legs to my chest upside-down.  Runs down to the Polish deli across the street for Midol because I’m constantly forgetting to buy it at the store.  He suggested we start buying it in bulk.  I laughed.  “Like at Costco on a forklift!”  I laughed.  And then I cried, and my mascara ran.  Oh, menses.  But he is the absolute greatest, doesn’t blink an eye at mood swings like these.  I told him, if he ever began bleeding for a week at a time, I’d take care of him just as nicely as he cares for me!  And we laughed.  And then I cried, some more. 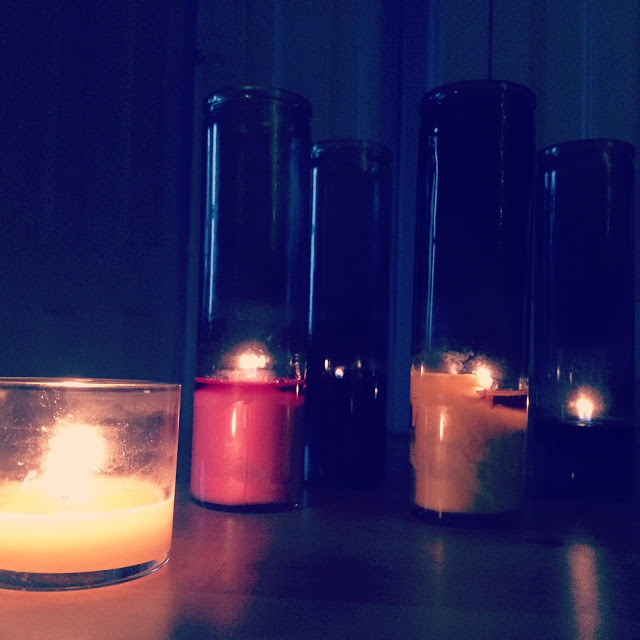 I tried to meditate on the pain.  I lit a candle, and stared at the flame and imagined my cramps melting away.  Then I lit another candle.  Before I knew it, I was holding a full-on vigil for my dead ovum.  I laugh to think of this, my former house-mate used to scoff at my novena candles and snort derisively, “Who died?” whenever they were all lit at the same time.  (Which was actually pretty rude on the more than one occasion I lit them for people who actually had died,) but there were plenty of times I lit them for romantic ambiance or just to relax.  I mean, sh-duh, people like candles.  There’s a reason there’s an entire aisle in Target devoted to candles, and it’s probably not because people don’t like candles.  Clap dust off my hands, case closed.

All day long, I had a song stuck in my head and I can’t remember any of the lyrics, but I remember the saxophone riff clearly.  I sang it into several “what the fuck is this song stuck in my head?” websites and turned up empty-handed, so I started googling music by decade. Took a stab and guessed 1976.  Guys, if you’re emotionally unstable (like me right now tbh), don’t google the Billboard Top 100 Hits of 1976.  Number One was “Silly Love Songs,” and after I stopped crying over Linda McCartney (it was a while, honestly) I couldn’t get over how perfect the list was.  I’ve always maintained that the 70’s was the most perfect decade in music, and I rest my damn case on this one.

So that’s my rambling period thoughts, aided and abetted by as much Midol as my body can handle and, to be honest, a little home-made G&T to take the edge off.  So let’s end with some questions for you:

How do you self-medicate period cramps?

What cocktails do you make with the gin in your home?

And most importantly, I’ve always said that if I could only listen to music from one decade, it would be the 70’s without hesitation.  WHAT ABOUT YOU?  What is your musical decade?  NO EXCEPTIONS, don’t punk out on me.  If you’re on this ride for Parliament Funkadelic, you gotta take the “Disco Duck” too!