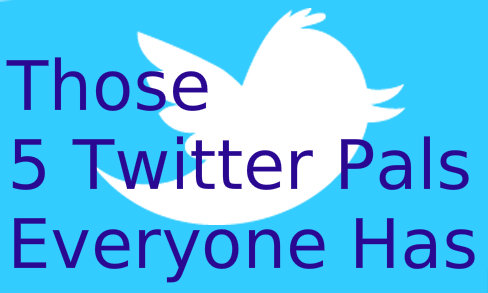 TWITTER!  Twitter is a blogger’s best friend!  Twitter is there for you when nobody else is” when you wake up at 5am and decide to start watching The Bachelor for no reason (spoilers, it’s terrible, just don’t) (but my Bachelor tweets are pretty funny).  Twitter helps you make friends with people all over the world!!! …and then there’s those people on Twitter.  For better or worse, these 5 Twitter Pals stand out above the rest:

The Point of Pride Pal: Remember that time a G-list celebrity followed you on Twitter?!  Of course you do, you took a screenshot and blogged about it.  All those RT’s paid off and now your idol thinks of you as an equal!…sort of.

Doesn’t Understand Jokes:  when you jest “Is Donald Trump related to Scrooge McDuck?!?!” they innocently reply, “No, because he is not a duck or a cartoon.”  Sigh.  Okay.  I’ll “like” it for the mention, and because you tried, but I’m not explaining how humor works to you.

Sister from Another Mister:  You’ve never met.  Though the odds are more likely than not that you’ll never breathe the same air as her, you greet each other after time apart like you’re in the same exact room.  Like you’re tweeting someone sitting next to you.  Like you do.

Infrequent Flyer:  Hasn’t tweeted since April 2015.  You may have actually googled their Twitter handle + “dead?” to no avail.  You’d like to imagine them happy, on an extended vacation on a tropical island where the coconut cocktails are plenty and the wifi is scarce.  More likely scenario is that they just got a *shudder* social life.

Your Mom:  Your Mom’s been subtweeting since before it was cool.  Is she tweeting @ herself to flout the 140-character limit, or because she doesn’t understand the point of it?  She brought you into this world screaming after 32 hours of labor, you’re not going to follow her back on Twitter?  There’s always the “mute” option.