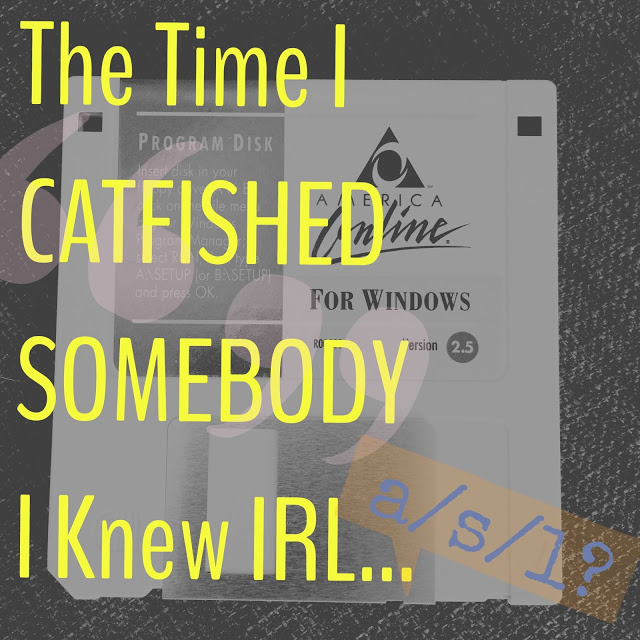 I know we just flipped our calendars over to 2016, but tonight we’re gonna party like it’s 1999!  That’s right – we’re going back to the days of dial-up internet!

If you had to google either of the phrases “dial-up internet” or “party like it’s 1999,” I’m gonna bet that you weren’t even alive yet back in the day when those ‘One Month of America Online – FREE!’ CDs flew into everyone’s mailboxes.  There were more of these flying around my home town in upstate New York than gypsy moths.  My own family received so many of these that my mother began using them in arts and crafts.  For example, she heard a friend say that reflective surfaces scared deer away from eating plants, and the backs of the CDs were pretty reflective, so she strung them from the branches of the trees in our front yard.  YES, we had AOL CDs hanging from our trees to scare away Bambi.  This apple doesn’t fall far from the crazy tree, you see.

I think it’s important that you know I grew up in a weird environment at a pretty weird time, lest you judge me too harshly over this whole ordeal.  So you get an AOL CD, you get access to the internet.  Ya with me?

You also get (dun da dun!) AOL Instant Messenger.  It’s kind of like the earliest form of texting in that 1) it actually used your phone line, 2) it was impossible to discern tone, and 3) it was a way to talk to people you’d never have the actual courage to speak to, with your scaredy, 16-year-old voice.  And, begin scene:

Once you have a clever screename comprised of a thing you like + the number of your birth month, you find your friends online, and chat with them.  Sounds easy, right?  Everyone at school has a screename and chats online, from the popular kids on down to the total losers…Hey, That’s Me!  And of course you add them all to your “Friends” List, and watch them sign in, and wonder how much fun they were having talking to other popular kids, while you changed your avatar from witch-hat penguin to penguin-in-a-pumpkin, typed your favourite lyrics from RENT into your away message, and waited for someone, anyone to strike up a conversation with you.

Let me paint a picture of the 16-year-old me that slouched in front of that screen: I was a flat-chested, braces-faced, pimple-spotted, grade A ‘weird kid’ with limp, oily hair that I cut into face-framing layers and dyed different shades of red all by myself.  If I were a Disney princess, I would be Quasimodo from The Hunchback of Notre Dame which ISN’T EVEN A GOOD DISNEY MOVIE!  Except instead of a cool French bell tower, I lived in a 2-story ranch home with AOL CD’s dangling from the trees out front.

Like the social outcasts before me, and the millions after me, the anonymity and instant gratification of The Internet in its early days flooded my world with new possibilities.  What an exciting time to be alive!  Especially for those of us whose daily reality was that of gut-wrenching social anxiety.  If it weren’t for the fact that this new digital frontier allowed me to hide behind my screen and be whomever I wanted to be, I probably never would have done what I did next:

“Hey!”  typed Eponine007 (me, duh) to SkiSlopr430 (name changed to protect the innocent).  SkiSloper430 was in a few of my classes, and while not totally out of my league, it’s fair to say that everyone was, and I was just bored and tired of being lonely to the point of drastic, insane measures like saying “Hey!”.

I lied, but only a little: “16/F/[town across the river from my small home town]”

“Cool,” replied SkiSlopr430.  He took the bait!  From there on, I had a full conversation with A REAL LIVE BOY, over the Internet, about… I dunno, school or something?  What the hell did teenagers talk about on the Internet before Kim Kardashian?  Music, I guess?  Well, we got along fine enough and after chatting for a while, he made a bold move:

“We should meet up!” SkiSlopr430 suggested.

Kid, what are you doing?!?  It’s 1999, the only people you’re gonna meet through the internet are hideous freaks lying about their identity like…well, Me!  I rest my case.

“If you like music, you should come to our school band concert this Thursday,” he suggested.  Ha!  Band geek!

Wait a minute – I’m a band geek too!  In fact, I’ll be playing in that concert as well!  Shit!

Thursday.  The concert.  I was there.  SkiSlopr430 was there.  Eponine007 would, of course, never show up.  I did feel a little bad for standing him up, but it’s not like you can be stood up by an imaginary girl!  Besides, I was there, so in a way, I never broke my promise!

I never spoke to him again – that is, online.  I never meant to hurt anyone’s feelings, I was just desperate to have somebody to talk to!  I felt so wretched about having deceived him that I never told another lie on the internet again.  I devoted my life to telling the truth on the Internet, even when it’s awkward and embarrassing – which is how you know this is a true story, the story of The Time I Catfished Somebody I Knew IRL.