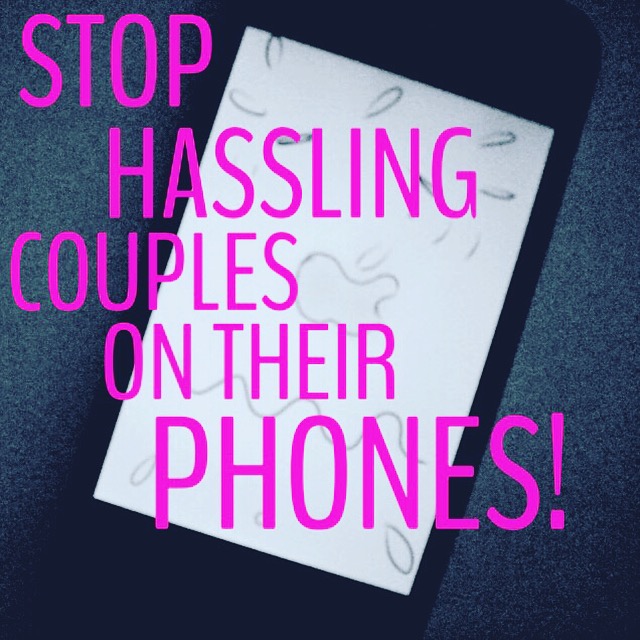 It’s open season on couples who use their cell phones in each other’s presence. Admit it – in the gut of your heart, when you see a man and woman in the candlelit corner of some hip, romantic restaurant staring lovingly into their…PHONES…you probably sneer, or scoff, or joke to your table “I’d hate to be them!”

Woah! Hold your gavel, Judge Judy! Let’s break down exactly why you shouldn’t snark on those folks for being on their phones!

First off, you’re assuming a lot (and you know what they say about “assuming” things)! Why do you look at a male-type person and a female-type person and assume they’re on a date? That is some hetero-normative bull right there. Have you considered maybe these two are friends? Siblings? Cousins? Co-workers? Looking at a boy and a girl and assuming they’re romantically involved is an icky, outdated assumption anyway. Like when gross old people tell the parents of baby girls “I hope you have a shotgun for when she turns sixteen!” like, um, ew, not every 16-year-old girl likes skeet-shooting, okay (that’s what they’re talking about, right)?

Then on top of that, you’re assuming their imaginary-totally-in-your-head-assumed-relationship is bad? Because in the split second you looked at them, you saw them on the phones? Okay, fair is fair: I’m going to look right back at you in the moment you judge them, and based off that single impression, I’m going to judge that you are rude, miserable, stuck-up, superficial, petty, lonely, and pathetic. Sound unfair? Well yeah, so do you, when you judge people for being on their phones. Really.

And what if you’ve assumed correct? That this boy and this girl that you’ve never met are in a relationship, and it is on the rocks? What business is it of yours? Are you going to help? Or are you going to sit there and snicker in superiority, as someone who has NEVER pulled their phone out in the presence of friends, family or significant others?

Hey, what would a healthy relationship look like to you?  Constantly smiling into each others’ eyes, never a lapse in conversation? That is some Disney movie BS right there. In the real world, people look at their phones. That’s why it doesn’t go “For better or worse, in sickness and health, no cell phones at Brunch, not even for a work emergency.” News flash! Controlling your partners’ behavior is not the key to happiness. Have you ever been in a relationship? Because it’s not rainbows and puppies every waking second. If you naively believe that your Prince Charming would never scroll through his Facebook notifications in your presence, then enjoy your ridiculously unattainable idealized notion of romance, Meg Ryan in When Harry Met Sally. I won’t have what you’re having.

So please, please please, stop rolling your eyes at that couple on their phones.If you just can’t stand the sight, then how about you use your judgey, overactive imagination to replace the phones in their hands with a pair of weathered, hardcover Jane Austen novels. Is this couple still in trouble, or are they your #RelationshipGoals ? Keep going! Instead of phones, imagine they are together but independently paying attention to the Sunday Times crossword, a baby, pottery wheels, a bonsai tree, whatever. Is it possible a couple can be happy together if they’re not having heart-to-heart staring contests with their better half every second they’re together?

As my father likes to say: “MYOB – Mind Your Own Business!” Stop hissing at that couple on their phones, and start paying attention to your own date. Or phone. Whichever. No judgement.