Halloween is just around the corner, and everyone is abuzz talking about horror movies, so why not talk about my favourite horror of all time? 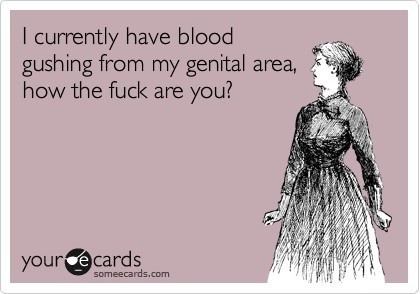 Yes, I just equated periods to horror movies.  They are kind of the same, aren’t they?  You like the idea of them, but still get grossed out by all the blood!

I have a period-tracking app on my phone, but there are definite pros and cons:

-when a doctor asks me “when did you get your last period?” and my best guess is “during Star Trek?”, I can
check the app

-when you’re tired, feverish, nauseous, achy, and crying at reruns of Bob’s Burgers:  the app will inform you that you’re just ovulating and NOT crazy or dying.  Thanks, app!

-it
is also very focused on telling me when I’m fertile, as if to suggest I’m really quite interested in creating a tiny human replica of myself, which is a desire I’ve never expressed out loud, much less in secret to
my phone so, presumptuous much?

-user interface is all budding
flowers and butterflies.  I’m not a preteen girl learning
about her reproductive system for the first time with a video using
pancake batter to make a diagram of the uterus, so why the juvenile
imagery?

I think maybe it’s that last one that bothers me the most.  Excuse me, but, when exactly did we decide that periods were pastel, flowery, and butterflies??  These things don’t even make sense being associated with a period.

FIRST of all, PASTEL.  Wearing pastel during your period is a rookie mistake!  Haven’t you heard the cautionary tale of the friend-of-a-friend who went horseback riding in white pants?  This is NOT the time for light colours!

SECOND, flowers.  Flowers are a symbol of budding and sprouting, and your period is kind of the exact opposite.  Period says “nothing will grow here for the time being!  This land is not fertile at the moment!  We are shedding our ability to be fecund and abundant!”  Your period is the killing frost.  NEXT!

Okay, Butterflies.  They start as caterpillars.  Then they go into cocoons.  Then they come out butterflies.  This is the Holy WTF of mixed metaphors, at least as far as I’m trying to understand it.  So maybe the uterus is the cocoon, and the butterfly symbolizes becoming a woman, so you’re saying that I used to be a caterpillar then I crawled inside my own womb and now I’m a beautiful pastel (of course) butterfly?  EVERY MONTH?  Ugh, that’s EXHAUSTING.

Basically, I’m sick of trying to make periods delicate and pretty and non-threatening.  If anything, periods should be empowering, badass, warrior viking times in our lives!  Think about it!

So for one, there’s cramps.  It takes a lot of courage to bravely go about your normal life business when your gut is on fire and your hips are made of broken glass shards.  I’d like to see a butterfly do THAT.  Don’t butterflies DIE if you TOUCH THEM?

How about that period acne?  Awful, huh?  What if instead, you think of yourself like (ew) Mel Gibson in Braveheart, except instead of blue warpaint, you’re slathering on concealer?  No?  Okay, bad metaphor, but, we tried.

Ugh, does anybody else get the most sore boobs ever?  This would be the perfect time for some Xena-esque breast armor!  Because if anyone or anything so much as touches my achy boobs, I will probably stab them.  YEAH!

Periods are not for the weak of heart at all.  The pain, the blood, the (ugh) responsibility.  Why would we want to pretend it’s dainty, sweet, and pleasant?  It’s totally badass!  You’re limping through life, hemorhaging blood like a wounded warrior, bravely going through the motions while you’re bleeding internally!  That’s like, an action movie where the hero is dying but still does what he has to do, except you’re not dying, and “what you have to do” is run to Rite Aid for Tampons and Midol, and you’re not a hero, You’re A She-ro!  You’re a woman, and you’re so tough, you do this multiple times a year without breaking a sweat!

Well, a little sweat.  And some chocolate gelato wouldn’t hurt, either.