Yeah, this post steals it’s title from a Bob Dylan song, but no, it’s not about Bob Dylan, but it is about something that makes my skin crawl. 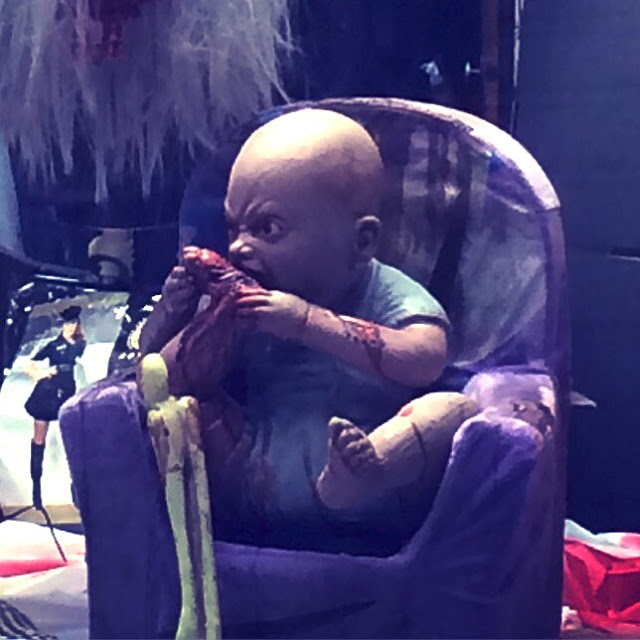 The other night I had a dream that I had a baby.

Don’t worry, I’m not about to describe some horrible gory nightmare birth, this isn’t the Hostel franchise.  I just…had a baby.

In my dream, I had a baby in the way that you have a dirty plate.  People shoot you accusatory glances as if to say, “Isn’t that yours?  Shouldn’t you take care of it?” and you try to avoid eye contact by acting busy as if to say “Are you sure maybe it isn’t someone else’s, perhaps, and they should take care – oh, fine, I’ll get to it later.”

The maternal instinct is clearly not very strong with this one.

I told my friend about this dream and he tried to read into my unconscious an unexpressed, deep longing for a child.  The fact that I was dreaming about babies was my biological clock trying to wake me up from my dreams and tell me I’m ready to embrace motherhood and raise a family.  Don’t worry, that friend is still alive, but that may only be because he lives in Miami.

So, back to my point – THE BABY DREAM.  In this dream I was constantly leaving My Baby places – like the bathroom floor at my grandmother’s old house – and forgetting it existed until people reminded me.  Like a dirty plate.  Start reading your Facebook feed, forget about the plate, 8 hours later, it’s still sitting in the sink.  Like a baby.  You probably shouldn’t leave a baby in the sink for 8 hours?  I don’t know.

Contrary to what my friend believes, I’m a realist.  I think I had the dream because that night, I’d had dinner with a friend who showed me pictures of our mutual friends’ new baby.  If I’ve got babies on the brain, it’s because someone else put them there.  I haven’t given much thought, really, to the idea of having children except when I see a charismatic baby on the subway and think “huh, that’s not so bad.”

If I sound overly defensive about the idea of babies and motherhood, I suppose it’s because there’s only two ways you’re allowed to feel about babies in your 30’s.  You either YES WANT THE BABIEZ  or I HAVE DECIDED I WILL NOT HAVE THE BABIEZ THANK YOU, BUT I WILL HAVE ANOTHER COCKTAIL.  There isn’t a lot of room for women to proudly step forward and announce to the world:  I Am Generally Not In Favour Of Having The Babiez, But Some Days I Have FOMO And Think Maybe It Wouldn’t Be So Bad After All!

It’s not like the choice whether or not to procreate is as easy to be undecided on as how to part your hair.  You can’t just part one way one day, and then decide to part the other way a month later.  It’s a winner-takes-it-all kinda deal.  And as you get older, people start looking at you like they look at you five days after they first noticed that dirty plate sitting there:  “So When Are You Going To Decide To Do Something About This, Huh?!”

Women my age, am I not correct?  By your 30’s, you’re supposed to have it figured out.  Pretty soon, as one of my pro-baby friends recently pointed out, you become considered “high risk” for babymaking and pregnancies in women older than 35 are clinically dubbed “geriatric pregnancies.”  Oh thanks, uterus, for reminding me of the imminent pull of death.

As soon as you hit 30, the decision to start crankin’ out kids becomes as pressing as the decision of which twin is the evil twin and needs to be annihilated.  Or whether or not to trust Bruce Willis and jump out of the helicopter and into the speedboat.  Actually, I’d rather take that choice!  Easy!  Life or death!  Shoot the twin with the neater hairstyle (Xander?) and ALWAYS jump out of the helicopter because it’s about to explode!

Am I the only one who has the baby dream?  My male friends tell me yes, they haven’t had the baby dream…at least, NOT YET!  Am I slowly turning into Ally McBeal?  Does the fact that I just made that reference make me even more old and crusty than the fact that I’m even worrying about this dream and what it means?  TBH, I’ve been wondering about my dreams and what they mean ever since I dreamt about my college professor’s apartment before I ever even went there (freaky!).  Is this dream just telling me I have to wash the dishes?  Don’t give me that look, I know that plate is mine, and I’ll get to it when I’m ready.