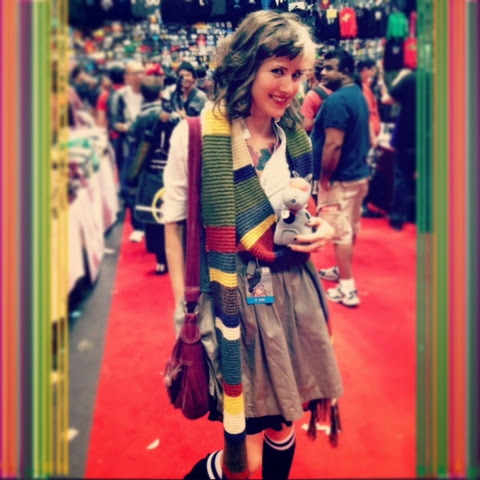 Sunday was my longest day so far at New York Comic Con, with the least photos to show for it!  I decided to try to throw together a last-minute costume and felt really cute doing this twee, hipster, gender-bent Fourth Doctor!  Saw the talking K-9 and couldn’t resist.  We made a smashing pair, isn’t that right, K-9?  Affirmative!

Started out the day by seeing a panel on transgender representation in comics that blew my mind.  Made friends while waiting in line, too!  Then just narrowly missed getting Scott Snyder to sign a copy of The Black Mirror (my favourite Batman arc) for me.  Ah well, next year!  I wandered around for hours, just touching things, looking at things, taking people’s photos and posing for photos as well!  Some of the coolest things at Con are things I never got photos of, like the giant stage where Just Dance was happening THE WHOLE TIME.  And Artist’s Alley, which is the best place to take photos of people in costume.  It’s so hard to put into words how much fun it is to just chat with people about, say, Tom Baker’s Prime Computer ads with Lalla Ward and not have someone stare back blankly at you but actually listen and be interested!  That’s one of the things I’ll miss about Comic Con until it happens again.  Other things I will miss:

–  Making friends with people based off their costume
–  So many funny/witty t-shirts!
–  Recognizing people dressed as obscure references
–  Pointing at cute guys in costume and just yelling “NIIIICE!” because that’s totally allowed.

Things I will NOT miss:

In spite of all that, I’m still so excited for next year already!  I hope to sit in on more awesome panels, check out some screenings, get more autographs and even dress up again!  What to wear, what to wear???  Any suggestions?