As I told my coworkers at the start of my third nine-hour shift that week, I felt entombed in a granite version of myself lazily yearning to break free in slow motion while everyone and everything else around me swirled about moving faster and louder than I could handle.  I was going crazy.  Sinking fast.

I spent the morning writing out my feelings and by labeling them, I was able to realize that I could push them aside and function somewhat normally.  I say “somewhat” because in all of my dreary moodiness, I left for work having forgotten to brush my teeth.

What am I, twelve?

Anyway, 7 and a half hours into my day, day had turned to night and sun had turned to rain.  There was nobody in the store.  Nobody save for myself, my colleagues, and one boy about my age in a gray v-neck shirt.  Desperate for human interaction, I struck up a conversation.

Half an hour later we were still talking:  about European travels, British television, vegetarianism, human pathology.  I believe this is what you call, “Hitting it off.”  After what seemed like almost too long…

“Hey, I’m sure you get asked this all the time, but, if you’re free, maybe you’d like to…”

“Let me give you my number,”  I rushed ahead, relieved to have not been so wrong about the vibe of the conversation.

I waved goodbye and smiled at my own victory.  I felt my tongue graze my teeth….ew.

Moral of the story, no matter how bummed out you are, ALWAYS BRUSH YOUR TEETH.  You never know what the day has in store. 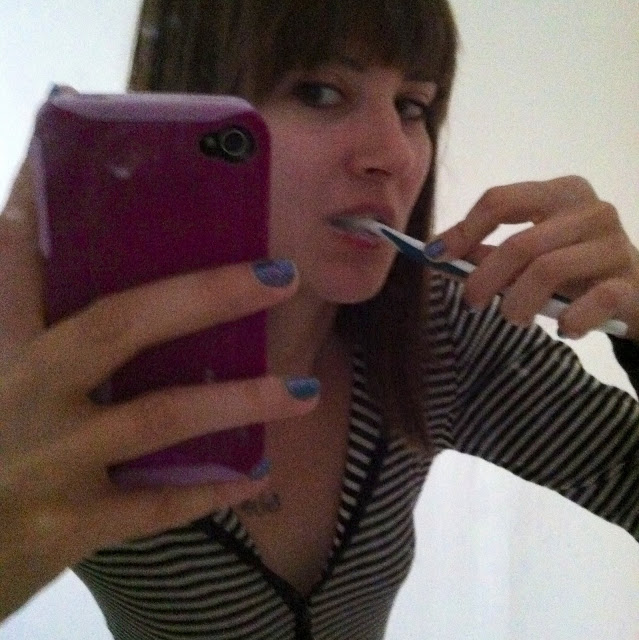