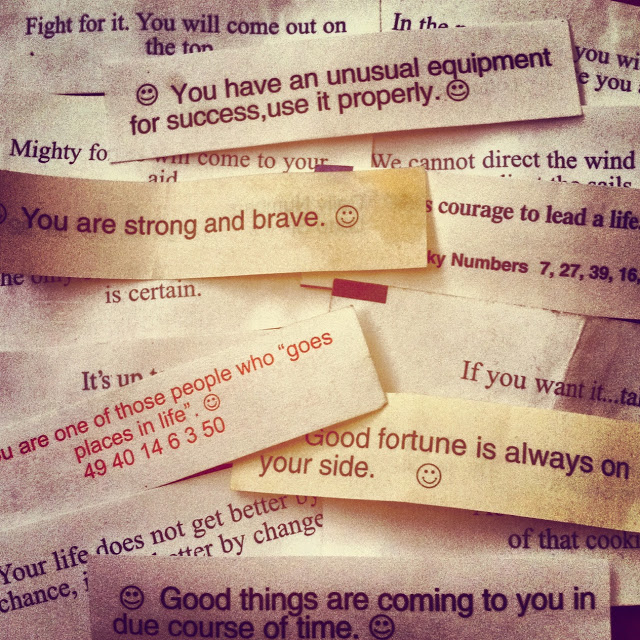 Last night was a little scary.  I realized at work that I have no “official” place to live in two weeks.  Long story, won’t get into details, but basically, some plans fell through and I was afraid.  Afraid that all was lost.

I don’t think it’s depressing.  I’ve realized, when you have nothing to lose, you have everything to gain.  Sure, I may still have some things – a little money, my health, my talents (blush blush).  And you!  My friends!  Not to be too cliche, but if it weren’t for an awesome network of friends, I would be completely lost right now!

I once received a fortune cookie that I scoffed at:

“Life to you is a bold and dashing adventure”
To me?  Me, who is afraid of everything?  Surely you can’t be serious.  The very concept of adventure, I balk.  Balked.  That is to say, at one time, I balked.

This “new” me has been thinking about that cookie a lot lately.  I know, it was just a cookie.  But out of the ashes of some major and many tiny setbacks has risen an optimism, a tireless zeal, a dazzling firecracker.  Perhaps adversity suits me.

In case you’re wondering, five hours of sleep and thousands of emails later, it looks like things are going to work out.  That’s it, gang.  No more “Wah, wah, poor me” posts, I promise.  Let’s celebrate.  I’m staying in New York City.  Baby, you’d better believe…