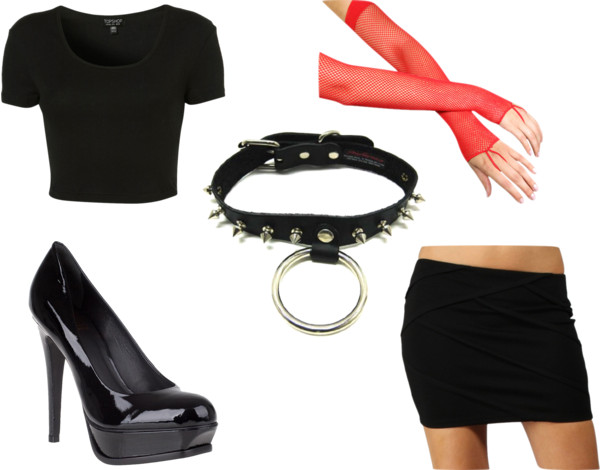 Charlotte to London by meghan-sara featuring long gloves
How cute is the above outfit?

Now picture it on an elderly man.
In an airport.

Yes, about two years ago, I was flying to London following the terrible volcanoes in Iceland.  The weather was horrible.  Flights were getting delayed and cancelled all over.  I had already 1) driven down to Philadelphia by car, 2) flown from Philly to Charlotte, and 3) read several fashion magazines while waiting for the inevitable bad news about my own plane.  If my plane gets cancelled I am stuck in Charlotte with no way to get home, and I lose out on all the money I spent on my three-week European vacation.

My fears were quickly distracted by the arrival of a tall, white-haired man in relatively good shape wearing the above bondage cross-dressing outfit. The locals sneered, the tourists snickered, and I, for my part, wanted to applaud.

Why did he wear this?  To an airport?
I like to think that he had at least one of the following reasons:

1.  Being fierce.
Like he knew everyone was going to have to deal with him being so damn fierce and he didn’t care.  So he wore the heels and the collar because he’s a freak like that and he’s not going to let anyone make him change who he is.

2.  The TSA
Because how awesome would it be to force them to frisk a grandpa in a skirt?
Not to mention for the onlookers.

3.  For Love
Perhaps his transatlantic transvestitism was for the pleasure of his lover, who was waiting to pick him up at the gate at Gatwick, who would get a huge kick (among other things?) out of seeing his/her geriatric sweetheart in bondage gear going through cutsoms.

I like to think it was number 3.
Some of us would do anything for love.

(even fly across the ocean)