Real talk:  we probably all use Pinterest here, right?  Pinterest kinda bugs me.  I like having a way to store and easily find images of say, craft ideas and hairstyles and nail art.  I think it’s a fantastic idea.  However, you may have noticed that there are some insane people on Pinterest.

Apparently, there are people out there who are so desperate to DIY, they will make ANYTHING at home.  DIY Oreos!  Um, okay, but you do know you can BUY those.  DIY cleaning supplies!  I guess so, if they actually work.  DIY sandals?

Source: gearfuse.com via Meghan-Sara on Pinterest
Yeah, okay.  Sure.  If you say so.  I’m not here to judge…but to offer some helpful guidance.  And I can imagine that’s a great idea if, say, it’s really hot out.  You’re double-fisting bottled water.  And you look down and realize OMG!  I forgot shoes today.  It’s so easy, it’s almost like they meant for you to use plastic water bottles as shoes!  Okay.

My shameful Pinterest truth is that I have two boards devoted to foodstuffs…and never cook.  Sometimes, “poke film to vent” even seems like too much effort!  I don’t think I’ve ever used my oven.  EVER.  Since we moved in last April.  There were one or two times we made our own spaghetti sauce, but that was more for bragging rights than anything else.  Most nights we play “not it” to see who will microwave the frozen dinners while the other plays games on their iPhone from the cool comfort of the couch.

So when I decided to make some changes in my life, I also thought, hey, maybe I can try to cook?  Put some of my negative energies into something productive.  So I chose the easiest recipe I could find on Pinterest with ingredients I already had on hand:

And herein lies the cardinal rule of Pinterest:  Whatever you DIY will look NOTHING LIKE the original: 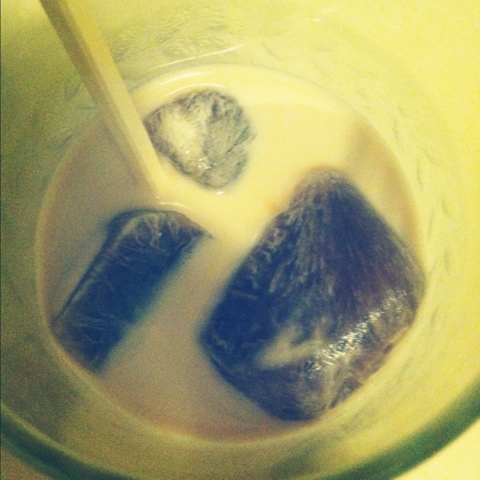 And chances are, it’s not anywhere near as good as you thought.  This was delicious, HOWEVER, unless you just want to drink cold milk, you have to let it sit forEVER while waiting for the coffee to melt into a satisfyingly strong drink.  Maybe it would be better the other way around?  With room temperature coffee and frozen milk cubes?  Does milk freeze?  It has to, right?  But will it make you sick?  This is why I don’t cook.

And why you should beware the siren song of Pinterest.