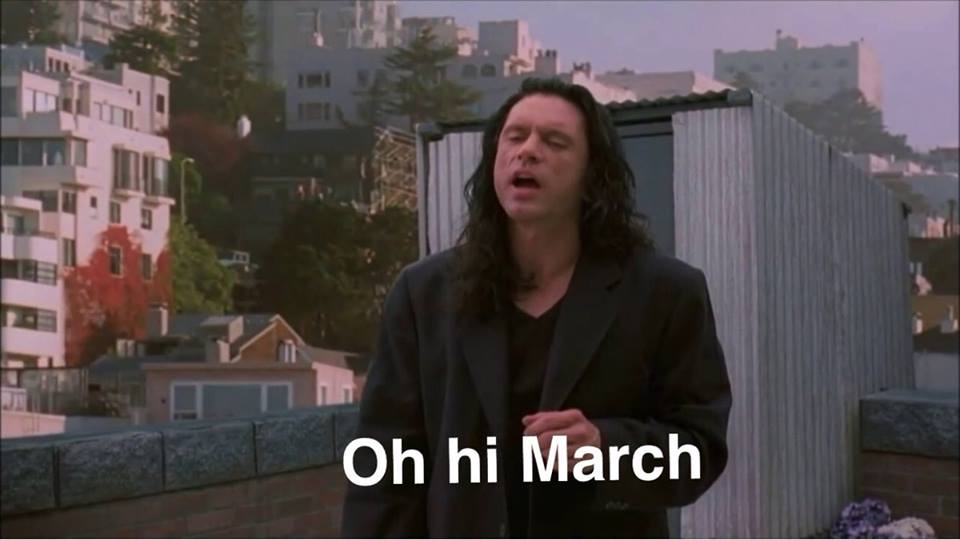 Ok so let’s look at the facts:

It’s March 4th and it’s been declared a SNOW DAY in New York City. It’s already snowed more in MARCH than it has the ENTIRE WINTER BEFORE THIS.

You will recall, our first major snowfall of the year occurred on November 15th. I remember this date because this was the day when, after a day of work, I schlepped myself through knee-deep snow, slush, and puddles to get my forearm tattoo colored in.  Karma? It’s as if sitting for an hours-long tattoo session in an area of Brooklyn that I have to travel to an entirely different city (Manhattan) just to get to isn’t difficult enough. We have to add to that the FIRST SERIOUS SNOW OF THE YEAR, which means NOBODY is salting the sidewalks, the MTA doesn’t know how to cope, and DRIVERS are losing their minds. Okay.

We really haven’t had another blizzard like that one, but there was some snow in January and February. And I’m okay with this. November, January, February. These are the months of the year during which snow is acceptable. MARCH IS SPRING.

Now, I’ll confess: I grew up in an area of the world where it would snow alllll through the end of April. Sometimes into May. I remember once in high school when our Spring Break was extended one day by a SNOW DAY at the end of our, let me say it again, S P R I N G   B R E A K.

I say it every year: In NYC, it’s Winter until the DAY it’s SUMMER, then it’s Summer until the DAY it’s WINTER. Temperatures are ONE THING. PRECIPITATION is another. I’m fine with a frigid March, heck, even a chilly April, because I know come May I’ll be sweating through my tube top while struggling to install my air conditioner in my building’s broken windows. But SNOW! Snow is an affront.

Snow signals the BEGINNING of winter. That winter should be BEGINNING just as it’s supposed to be ENDING is unconscionable. It doesn’t feel like March 4th, it feels like February 32nd. About this time every year, winter begins to feel endless and I’m just DONE! DONE, I say!