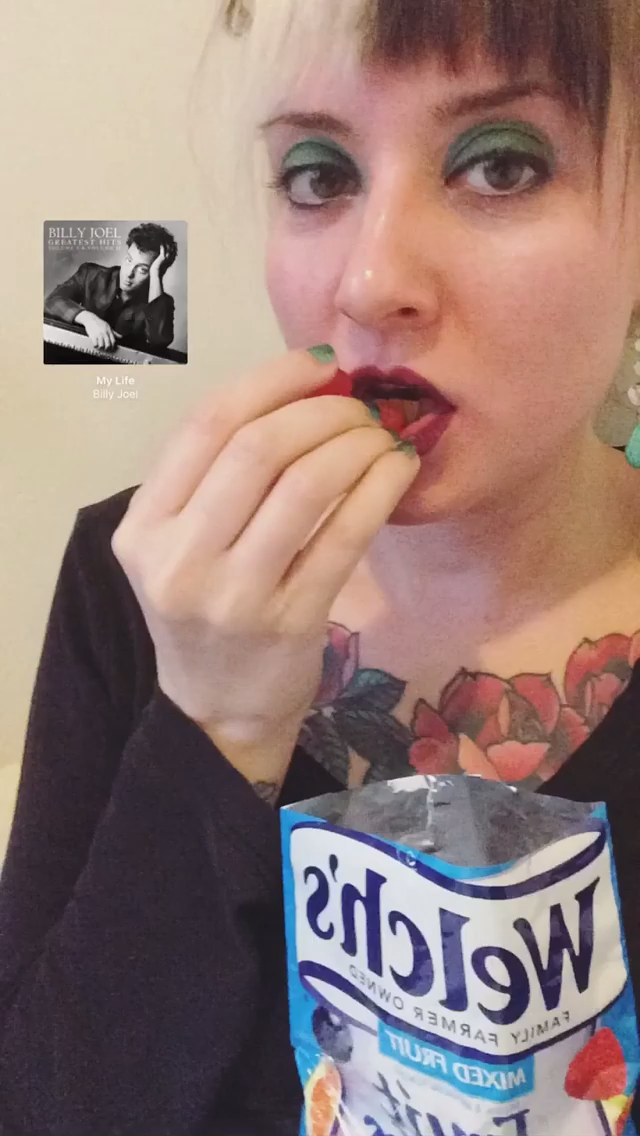 I have a long, long history with Welch’s Fruit Snacks.

Let’s start with a little trip down memory lane, shall we? Back to the Early-Mid-90’s. Now, I’m A #90sKID, so obviously, I ate a lot of fruit snacks growing up. Who among us whomst was born in the 80’s and raised in the 90’s (I mean YOU, Fellow Millennials!) didn’t BEG their parent or guardian for Gushers? Fruit By The Foot? Fruit Roll-Ups and Fruit Snacks branded with WHATEVER animated movie or TV show was hot at the time?? Oh man, I’m getting nostalgic and drooly just thinking about peeling those blue-and-neon-yellow sugary snacks shaped like Darkwing Duck or whomever off the plastic backing. I grew up with these round, tangy fruit leathers (does anyone remember those? What WERE they?!?), that I would still nosh the fuck out of if I were to find them today. But I basically really stopped eating fruit snacks in earnest after the age of ten.

Fast-forward like, 15 years into the future. When I was working at Dylan’s Candy Bar as a Greeter (read: person who stands inside the door handing out free candy), the shop installed a HUGE display of the product. I think that was when they were actually created? I’ve looked it up and honestly, I’m unable to find precise information. It’s not that important to the story. MY STORY. Which is: when we started sampling them, I of course tried them as well, to be able to speak about them intelligently, and I WAS IMPRESSED. As someone who is surrounded by limitless candy and gummy options ALL DAY, and whom hadn’t eated FrUiT sNaCkS in over A DECADE, I was taken aback. Not only were these Parent-Friendly because they are made from real fruit and contain some vitamins A, E, and C and are gluten-free, THEY’RE ALSO GOOD! Unlike the chalky, hard, and rubbery fruit snacks I remembered from my youth, these were soft, supple, and succulent. Maybe it was the REAL FRUIT that made the flavors sharp, acute, and easily identifiable? They appealed to ME as an ADULT because they actually, like, TASTE LIKE SOMETHING. And don’t even get me started on the yogurt-covered ones, OH MY GAWD. If I was making myself a bulk-bag of candy, I’d throw in some yogurt-covered Strawberries and Blueberries to the bag because they are just. that. good.

After I left my job at the candy store, Welch’s Fruit Snacks kind of fell off my radar. I remembered them being a nice, gluten-free snack, but I never really reached for them untilllllllll one day in the winter of last year, at the bodega near the studio where I work sometimes long and unpredictable hours. I had bought a bottle of water and was looking for snacks to make the $6 credit card minimum (NEW YORK CITY, IT’LL BLEED YA!) when I saw the Welch’s Fruit Snacks on the candy rack. I grabbed the Apple Orchard Medley flavor and when I ate them later, it was like… FIREWORKS. Welch’s became my preferred bodega snack, and a staple of my studio junk food rotation, joining the elite ranks of vending machine Ginger Ale and Cheetos. Still in the Welch’s thrall, I was grocery shopping near my boyfriend’s apartment and happened to notice that Welch’s are sold in boxes of smaller pouches – 10 POUCHES PER BOX! And at 2/$5, it was too good a deal to pass up. I bought up an unseemly number of boxes of Apple Orchard Medley and Strawberry flavored fruit snack pouches, and kept them in my purse for months while things were busy at the studio… and this is where Welch’s Fruit Snacks saved my life.

Welch’s Fruit Snacks have saved my life MANY times, in fact. Because I’d be working late nights, or I’d suddenly find myself overwhelmingly hungry at work, or on the subway, or while out running errands, or in a waiting room… and I’d have a small pouch of Welch’s in my purse, or my coat pocket. Realizing that I have a packet of fruit snacks JUST WHEN I would be hungry, or feeling a little low, or wanting to celebrate a long day of hard work! Always having Welch’s became kind of a trademark. I’d whip them out on hikes or at DragCon, after ghost tours… and offering them to anyone who’s hungry like some kind of supermom. When I was sick, my boyfriend bought me one of EVERY SINGLE FLAVOR which brings me to…

THE IMPORTANT PART: All Of The Welch’s Fruit Snacks Flavors, Ranked!!!

The absolute BEST FLAVOR of Welch’s Fruit Snacks is, of course, elusive. I have seen it in the wild EXACTLY ONCE, and it’s not even listed on the website. Welch’s White Grape Raspberry Fruit Snacks are available in bulk online, and I’m honestly kind of tempted. I’m sincerely tempted to bulk-order this tart, tangy, lightly sweet and irresistibly soft fruit snack.

Only ONE can be the BEST, but below that level, there’s a tier of truly excellent flavors which will shift in ranking up or down, depending on my mood or craving that day. My two go-to flavors are usually Apple Orchard Medley and Strawberry. I just discovered Island Fruits, and I love the wide variety of different flavors!

The next tier of flavors are great alternates, for when you’re tired of eating the two BEST flavors (which YES, does happen): Berries ‘n Cherries, Fruit Punch,and Tangy Fruits are all fun alternatives. Wide variety of different flavors and textures

The rest of the flavors are all delicious as well, but aren’t like, fabulous standouts to me. This might be because the texture of these flavors is harder, tougher — more like a “traditional” fruit snack, which some people might prefer, but since we know I’m all about the soft succulent texture, they just don’t do it as much for me. The Mixed Fruit and Superfruit Mix are all good flavors, they’re just not really my FAVORITE. And as far as the Concord Grape, I find, it’s really difficult to find a “grape”-flavored product that appeals to my personal tastes, so while YOU might love them, I’m just not bowled over.