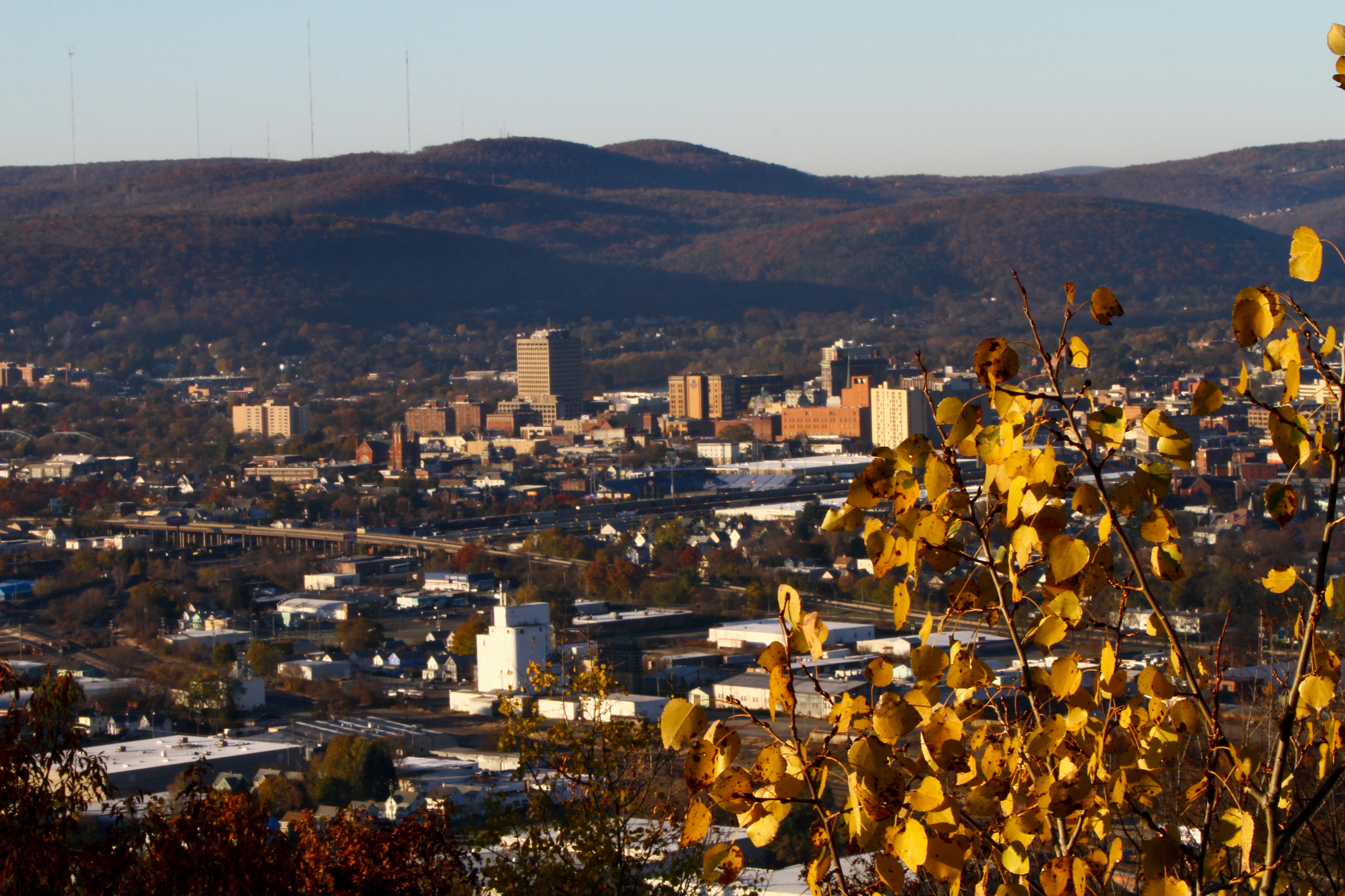 After ten years, I can call New York my “home town.” Those are the rules. Read ’em & weep, suckers.

But the place where I lived for most of my life — the town I grew up in — will always have a special place in my heart. I may have left Vestal, New York in the fall, but every autumn, I miss it more than any other time of the year.

When I think of Vestal, I think of the tree-covered hills in autumn. I think of driving or riding along the back roads into town, or climbing up higher and higher into those hills to where my old middle and high schools sat. Tell me you can look at this picture of Arnold Park, just up the road from Vestal Middle School, and not feel ALL THE FALL FEELS. I can actually SMELL this photograph, it smells like dry, dead leaves and a sharp chill in the air.

When people ask me where I come from, I usually tell them, “The Twilight Zone.” Vestal is close enough to get lumped into the Binghamton metropolitan area, and BINGHAMTON — follow me here — was the hometown of Twilight Zone creator Rod Serling! Viewing my home town through that lens just makes a lot of sense to me. Binghamton has always been a little… eerie. Spooky. With all due respect to Binghamton, it’s been in a state of shall we say “arrested decay” for many years. I’ve seen the bustling downtown become a ghost town. Stores and businesses leave. Neighborhoods become abandoned. Binghamton, to me, is a lot like the Twilight Zone: its quaint charming exterior belies the darker side underneath. But you all know how I feel about a dark side.

In 2009, Binghamton was the site of a horrific mass shooting which claimed 13 lives (not including the perpetrator), a death toll on par with the Columbine shooting. Yes, my home town is one of “those” home towns whose very name is shorthand for the mass shooting that happened there.

As if that wasn’t bad enough, two years later the town was struck by a terrible flood when the Susquehanna River overflowed and destroyed countless homes and businesses. The town is still recovering, and there are whole neighborhoods just abandoned, full of condemned houses I used to drive past on the school bus or visit friends nearby.

Another name I like to drop when people ask about my home town is AMY SEDARIS! She grew up across the river from me (haha sort of) in Endicott, New York — a sprawling suburb that I could actually see from the top of the hill my house was on. It was the “Home of the Square Deal,” named after one of the founders of Endicott-Johnson shoe company and later home to IBM. I spent so much of my childhood and early adolescence in the Endicott Public Library. I took acting classes at the Cider Mill Playhouse. As soon as I learned how to drive, I’d take every available chance to head over the river and to the Salvation Army thrift store in Endicott, where I fell in love with thrifting. Yep, that’s where it all began.

Summers growing up in Broome County meant visiting the historic zoo, the carousels in the local parks, and watching the balloons fly overhead during the Speidie Fest & Balloon Rally.

But the thing to do in autumn is drive out into the countryside to a pumpkin farm.

Iron Kettle Farm is an institution. Hay rides, corn maze, haunted house, candy apples, and OH THE PUMPKIN DISPLAYS! Year after year, it was tradition to drive out through Owego, New York (another place I’m often nostalgic for, that’s where my acting career began!), park your car in a mud pit (HA HA) and walk around Iron Kettle until your legs got sore. I can’t even begin to explain how intensely I yearn just for one day to spend at Iron Kettle, one sunny weekend day to wander around the grass, laughing at the pumpkin displays, fondling the crafts for sale in the craft tents, breathing in the cool fall air. I haven’t been there in over a decade (look at the little girl I once was!) but I’m sure it hasn’t changed. They say you can’t go home again, but if it were possible, I would absolutely go back to Iron Kettle Farm for the ultimate fall Upstate New York experience.

Fall in my home town just makes sense. Fall is the season of slow decay and death, that gives way to winter’s dormancy and Spring’s rebirth. The season of Fall is necessary to life, and my time in my home town was necessary to my life. Growing up in Vestal, Binghamton, Endicott, Appalachin, Owego, Johnson City… shaped who I am today. Made me appreciative of where I am now. I doubt I would be the colorful adult I am now had I not grown up in my “colorful” home town.