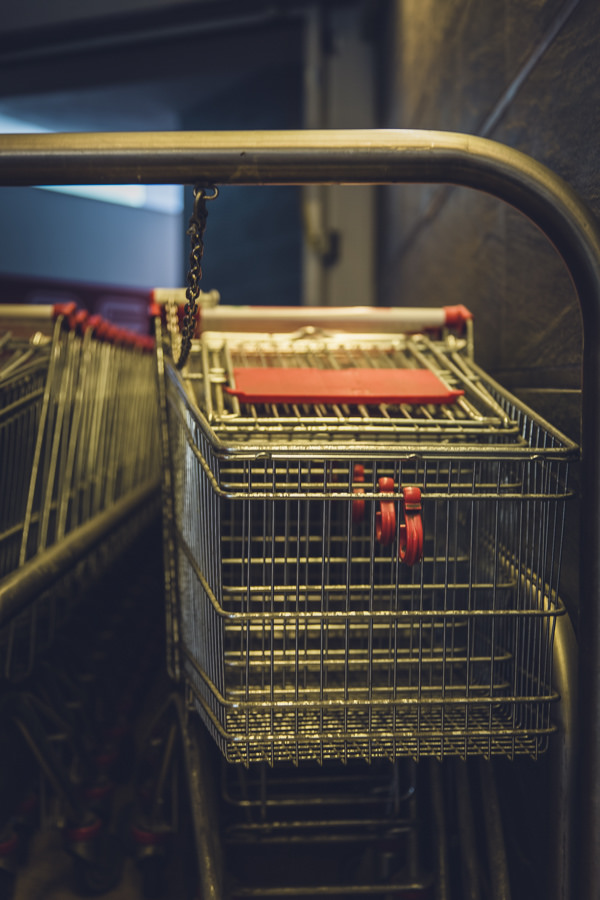 “Personal Space” is a funny concept in New York City. In a municipality where we think nothing of entwining our legs with a stranger’s on the subway to keep our balance on that crowded L train, there are still clearly situations where there is an accepted distance that one keeps from other people. On that same L train, we’re told to “be wary of pickpockets” and lectured about “unwanted touch,” for crying out loud! I have two main — I would say “unreasonable” fears, but I think it’s perfectly reasonable, given that the MTA reinforces them on my commute:

Now, we all know how much I love Trader Joe’s, despite the fact that it is almost as crowded on the average day as that blasted L train. Even my “underground” TJ’s often has a line that snakes from the front door of the store, through the produce department, down the vitamins/dog food aisle, across the back of the store, through the bakery, into the checkout. I’m no spring chicken, I am used to this!

But last night was different.

I got in line. THEN, I checked my list and realized I forgot Half & Half! I broke away from the line, ran back to the dairy, tossed it into my cart and zoomed back to the end of the line, which had grown. It was at this time that a pair of men joined the line directly behind me… or should I say… on top of me? On either side of me? They stood SO CLOSE TO ME, they were like… riding in my cart. Now, this wasn’t a busy night, the line barely grew past the end of the vitamins aisle, but they were standing so close to me — trigger warning, get ready — they were standing SO CLOSE TO ME, that every time we moved forward & then stopped, one or the other of them bumped their pelvis into my lower back.

The first time this happened, I LEAPT out of the line and wheeled around in shock. I had left enough space in front of me so that my cart — you see, I had one of those little carts with the upper and lower levels — when *I* jumped out of my skin, my cart bumped forward, but didn’t disturb the customer in line in front of me.

It’s not unusual, sadly, for TJ customers to be unaware of their rudeness. I ask you this: how many times have you waited in line in front of some impatient old lady who bashes her cart into your Achilles tendons every time the line moves forward, like she’s trying to take down a Homeric warrior? All the freakin’ time, right?

But even though these men must have NOTICED that they were mashing their genitals into my back every time we inched forward, I jumped in surprise and wheeled around every time it happened.

How could you be oblivious to humping a stranger in Trader Joe’s? I wondered. I turned and asked them if they were friends with the person in front of me — maybe they were, I dunno, bodychecking me as a subtle hint that I was intruding into their group?

“No, no… separate,” they smiled in broken English, then went back to chatting to each other in what I assumed was French?

SO, I did the only thing I could do.

It doesn’t really *feel* powerful, honestly, to avoid standing up for yourself while still distancing yourself from harm by moving ahead of your cart, hooking your fingers through the front, and dragging it through the line like a toddler who doesn’t know how shopping carts are intended to be used, BUT, it got me the personal space I wanted. These two clueless guys took the chance to advance WAY too close to my cart, like they were gonna steal my unpaid-for avocados right out from under me? Or open and start snacking on my cheese sticks? But at least I got a foot and a half of distance away from them jamming their penises (penusi?) into my lumbar region every 10-15 seconds. Grinding up against me like I’m Miley Cyrus and they’re Robin Thicke at the VMAs in Twenty-Aught-Thirteen.

The one time, and thankfully, only time I’ve ever been formally groped in public, I brushed it off. I say “formally groped” because, although there have been touches that felt wrong (like the guy who “accidentally” punched me in the eye on the 1 train and didn’t apologize even have he cold-clocked me clear in the face?), this was was OBVIOUSLY and CLASSICALLY wrong. You all know the story: crowded rush hour train, a touch on the behind that could be accidental, until it’s clearly not? The more I think about this incident, the angrier I am. It’s 2018, and Time’s Up! How hard is it for two grown men to have the spacial awareness to NOT tailgate a woman so badly in a grocery store that they’re trying to impregnate her lower spine region? Leave one car’s length between you and the person in front of you! We all want to pay for our Salsa Verde and get home, but none of us want to be bumped up into like a human Real Doll™ in the process.