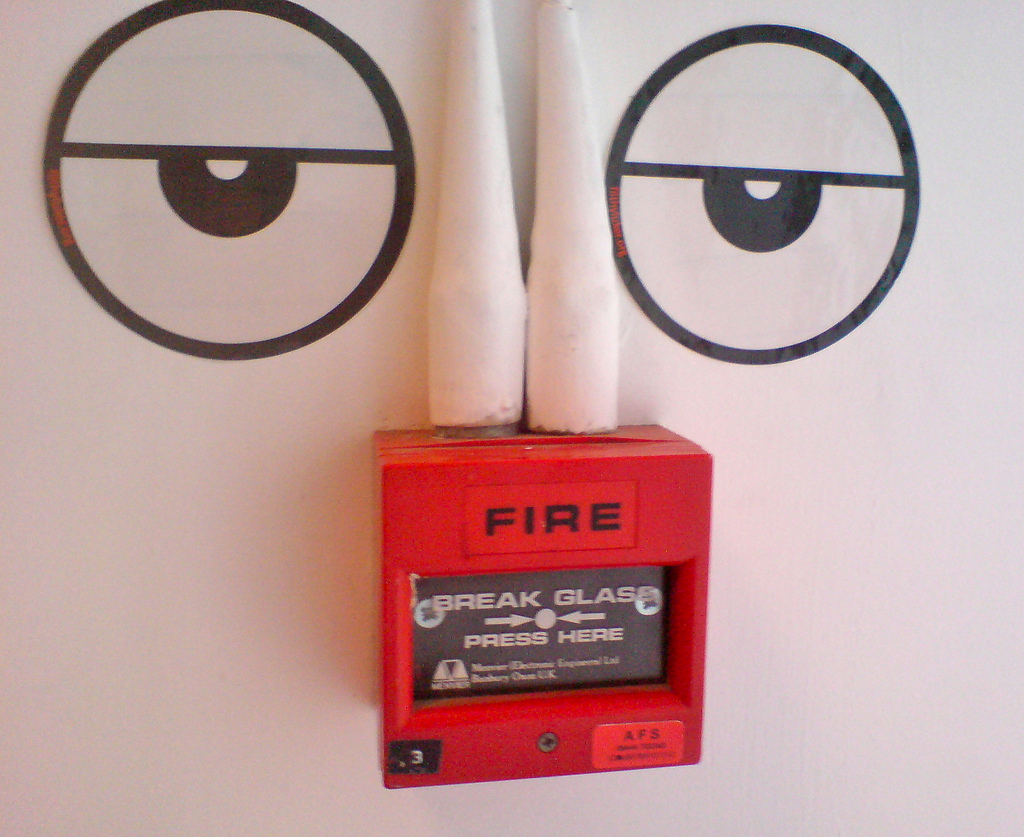 It is a scientific FACT (probably) — that at any given hour of any given day, in any given neighborhood of New York City, there will be an alarm going off.

And any given New Yorker will promptly respond to any given alarm with… annoyance.

Sirens, car alarms, smoke detectors? I have a theory that you can quickly tell a New New Yorker from an Experienced New Yorker by how they react to an alarm going off. Jumping in surprise or asking, “should we do something?” is a telltale sign that ? someone’s a little bit green ?. Should we do something? Haha! How cuuuute. An alarm is no cause for… alarm!

At present, there is a blaring alarm going off within earshot of my bed, in my home, in my apartment, and what am I doing? Blogging about how pathetic it would be if this actually concerned me. It’s been going off for twenty minutes! Now, you non-New Yorkers are probably thinking that this means I would be concerned.

Baby, I’m a New Yorker. We are the least flappable folks on the planet. We stole the “Keep Calm and Carry On” from the Brits and took it to Seinfeld-extremes! We’re the hometown of Kitty Genovese, for crying out loud! We raise “Don’t Panic” to an art form.

There has been only ONE TIME in my NINE YEARS in New York City that I have actually been alarmed.

Because a bridge blew up.

Like, blocks away from where I lived? Nothing like a shit-ton of explosives on a Sunday morning to make you question exactly how often we turn a blind eye to these things in New York.

Y’know, everyone was terrified for me moving to New York? Telling me shit like, I gotta wear a money belt with me everywhere. But come on! How’s one s’posed to get a MetroCard out of a MONEY BELT while wearing 75,000 layers in the dead of winter without holding up traffic at the turnstile?!? That’s absurd. And they tell you to do all sorts of other stuff to “protect yourself” like not walking home alone late at night (oops) not talking to strangers on the street (oops) and I probably shouldn’t have accepted a bite of that nice man’s Snickers bar when he offered it to me on the A train but let’s face it: if you’re not nibbling a stranger’s Snickers, you’re not really living in New York! “Don’t go into a strange man’s apartment”? If I had a dollar for every time… but you have to learn to quiet those inner alarm klaxons that would send suburbanites running for the hills. You just have to.

Even the idea of moving to New York should raise an alarm. “it’s too expensive, too dangerous, too risky! it’s unfriendly and cold and unfeeling, and littered with broken dreams and unfulfilled promise! you’ll be back in a year!” Who would be foolish enough to take such a risk, just to live in the greatest city in the world, just to say they’re one of them, a New Yorker?

Maybe someone who has turned against their gut instincts. Lose touch with their inner sense of danger.

The kind of person who sleeps through fire alarms. perhaps.