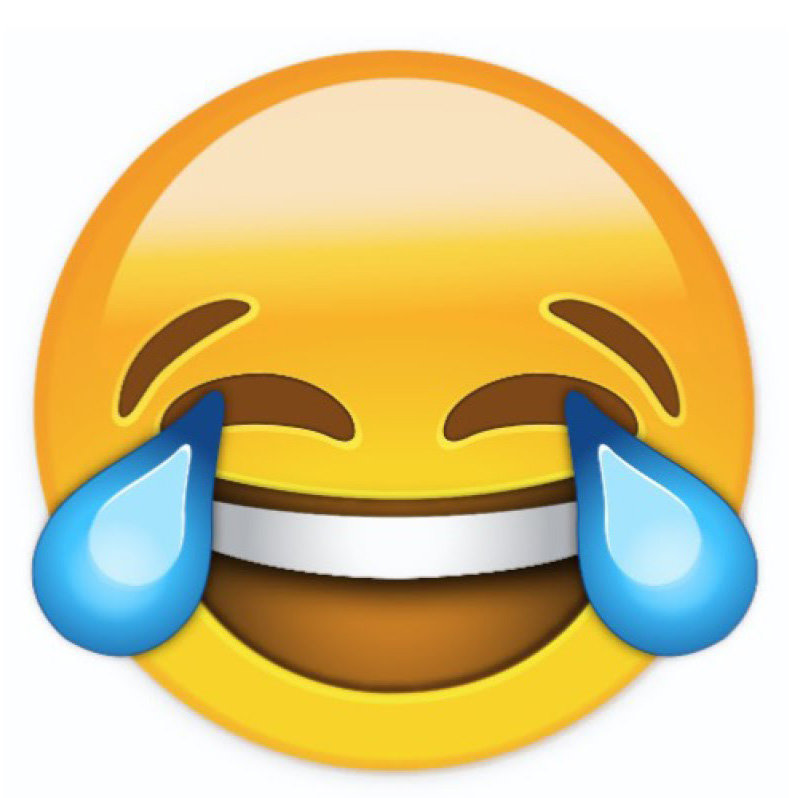 The word I use most often to describe things: HILARIOUS.

And to make things worse, I’ve picked up the habit of extending the word with a big, warm, open “A” in the middle:

It’s no surprise, then, that my most-used emoji is this guy: ?. Ionesco says we laugh so as not to cry — get you an emoji that does both.

My therapist — get used to it, I’m one of those people who has a therapist and can’t stop talking about it — recommended this book to me called The Self-Esteem Workbook. One of the first exercises in the book asks you to rank yourself on positive personality characteristics, on a scale of one to ten. There’s a list: thoughtfulness, creativity, work ethic, and sense of humor. I’ve filled out this exercise twice, a year apart, and the first time, I gave myself an ELEVEN for humor. GET IT? That was OFF the SCALE! It’s hilAAAAAArious! Second time around, I gave myself a ten. I take the thing seriously, okay? I lamented to my therapist that, while some numbers changed and some even went down, the only thing I got full credit for was joking around? “It’s good to be able to laugh at yourself,” she assured me. And I do!

I do laugh at myself, and maybe that’s my best quality. The tattoo on my arm says “Do not take life too seriously — you will never get out of it alive!” It’s an old family saying, and it’s not just engraved in my bicep, it’s been taken to heart. Humor requires not taking things too seriously: you have to be able to stand far enough back to see the joke, and it’s not a bad coping strategy. Like that Ionesco quote, you can brush aside the tears with laughter. Perspective is also essential to humor and to coping with disappointment.

Proclaiming your spirit-crushing loneliness to the entire Internet…but make it funny pic.twitter.com/Y0Bm8RyWP6

It’s also horrible. The reflexive joke-making is less about joviality and more about masking — YOU’LL NEVER GUESS! — a deeply rooted sadness. WUH-HUUUUUT? I’m sure my clever ruse was completely opaque, and absolutely nobody could tell that my desperate grabs for laughs are in fact, the loud cries of a soul in pain.

At a recent friendly gathering, I was playing a popular card game wherein the object is to match concepts together, with one player judging how well your selected card connected to the- CARDS AGAINST HUMANITY. Okay, it was CARDS AGAINST HUMANITY. Very quickly, it was apparent that I Am Seen. My responses always invoked dark humor, and my fellow players were too easily able to identify the cards I had played because they were always… depressing? Yeah basically, all my attempts at humor were about loneliness, futility, and our pointless trudge towards death. OH HEY. MY BRAND. I guess I’m not so subtle, after all, huh?

So it’s true. I’m using humor to cover up for my deep neediness and depression. And eeeeeeveryone knows it. Now I’m aware, what am I supposed to do with this?

Oh, did you think I was going to stop?

Did you think I was going to drop the mask, cue the violins, and say, “But in all seriousness, folks, let’s be real about this…”

I have worked too hard on this brand of hilAAAAArious to drop it now. It’s like ripples in a pond — I’m aware of it’s shallowness, I’m leaning into it’s pathetic attempt to console me, I’m hamming up my depression, I’m the voice of a jaded generation? Okay, I’m getting carried away with myself, but the point is, what’s the harm? A spoonful of sugar helps the medicine go down. If I’m going to be depressed, I might as well be funny about it. We laugh so as not to cry. Let’s get hilAAAAArious.