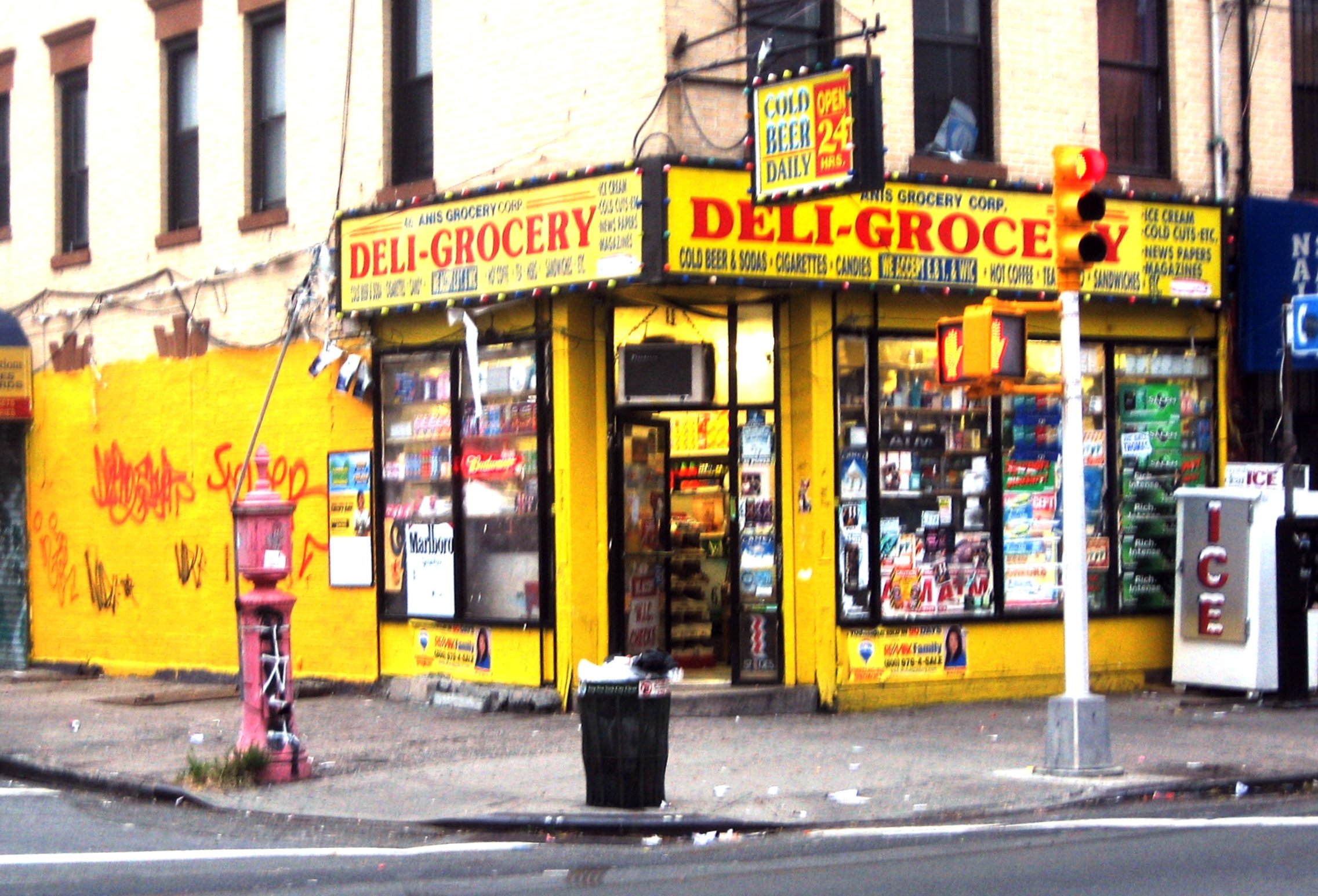 I love New York. New York loves its bodegas. I love New York bodegas! There is nothing but love in the air of bodegas. And some cat dander because, y’know, bodega cats! They keep the pests away. Sometimes, these pests present themselves in the form of tourists who crinkle their nose at the notion of a cat sunning itself atop the counter. Look, if you can’t hang with the bodega cats, you can’t hang in New York! Put that into your guidebook and smoke it.

Integral to the bodega magic are the people who staff the bodega. I’m wary of making broad generalizations, but I have never yet met anyone behind the counter who isn’t an exemplary example of a stellar human being. Know that I don’t need to say that, because as far as I’m aware, the staff of the bodegas that I frequent are following this blog, so they’re not skimming this piece for mention of their name or vague allusion to how nice they are. But they are!!! They’re so nice!!! My first sort-of-bodega was when I moved to Washington Heights. It was like a bodega/grocery store type of thing, and every damn person who worked there was THE NICEST. They introduced me to “Gangnam Style” before that was popular so YES, that was a long time ago. Now that I’m thinking about it, I actually want to take a trip all the way up there just to visit this bodega??? My next “local bodega” was at 145th Street, and they were just so kind. I’d run in there for cough syrup and ginger ale (and stamps) when I felt awful, and they even offered to deliver things to me when I felt too ill to make it down to the store!! My current bodega in Greenpoint is also incredible. Once you know the bodega, and the people who work there, and where they’re from and what their names are, and have inside jokes with them, you’ve become a part of the neighborhood. It’s as important as signing a lease or getting a set of keys: now you’re really home there.

If you want to get to know someone, take them to a bodega. You’ll really get a sense of the kind of person they are based on whether they buy Takis, orrrrrrrr male performance enhancement supplements. KIDDING! You can buy both at the bodega! Actually, come to think of it, this would be a brilliant strategy on first dates: before parting, drag them to the nearest bodega. Ask them if they need anything. Most likely, they will, and you will catch a glimpse into their true self by seeing what they buy. Do they stick to staples, such as toilet paper and coffee? They’re probably a pragmatist, who will be a dependable partner for you in the future. Are they easily swayed by the whimsy of the candy counter? You’ll never stop having adventures with them in the future! Do they buy condoms? That’s just being safe. If, on the other hand, they tell you that they don’t need anything from the bodega, GHOST THEM. They’re a compulsive liar. Nobody never doesn’t need anything from the bodega! Save yourself the heartache and lose that phone number.

Every bodega has something that makes it special. Maybe it’s the bodega where you heard “Despacito” for the first time. Or they have daifuku. Or they carry almond milk in the refrigerated case! I’ll never forget the bodega I went into after I lost my virginity. YES, THAT REALLY HAPPENED. Why the hell would I lie about that of all things on the Internet??? Well, I had just made my sexual debut and needed to mark the occasion by doing something special. I walked around the corner with my sexual partner (I really hope my mom has stopped reading by now) and bought a black & white cookie. A New York City staple, as classic as the Bodega itself. It was one of those soft, spongy yellow cookies as big as a baby’s head that come pre-packaged in shrink wrap — you can find them in similar bodegas all around the city. I bought a cookie just like it many years later, on another first date. The bodega black & white is an underrated treat, and one you know you can always find in case you find yourself in need of a little something special. Just like The Force, there is a light side and a dark side.

The dark side of the bodega is that not many people outside of New York understand its importance. Recently, two Silicon Valley Tech Bros™ tried to invent a glorified vending machine designed to put bodegas out of existence with their evil techy ways. Of course, this idea was quickly laughed out of existence. Not only was it hardly fiscally viable, it was an insult to the cultural fabric of New York City! Why in the world would you take bodegas away from us??? There truly is no way to improve upon something that is already so pure and perfect! They’re open before any other store in the neighborhood, they stay open later than any other store (some are even 24 hour operations!) and they’re one of the few places you can buy beer (cider) and stamps (and a Snickers) without any judgement at one o’clock in the afternoon! Why would anyone want to take that away?

The light side is the heartfelt sincerity of the bodega (see above: lack of judgement on alcoholic purchases made at unseemly hours of the day). Earlier still this year, bodegas across the city joined forces to protest the horrifying “Muslim Travel Ban” by closing their stores to protest. New Yorkers won’t soon forget the “Yemeni Bodega Strike,” and not because we were inconvenienced by it — we were, we all were, that was the point — but because it was such a show of strength, unity, and New York values. The community response was so heartwarming, because of course, we already know how important our bodegas are to our community. They’re not just the place to buy Fritos and bean dip and stamps, they’re our neighbors. Shit, my bodega closed down for renovations for a month and it was like a friend had left me! Now they’re even better and you know damn well I consciously decide to purchase from my neighbor whenever possible as opposed to say, Key Foods or Rite Aid, because I’m #buyinglocal.

In New York City, one’s bodega is an essential part of one’s life. It occupies a sacred place in everyone’s Holy Trinity: see, you got your bodega, your laundromat, and your go-to takeout place. The bodega will always be there for you, even when you’re far from home. When you’re on your way to a job and have a headache, any bodega will embrace you and sell you a single dose of aspirin and a bottle of water. When you’ve forgotten your lunch, the bodega has fresh fruit and granola bars to sate your hunger! When you’re having an awful day and just need beer, the bodega has a freezer full of novelty ice cream treats! Any New Yorker can walk into ANY bodega and be assured of two things: they’ll find what they need, and the coffee will be better at a fraction of the price of Starbucks. That, and that they’ll be welcomed int a place where dreams come true and needs are met. The bodega always has your back, and New Yorkers will always have bodegas’ backs back.