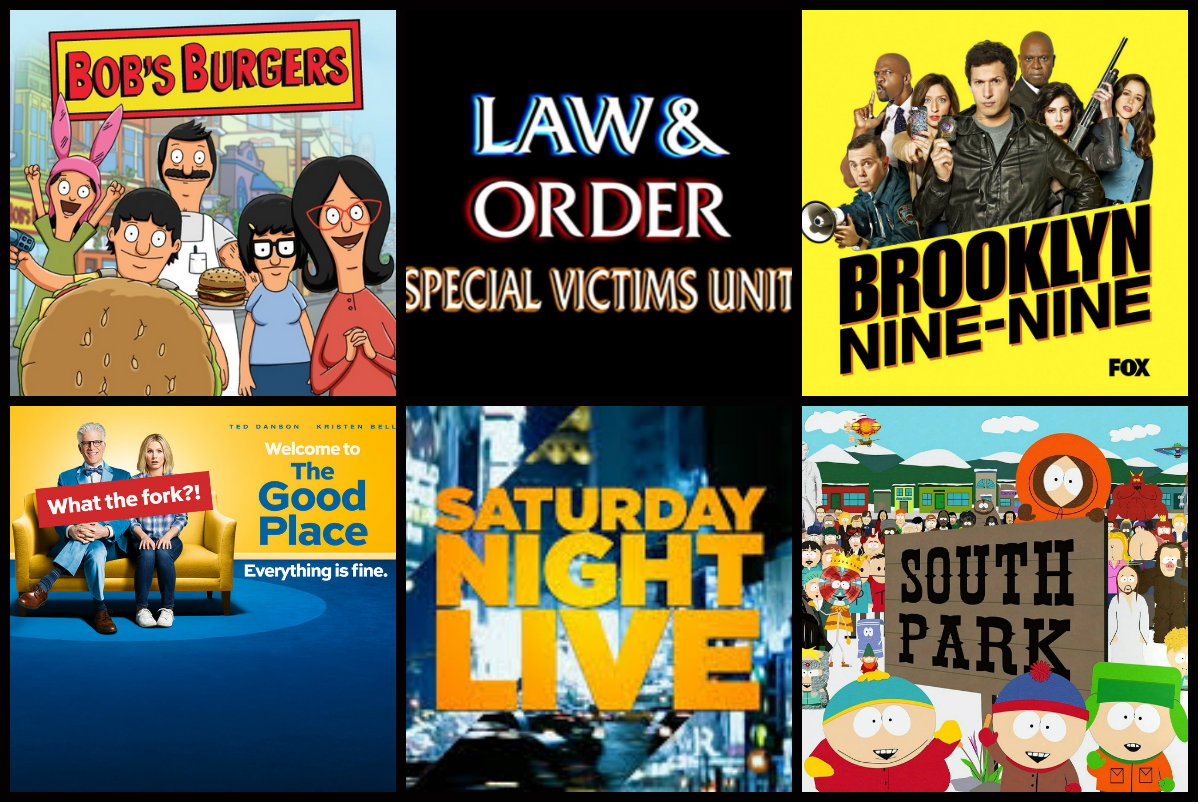 I love television. I just love television. It’s easy to forget every fall, caught up in the excitement for leaves and scarves and Pumpkin Spice Everything™, that FALL is also the season that television gets GOOD again! (I literally almost typed “television gets GREAT again” but then I realized that I had typed 2/4ths of “Make America Great Again” and I broke out in a cold sweat and had to go back and delete it, but it was still so awful that I had to tell you about it). I haven’t had a TV in years, so I haven’t been watching as much, but thanks to Hulu I can catch up on TV after it airs! I just have to beware of spoilers! And for once, there are some current shows I’m really excited about viewing all new episodes of this fall. And they are…*drumroll*…

This is such a heart-warming, gentle show. I don’t even care if it’s very good, it makes me feel good, and that’s all I really care about! It’s such an endearing show that’s also actually funny! I absolutely see myself in Tina, the Tina-centered episodes are my favorite.

Am I gonna sit here and lie to you and say that Season 19 is as good as Seasons 1 – 9? No, it is not. It doesn’t even hold a candle to “classic” SVU… but in some ways, that’s actually awesome?? It’s gotten a lot hokier and a lot more contrived, which, actually, I’m totally okay with! Look, back in the day, we could handle a deeply unsettling SVU surprise reveal, but now, daily life is so stressful, that we need these fluffier plot lines. At least, I DO!

As I said in last month’s favorites post, this is probably the best show on television at present. It’s socially conscious AND goofy AND clever AND the writing is good AND the characters are perfect. Like, if you come away from this post excited about ONE new show, it should be this one. There’s FOUR SEASONS of this on Hulu, and you’re gonna want to start at the beginning, so this can be your light-hearted binge-worthy fare.

Yeah, I know! I’m surprised, too! I saw the posters in the subway for Season 1 last year and I thought it looked AWFUL. I hadn’t heard ANY talk about it or buzz from anyone! I don’t even remember what possessed me to binge-watch the whole Season 1 on Hulu after it had concluded on TV (it’s now on Netflix too BTW) but I’m SO GLAD I DID. And I have high hopes for Season Two, as well! Holy motherforking shirtballs, this is ACTUALLY FUNNY! It’s very dark humor, and the acting leaves a bit to be desired (sorry!), but the worldbuilding is so fleshed out and visually stunning. You could easily binge this over the weekend and be all caught up to the current season!

Who’d have imagined that it would take the imminent destruction of our known world to make a 40-year old variety show good again??? Just when everything else started to suck, SNL started to unsuck and has been reborn…again…and it’s GOOD! Not just the political stuff but like, mainly? There’s also been some excellent work on original songs and digital shorts. I’m SO EXCITED to watch this every Sunday (cuz that’s when it posts to Hulu)!

Yesssss I know this show is problematic, and sometimes it makes me REALLY uncomfortable, and there hasn’t been an episode this season that hasn’t made me cringe, but it’s vital that someone do this kind of work. There. I said it. Disagree with me in the comments all you like, I still think it’s an important show.

Now, here’s the rub: two new-ish shows I’m dying to watch are NOT on Hulu yet. HULU! YOU HEAR ME! YOU NEED TO GET ON THIS!!!! I have no idea how it’s going to happen, but I really do want to watch:

I don’t understand it, the previous season was on Hulu and everything!!! What’s going on??? Why am I being tortured like this??? I have to figure something out, before this entire season gets methodically spoiled for me on social media. Big frowny face.

I have heard very, VERY mixed things about the much-anticipated reboot of this show. I am desperate for the opportunity to form my own opinion!!! I remember watching the show when I was a teenager and thinking it was so revolutionary and so clever, but I don’t know if the original show has aged well, OR if the same concept translates into modern audiences? I have to find out!!!

What TV are you excited for? If it’s any of these, tell me how you’re liking the new season!!! I’ll tell you…the day after it airs! Thanks, HULU!!!