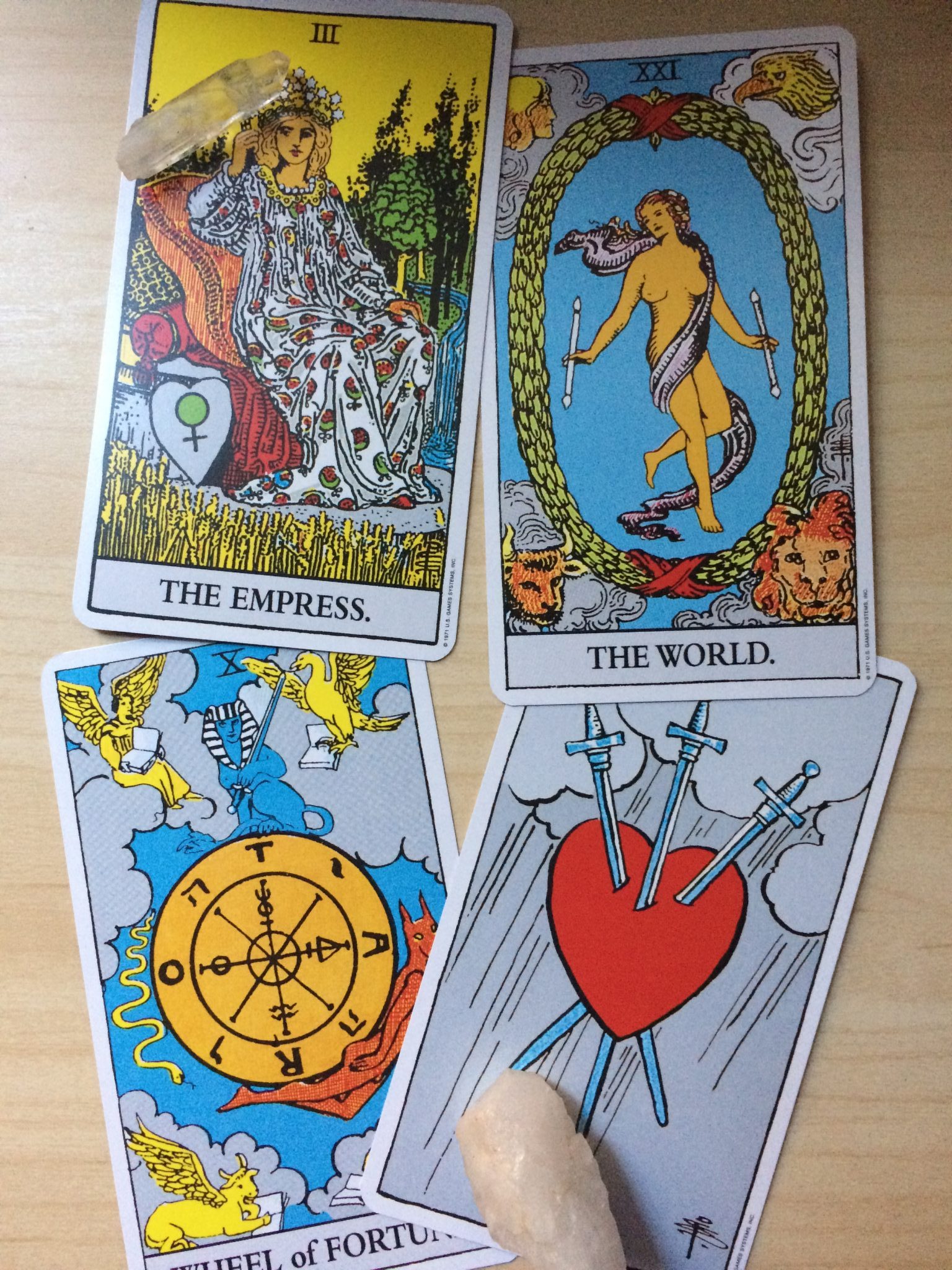 As of this morning, I have memorized 72 of the 78 cards in the Tarot deck (more or less). And yeah, you can say whatever you want, I DON’T CARE.

I’ve bought myself Very Meaningful Crystals to wear, and I’ve started reading my horoscope every place that offers it — Oh, does Bon Appetit do horoscopes? I’m just gonna scroll down to Leo, thanks.

And I say this knowing there was a time when I might have felt ashamed for taking up such a whimsical — and yes, stereotypically feminine, which we should discuss — hobby.

But now I’m not. Because I just got DUMPED! Yeah, I didn’t write about it for a whole month, but I’m damn sure going to write about it now! But first, I’m going to talk about the woo-woo-hippy-doo stuff.

I mean, you already know I’ve been open to this stuff for a while. I posted all what I believe in, and I’ve been open about trying the float tank AND the sound bath. Crystals are pretty, and I’ve been warming up to believing in them, and I’ve decided, “Why not?” And you remember how I downloaded that Tarot app after returning from Burning Man!

Well, I started relying on it HEAVILY when I had my heart broken. Suddenly, my life went from comfort and love to uncertainty and fear. I mean, not just about my distant future, but in the short-term, I was looking for affordable, safe housing in New York City on very short notice. I couldn’t understand why someone who meant so much to me, who’d been through so much, just didn’t care about me anymore? How could I still be so deeply in love with someone, while at the same time, fantasizing about him going off into the desert to “find himself,” eating too much peyote and wandering off the trail, falling off a cliff and snapping his spine, coming to only to realize that he is being painfully devoured alive by wolves and wishing in his final moments that he’d treated me better? Related -do you even love someone if you don’t secretly wish they’d be eaten by wolves? Were the last three years of my life a lie, but I was too blinded by love to see it? Nothing made sense, and I needed answers. And I was willing to take those answers wherever I could find them.

They came in a somewhat fortuitous stroke of luck, and in Connecticut of all places! At an event celebrating the life of my late cousin, I had the opportunity to have a full, proper Tarot card reading. I was really afraid, afraid I couldn’t make it through without crying, as I’d been crying basically non-stop for two solid weeks, at that point. I told my reader up front that I’d just been tossed out by the love of my life, and I was nervous about what he (the reader) had to tell me.

Half an hour later, my head was spinning with new ideas, revelations, and possibilities. I have to say, from sitting down certain that I was bawling the whole time, to standing up again having not shed a single tear, I was completely changed. Whether or not the predictions were true, they gave me something to hope for. New potential at work and a raise to reflect my efforts? Cool! That’s something to work towards! A visit to a warm, beachy area in the early spring? I didn’t see that one coming, but yeah, I guess that’d be nice! The reader even told me that new love would come again “soon,” but that it would just feel right, and would be affectionate and nurturing in a way that my last relationship never was. And although I wasn’t really ready to have that happen, it did quiet those nasty fears that worried I might be doomed to be alone forever. And like I said, whether it was all true or not, it didn’t matter. I needed reassurance. I got it.

So then I thought, how could all this be so bad? It gave me what I wanted, which was to feel a little bit better. My mind had been a locked cell, crowded with fears, painful memories, insecurities, and such. This reading was like a kind stranger, unlocking the cell and guiding me out into the daylight for the first time in what felt like an eternity in solitary confinement. I decided, on the train home from Connecticut, that I was going to learn how to read tarot because I wanted to give that to someone else. I was helped more than my reader could have known, and I wanted to pass it on to whoever else might be feeling lost and hopeless the way I was. Look, I still take it with a grain of salt, but it helps me think about things on a daily basis:

That Mystic Mondays app, the one that electronically “draws” me a new card every day. There are days when I get a card and think “wow, this makes no sense.” But when I think about it, throughout the day, I start to see how it applies to my life. Like horoscopes: they’re just general and vague enough to apply to almost everybody, but maybe that isn’t the point: maybe the point is to break you out of whatever rut your thought patterns have got you entrenched in, and make you see things from a different angle. I know that picking up six cards to memorize the meanings of every morning has given me a reason to get out of bed, to focus, to use my mind for something other than to dwell on my misery and feelings of hopelessness and abandonment. Every day, I practiced seeing my situation through a different point of view, and I have to say, it was illuminating!

And here we come to a touchy subject: I delight in the subversiveness of “going all New-Agey” because I know it’s exactly the sort of thing that would make me a “bad girlfriend.” Good Girlfriends™ are supposed to “be cool,” have no hobbies, pick up and follow their mens wherever they go, and foreswear any activities or interests that might make them seem “crazy.” Am I the only woman who feels pressured to sand off her funky edges to make herself more suitable for a sensible man? All I ever was, was stupid, childish, irresponsible, and wrong. No matter what I tried or attempted, it was never good enough. Now, I kind of feel like, “What’s the point?” I might as well lean in to being childish, stupid, irresponsible and wrong.

And if this turns out to just be a phase? So what? Who’s hurt? How could it be so bad for me to put my faith in some crystals and some cards that turn out to be meaningless? If my fling with the spiritual turns out to be short-lived, at least I won’t be tormented by memories and fantasies of what could have been. If there’s anything I’ve learned, it’s to take nothing for granted and to fully enjoy every moment you have, because everything pleasant goes away quicker than you’ll expect it to. At least this way, I’ll see it coming… in the cards.