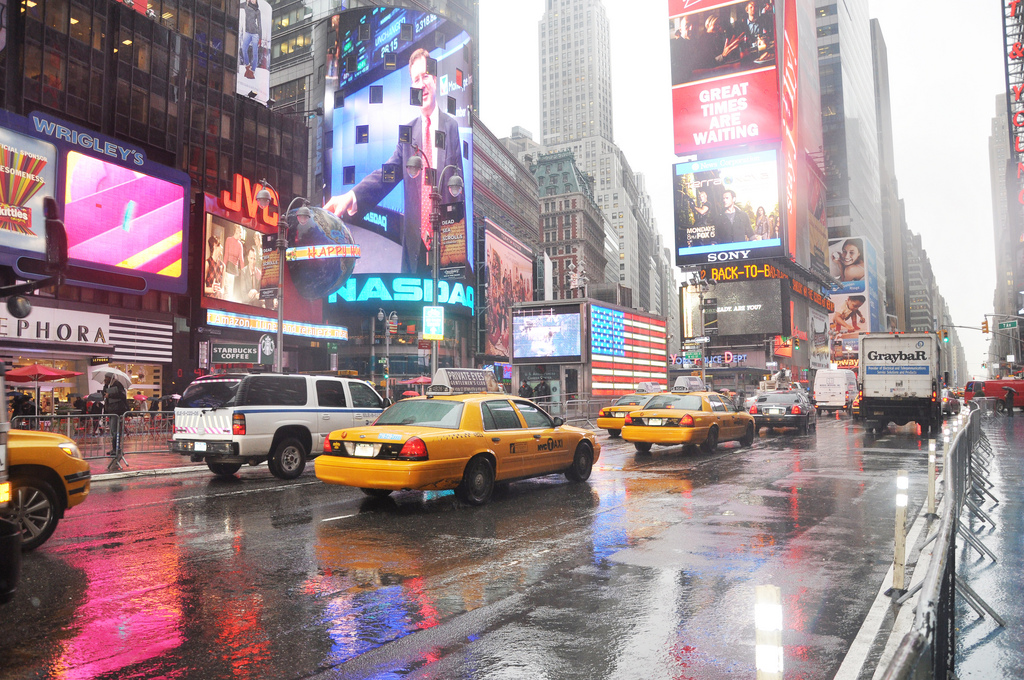 It’s because everyone is carrying umbrellas.

A normal sidewalk is like a stream, and its pedestrians like fish. Foot traffic hinges on the ability of walkers to blithely slither past each other, faster fish weaving and bobbing through schools of slower fish.

A cumbersome umbrella can double, even triple a single person’s size on the street. Gone is our efficient stream metaphor: now, simply walking down the sidewalk is a jostling mess of accommodating umbrellas. Remember those plastic puzzles you’d play with in the dentist’s office? The ones where a picture is printed on squares in a frame, only there was one square missing, and you had to slide the squares in and out of that empty space to form the image?

In front of you is a pair of slow-moving tourists. The subway station you’ve walked half a mile to reach is just across the street, and you have the signal! With both hands free, and using your momentum from speed-walking thus far, you break into a run. You place a hand on the shoulders of these shuffling zombies and vault yourself up and over their heads, landing in the crosswalk just as the signal starts to blink, sprinting into that station and down the stairs as the train bursts out of the tunnel and onto the platform. You swipe and push your way through the turnstile as the doors open and collapse into an air-conditioned seat.
This is the stuff New Yorkers think about when they masturbate.

Now, imagine our SAME scenario, only THIS TIME, it’s pouring rain. That pokey couple ahead of you? They’re each carrying a golf umbrella, and they’re holding hands for dear life. What can you do?! You can’t pass them. You’re stuck behind to watch helplessly as the signal changes, and you feel Your Train rumble away from you underneath the sidewalk. The couple who’ve train-cock-blocked you? They’ve ducked into the Starbucks on the corner to ask directions to the Statue of Liberty (WRONG ISLAND ASSHOLES!!!) and as you fumble for your MetroCard with your non-umbrella hand at the crosswalk, a garbage truck hits an 18″ deep pothole and sprays you with filthy street water, head to toe. Your God is dead and he died laughing at you.

And that is why I am twenty minutes late to work today.