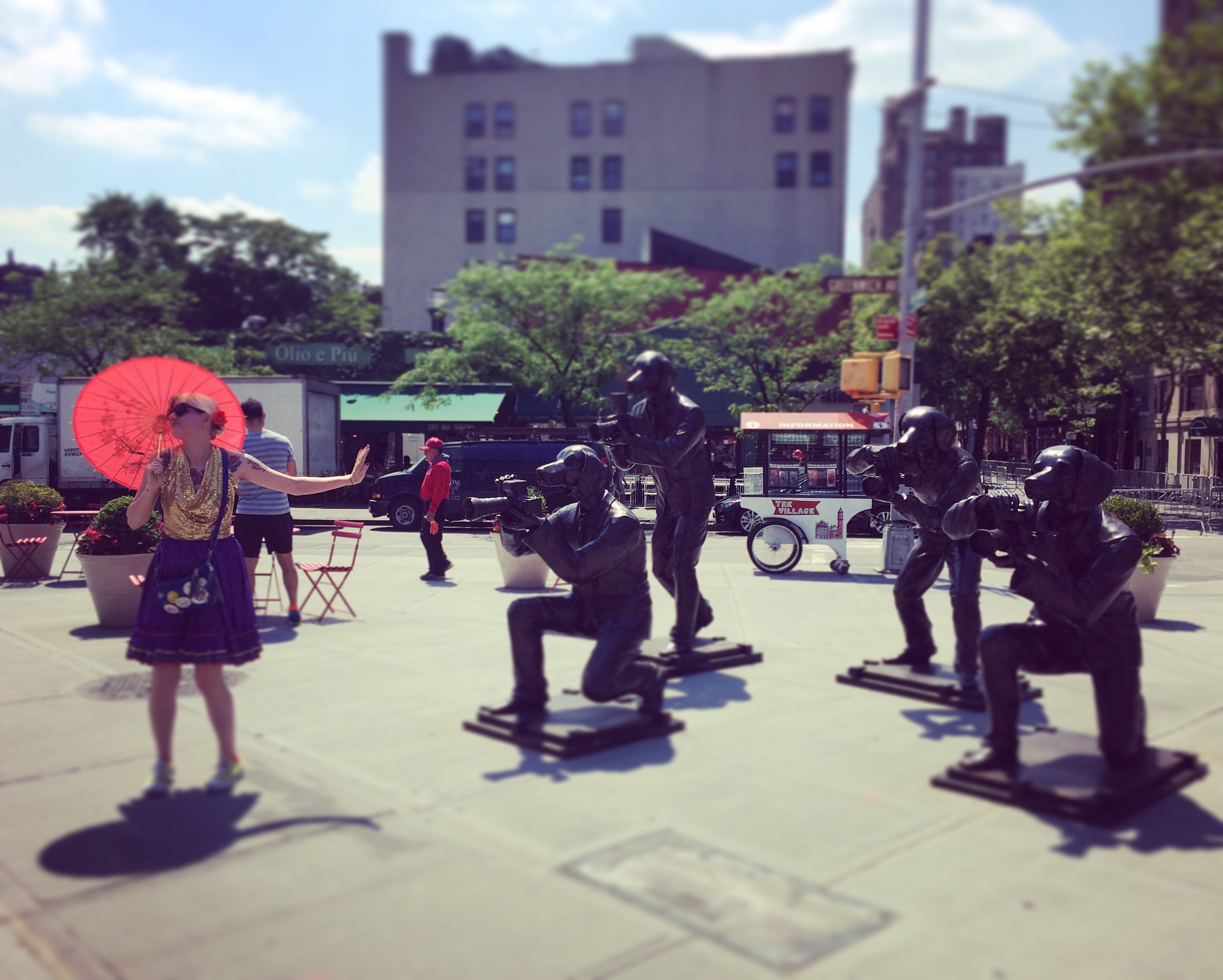 It happened after therapy.

It happened with my friend.

It happened during one of my tours.

And it almost happened while running a work errand, but I put my hand up and said “No.”

When I was a kid, somebody told me that “ancient cultures” believed that taking someone’s photograph would “steal their soul.” I’ve been trying to research this to debunk it, but it doesn’t seem to exist outside of my memory. It’s an idea that’s bounced around my brain for as long as I can remember, and every so often, I wonder whether or not it’s true.

It doesn’t feel true when I take a picture of myself. But it certainly feels true when a random stranger — walking past me on the street — raises their camera up to me face and hits the shutter button: CLICK!

Considering the number of selfies that exist of moi online, you’re probably stunned that I’m complaining about having my picture taken. ME! I’ve been very upfront about my lifelong desire to be photographed for the back page of Time Out New York, and I’m thrilled to oblige street style bloggers who ask my permission to take a snapshot on the street (usually with the condition that they take a photo on my phone, that I can keep). This is just the way things are done at Comic Cons and Burning Man: general rule is, you don’t take someone’s photo without their consent, and if you do, you’re a jerk.

Story time! In my entire life, I’ve sent a nude photo exactly once. (Calm down mom! I was an adult and I didn’t show my face). I regret that I was so flippant about this when, years later, out of the blue, the recipient of said photo sent me a message. Basically, hi, how was I doing, and by the way, could I re-send that photo? His computer had broken and he’d lost everything on it, including that one photo of my bare behind. Um. WHAT?! Let this be a lesson, kids: a photo is forever. Even if you don’t believe that it steals a piece of your soul, that photo could be fap-fodder for someone you haven’t even thought about in years. And I was furious! Furious that this person, who was firmly in my past, still felt entitled to some part of me that I’d so casually parted with. Take it from me— and Anthony Weiner — just DON’T SEND NUDES.

Sending nude photos of yourself to someone is totally your choice, at least it’s within your control. But what about that which is beyond your control, i.e., that asshole who just shoved a DSLR in your face and snapped a photo in the middle of the crosswalk at 49th and 6th? Apparently, he has the right to do that. According to both Lifehacker and LegalZoom, that’s his right. Yes, you could confront the guy who poked his large film camera down your shirt then bolted as you walked into Trader Joe’s, but he technically isn’t violating the Video Voyeurism Prevention Act unless he posts it online. Get ready to spend the rest of your sleepless nights trying to find that snapshot of your disembodied torso from the clavicle-down on the deepest reaches of the Dark Net.

Equally bothersome to the feeling of violation is the guilt, because I’ve actually done this before. Not to this extent, exactly, but when I first obtained a phone with camera abilities (2012!), I was guilty, yes, of stealthily snapping shots of attractive people on the subway. As if practicing for my freelance photography job at Sexy Straphanger Monthly, a publication that I just made up to justify violating a complete stranger’s privacy just because I found them attractive. When I think about this logic, and I put myself in the shoes of the people who have shoved their large cameras at my face, without even caring if I notice, a new emotion joins the “anger” — and it’s “fear.” I’ve been here before, to this place where someone thought that their one-sided desire to have personal access to me justified violating my privacy and my clearly expressed wishes for him to stop. What really bothers me the most about those cameras in my face? They’re triggering.

Yes, “triggered.” Triggered, the most popular word of 2016-2017, absolutely fits in this instance. I spend every other Wednesday on a therapist’s couch trying to come to terms with the violation of being stalked, having my social media accounts monitored then being sent frightening voicemails with threatening undertones. Trust me, this is no joke, and the irony doesn’t escape me. For someone who has been blogging since 2009, essentially putting myself out there for all to see, the feeling of being watched suddenly became my biggest fear. Let’s be blunt: it isn’t paranoia when it’s true. For years, there was someone out there who watched me from a distance, having access to all the parts of me I shared with the world, but thinking they were just for him. I am reminded of the icky feeling I had immediately after I realized my casual acquaintance was still looking at my nude butt photo from 2007 — a part of my soul being taken and used in a way that I did not intend. I could say, “Be careful what you put on the Internet, Kids!” as a moral lesson here but at least I’m smart enough to know that what happened from 2012-2014 was not my fault, and that calmly telling someone over the phone for the 3rd time “I’m hanging up now, do not call me again” only to get 21 voicemails over a seven-day period is not anything that somebody asks for. No matter whether or not their dog has died, or they’ve changed their hairstyle. That’s just the stuff on the outside. To compensate for what I felt was my outside persona being stolen and used against me, I buried my true self so deep that I’m still trying to find it (hence the therapist’s couch, every Wednesday). And when someone shoves a camera in my face, I feel with rage what I felt so many times from 2012-2014: “You don’t even know me! Why do you think you own me?” I feel like I’m being picked to death by vultures. I just want to live, ok?

So, what’s the solution to unwanted photography? After extensive Googling, it seems that one phrase keeps popping up over and over: if you don’t like being photographed in public, just don’t leave the house.  Gosh, how come I didn’t think of this! I should tell Lady Gaga and everyone who has ever worn pajamas to a Wal-Mart, if they just stay home, they would never become international subjects of ridicule!

Or, you can do what I did the other day, outside the Port Authority Bus Terminal when I saw that camera go up: I put my hand out flat to block my face, and said “no.” Calmly and politely, as if I was speaking to a child who was trying to pull my hair. He snapped the photo anyway, for the record, but I hope for a minute I disrupted his inner narrative of entitlement to photograph anyone and everything he sees on his Vacay to NYC!!!. Worst case scenario, he probably remembered it that night in his hotel, flipping through his photos, and thought to himself, “How dare that bitch try to stop me from taking a photo of that bitch?” But in the best-case scenario, maybe hearing me speak showed him that I was a live, human being, with thoughts and feelings. Thoughts like, “I don’t want to be photographed” and feelings like…that vulture thing I already said. Maybe he would think twice before the next time he shoved his camera in another stranger’s face, flinching before pressing the shutter button, asking himself, “Do they want this?” Maybe he’d start to embrace the Bill Cunningham within by asking the Humans of New York for photographs.

Like, I know I’m photographable. But think of it this way: I’m not the Freedom Tower, which you can just photograph whenever you want. I’m Starry Night, and there are rules to photographing me. Number one: ask permission from the guard. The guard is ME! And number two: No flash. Ever.