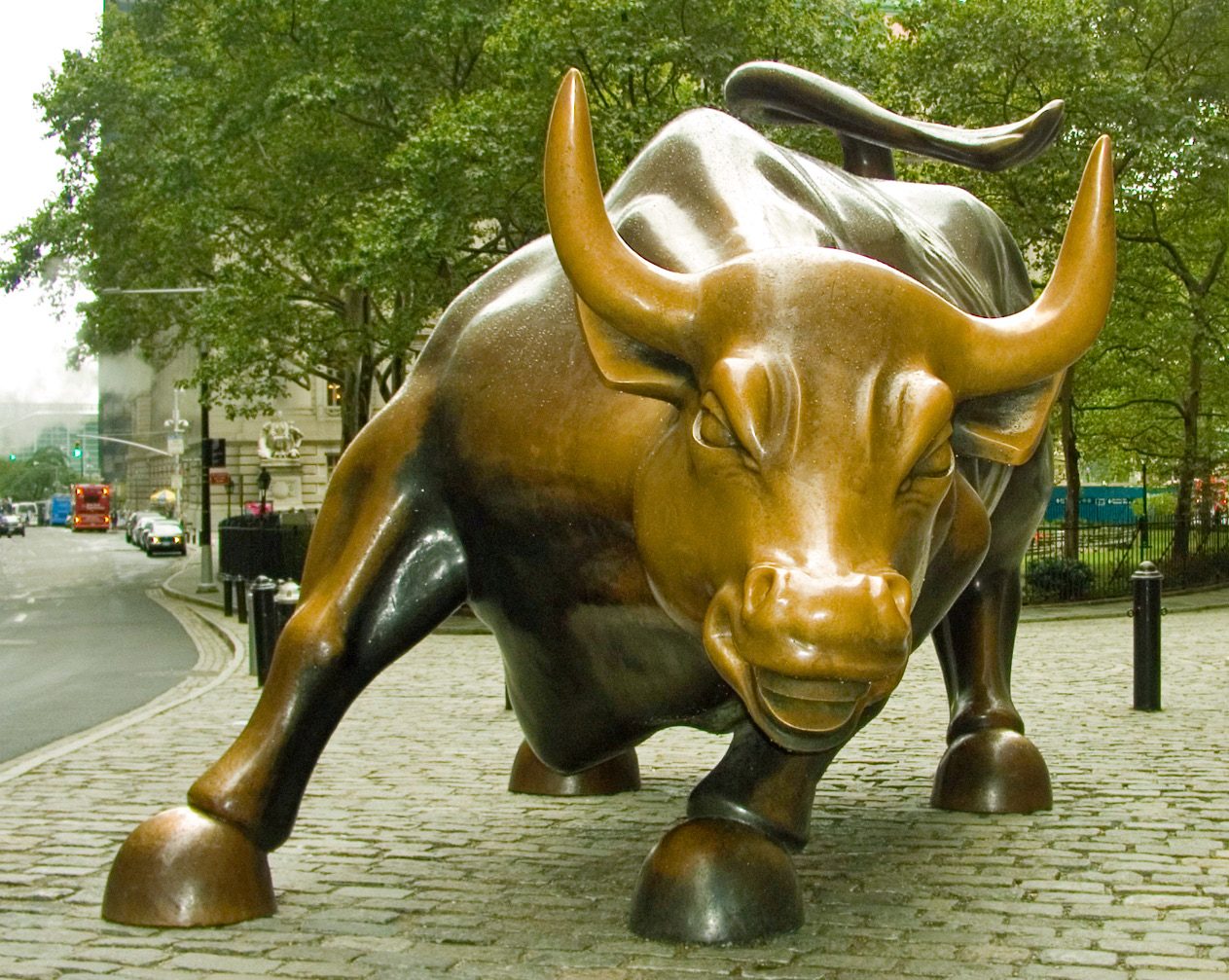 I know I know, you’re already angry at my title — but what is being “fearless” if not standing up for what’s right, even if it’s unpopular? I love you all, I love Intersectional Feminism, and that is why I cannot stand by Fearless Girl.

Fearless Girl appeared in Downtown New York City in 2017 as a piece of guerilla art, but she wasn’t the first…

Charging Bull first appeared on December 15th, 1989 at the base of a 60-foot (sixty! foot!) Christmas tree in front of the New York Stock Exchange on Broad Street. A shiny Christmas present to New Yorkers, the bull symbolized the strength and resilience of the American people following the devastating stock market crash of 1987. The statue was impounded, then relocated further downtown on Broadway at Bowling Green, where it remains today.

Both works had the intent to inspire and empower the viewer, but somehow, the presence of one alters the meaning of the other. Is that fair?

Ask yourself: is that FAIR? Imagine if Banksy snuck into the Louvre and painted a swastika hand tattoo on the Mona Lisa’s forehead to make her look like a skinhead, then everybody went around saying Leonardo DaVinci was a white nationalist. Does one artist have the right to directly alter another artist’s work to change the mean, to add their own commentary?

Unsurprisingly, Arturo Di Modica — creator of the Charging Bull — is not a fan of the Fearless Girl. From Wikipedia:

Okay. To summarize, Di Moda claims that the Fearless Girl turns his Charging Bull into a villainous character, while Kristen Visbal — creator of Fearless Girl — protests that she is “not defiant” in the face of the bull.

Unless the whole point is to turn the Charging Bull statue into a symbol of exploitative, patriarchal capitalism by placing the Fearless Girl with her hands on her hips where she can literally stare him down, then why even put her freakin’ there????

Why not put her in front of the New York Stock Exchange, where Charging Bull originally stood, where she can stare down Wall Street???

Why not put her around the corner from the Stock Exchange, in front of the Trump downtown building on Wall Street — you know, the one that Trump famously bragged had become the tallest building in Lower Manhattan after the Twin Towers fell…on 9/11???

I mean, Manhattan is only a couple dozen square miles, give or take, but there’s PLENTY of spots to place a statue of a brave girl. Especially if you claim, as Visbal does, that you mean no harm towards any other artists or their intellectual property.

And now, for the part that’s always sort of… rubbed me the wrong way about Fearless Girl.

So this statue appears to depict an thin, able-bodied, gender-conforming, prepubescent, Caucasian female.

If the empowerment of thin, able-bodied, gender-conforming, prepubescent Caucasian females inspires you, feel free to skip the rest of this blog. Goodbye! Nice having you!

Now, if you recall that it was thin, able-bodied, gender-conforming Caucasian females who voted for Trump in unprecedented droves, this sentiment of empowerment might ring a little bit hollow. I know, sis! I’m right there with you! And while I have no doubt that there are some good Feminists out there who happen to be white, White Feminism™ is unequivocally awful. White Feminism™ is indefensible. When I see this statue of this girl, I have a gut feeling that this could easily be an artist’s rendition of a young Taylor Swift. Or a young Ivanka Trump. Or a young Tomi Lahren. Maybe not. I hope not! But the shallow sentiment of a little white girl in a skirt and ponytail with her hands on her hips trying to be “brave, proud and strong, not belligerent” smacks of all the tenets of White Feminism™: “Girls can do it too! Women can have it all and still be pretty! Anything you can do, I can do better!” Nobody will disagree with that. In that way, this piece isn’t particularly incisive or clever. Everybody believes thin, able-bodied, gender-conforming, Caucasian women can and should succeed. What about everyone else? Are we just too scared to talk about everyone else? Hmm. Classic White Feminism™.

Then, there the’s the whole “Girl” thing.

I’ll admit, even I hesitate to be too critical of the statue of a “girl.” Girls in society are socialized to be treasured and protected, and they inhabit a sacred space in the public sphere. Girls are dainty, delicate, and meant to be cherished. Girls are sugar and spice and everything nice. Little boys are tough, they can take it. But you can’t mistreat a girl!

I can’t help but feel as though the choice to make this statue a GIRL was deliberate. And a prepubescent girl, at that! Can you imagine this statue a little older? Say, as a 14-year-old, with her back to the Bull, holding her arms up in a peace sign and taking a selfie with her bronze iPhone, in mockery of Charging beast behind her? Or how about a 30-something woman, putting her hand in front of the bull in a dismissive gesture, as if the Bull just shouted “HEY BABY NICE TITS” at her, a very common occurrence on the streets of Manhattan? Or an 80-year-old woman with a cane, seated on her own bronze park bench, keeping a watchful and haughty eye on the bull.

Why Fearless Girl gotta be a GIRL, tho?

Because even with her hands on her hips, this “girl” isn’t really a threat. She’s infantilized. Her act of defiance isn’t bold and inspiring, it’s cute. It’s cute, therefore it’s palatable, therefore it’s harmless. It’s milquetoast, it’s twee, it’s sweet. This girl isn’t old enough to take down capitalism, or run for President, or protest for her right to an abortion. Therefore, she’s just “cute.”

So, who is meant to look up to the Fearless Girl? Even…younger girls? Do they really need silent role models who refuse to get “belligerent” even in the face of fascism? Or do they need diverse, loud, and real women to look up to? Why aren’t we putting more of those around Manhattan? Why aren’t we fostering them to be all they can be, and why aren’t we recognizing them for their brilliance? Why aren’t we praising them on their own merit?

And ok yeah, making an intentionally-“crappy” statue of a dog taking a piss on the Fearless Girl‘s leg is an awfully funny way to declare your solidarity with “pro-feminist” causes, but then again…. so is placing flower crowns and Wonder Woman paraphernalia on a statue of Lil’ Miss White Feminism™.

Finally…. I hate this. I really hate this. I hate that I hate this! In 2016, the feminist rallying cry was to lift each other up, support our sisters (not just our cis-ters), unity for all women, hurrah! But the rude wake-up call that was the 2016 election showed us that female solidarity was a myth that us “true believers” fell for. Bland centrism failed us as women. Failed us spectacularly, and all of us will suffer — and those of us who were already suffering, stand to lose even more. The elderly? Single moms? The disabled? WOC? Sex workers? If there’s one group of us that might survive the next four year with minimal damage, it’s women like her — cute, little white girls. I refuse to accept this golden calf — sorry, bronze child — as a symbol of hope. She’s no Golden calf — she’s a Trojan horse, filled with bland ideology and marketable “Girl Power” that we can lean down and put an arm around and take a selfie with. She isn’t challenging anything. She isn’t challenging societal norms, or bulls, or anything. She’s bullshit. Plain and simple. And I’m sorry.