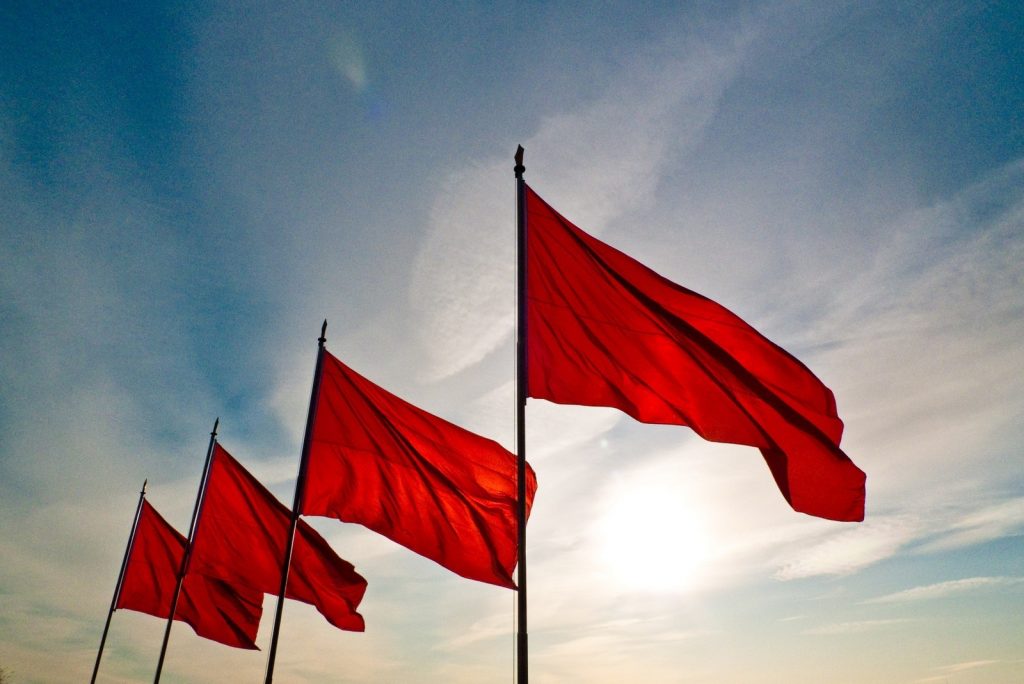 I am in a tizzy. I need to respond.

Basically, someone wrote this Mental Floss article about “Online Dating Red Flags” which is so horseshit, I couldn’t not say something. Sorry, Danielle Braff! Maybe you were assigned to write this article, and don’t actually believe this crap, but we have to pick apart these 8 bullet points because they’re so shit:

RED FLAG! OMG how awful would it be if you ended up dating a non-English speaker? I would just dieee!! Never mind the fact that plenty of people for whom English is a second language have better spelling and grammar skills than lazy turds who can’t be bothered to spellcheck their own dating profiles, this reeks of condescending privilege. I can’t even. Basically, we should be wary of anyone who sounds like they don’t speak perfect English because they’re obviously running a scam. What the actual racist fuck. I can’t even.

You wouldn’t book a model based on one headshot! Oh wait, no, you would. Maybe we should treat everyone we chat to on the Internet like a potential murderer or embezzler. One photo? Obviously a killer. Rolls eyes dramatically. Unless that one photo looks like a professional headshot, you’re probably fine. If it is a headshot, you might be swiping “OK” on an actor, that would be the real RED FLAG.

He, he, he? Obviously, this is bullshit heteronormative bullshit! “Men only want to have sex”?! Hello, 1952 is calling, they want their gender stereotypes back! FIRST OF ALL, that’s a harmful generalization, plenty of men want relationships as do many people of all genders, and scads of women and people of all genders want SEX! And also, WHO CARES? Sex is a perfectly good reason to be on a dating app. It is decidedly NOT a “red flag,” are you honestly shitting me.

“Always partying” might be a RED FLAG for Online dating….if you’re a time-traveling Victorian seeking a chaste husband/bride to bring back to your time period. Like, fucking really? Say, what if you  enjoy partying? Wouldn’t “partying” be a common interest then? This is just nonsense. Some people are partyers. Some people are homebodies. Some people only take pictures of themselves when they’re partying, and therefore, those are the photos they post of themselves online (as opposed to hiring a photographer to take photos of them cooking dinner at home or reading a book by a window on a rainy day, which they should post on their dating profile to prove that they have quaint, domestic hobbies? GTFO).

“Too Negative?” Somehow I feel as though this is directly aimed at women. “Smile, ladies! Don’t be too negative online!” “Oohhhh, nobody likes a sour puss!” <- is a statement which is inherently negative in itself. Toucheeeeeeee

Blurry. Photos. Blurry. Photos. No, you shouldn’t date someone unless their Tinder photos have been taken by a professional. SMDH. If I may speak from personal experience: the most “conventionally handsome” person I have ever dated had NO PHOTOS of himself on his dating profile. His bonkers messages that made me laugh out loud were what convinced me to want to meet him. So, kindly fuck off with your “appearance is everything” bullshit.

“Hello! I would like to go on a date with you but first, I would like to rule out the possibility of ever wanting to touch you, ever.” This is more slutshaming bullcrap! Assuming the dating profile you’re using isn’t exclusively aimed at forming asexual/aromantic partnerships (is there one? Can my Ace friends help me out on this?), then you’re probably on a dating site to Reach Out & Touch Someone (Eventually). In fact, I don’t mind AT ALL when people would message me upfront about their kinks. It didn’t matter to me! I’ve been on dates before with people who I sent VERY explicit messages back & forth with, and guess what? CONSENT STILL RULES THE DAY. These people still respected me when we met, and didn’t like throw a bag over my head and drag me into their van like an episode of Law & Order: SVU. I have sent and received many a “hey let’s make out” type message. They’re not universally Red Flags. Some people like to sext. Keep your judgement off the sexters, PLEASE.

WHAT DOES THIS MEEEEEEEAN? What is the ideal length for a dating profile, Mental Floss? Is 300 words too little effort? Is 650 overkill? You’re right, Red Flag Police. You should definitely rule out any prospective dates on the basis of their word count. “He seemed like a nice guy, but he needed to edit out too many superfluous adjectives. A pity, because I really wanted to fuck him, but he went 23 words over the limit.” Um, BULLSHIT.

Okay. So I’m being silly. But yes, there are some dating red flags you should worry about. Here they are:

If they message you a picture of yourself undressing, taken from outside your apartment window. THAT’S A RED FLAG!

If they ask for your credit card information in the second message, THAT’S A RED FLAG!

If they disrespect you or “neg” you in their message, THAT’S A RED FLAG!

If they say “This is your mother, is this the kind of thing you do on the Internet?!” THAT’S A RED FLAG!

If they message you your Social Security Number, THAT’S A RED FLAG!

If they give you a nickname in the first message, THAT’S A RED FLAG!

If you don’t reply to them for an hour and they send a string of increasingly more violent messages because they’re angry at you for “ignoring them,” THAT’S A RED FLAG!

If they have an emoji of a frog or a glass of milk in their profile, THAT’S A RED FLAG!

Bottom line? Don’t slut-shame. Nobody owes you anything. “Glass of milk” emoji is code for white supremacy. Get consent before sending/receiving nudes. Non-native English speakers deserve love, too. Be nice!