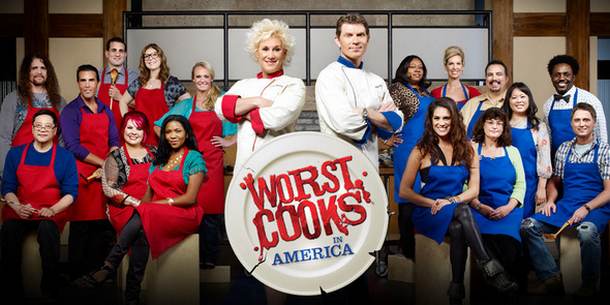 Remember back when we cared about things like Kardashians and who was going to win The Bachelorette? You know, before the Nazis silently took over our country and we were all murmuring to each other in disbelief: “how much worse can it get?”

Life after 11/9 has been one long inhale that I’m still holding, holding, holding. 11/9 —that’s the day after the disastrous election. Fittin’, ain’t it? That the terrorist strike on American soil on 9/11 should have reached its inevitable conclusion, the destruction of American civilization, on 11/9. Anyone else love parallels and symbolism?

Shit, I used to. I used to do a lot of things! Plan for the future. Trust that everything would be okay. Leave the house on a regular basis! There’s really only one thing that still “does it” for me that I loved pre-11/9, and that’s heckin’ Reality TV.

I would like to thank shitty reality TV competitions and boring, bland celebrity worship shows and banal dating elimination shows for reminding me of a time in American history before, you know, America was over with. Almost every other form of entertainment has been ruined for me:

Documentaries: “oh fuck we’re fucked way worse than I realized”
Speculative/Science fiction: “we’ll never fucking live on Mars at this point, with everything so fucked.”
Political dramas: “President Bartlett would never have fucked us like this.”

What is there to do now? Besides listlessly trying to go through the motions of living. Forgetting to eat. Lighting candles. Checking my Instagram. Calling politicians to awkwardly beg them to stop fucking everything up, please and thank you. And watching Worst Cooks in America.

In the penultimate episode of the first season that’s available on Netflix, I broke down in tears when the contestant who went home that episode (spoilers!) hugged his wife. He lifted her off the floor, hugging her so hard. And I felt my face crumple and tears well up. Here was this time capsule of a moment in the past, when the shadow of fascism and destruction didn’t loom over everything. A sweet and simple time, when a man trying to cook a pork chop (without poisoning Bobby Flay) hugged his wife, and everything was good.

I was almost angry at their happiness in that moment. Angry! Because I don’t know if I’ll ever feel that carefree, happy, and frivolous again. I’m angry for my entire generation: we were raised to believe that if we worked hard, we would succeed. We played by the rules, all the while right under our noses, our futures have been stoled from us. I think about it too hard, and a twinge of pain starts up in my forehead.

I turn the lights down, lower the volume, pop an Ibuprofen and pour a glass of seltzer, then start the next episode. God damn it all, I can at least give this way of life the middle finger by refusing to live in it: by burying myself in the alternate reality of reality TV.